One futurist has opined that with the data-gathering technologies coming by way of the American farm, managers will need to master the skills of three-dimensional chess to bring it all together.

Data will be the disruptor -- even the destroyer -- of business models through all the years of the 2020s. It will sow for those who tame its real-time solutions and undiscovered opportunities.

"We're going to disrupt some things in agriculture," says Steve Gerrish, of Gerrish Farms, outside Rockville, Indiana, of the coming decade. "But, it's time we shake the bushes a bit."

His concept? Use live data collection to identify unique traits in the field, segregate and package them in the field and ship them directly to buyers. "Farmers want to go in this direction," Gerrish believes. "We're trying in a positive way to disrupt agriculture, to change how we think about [farming]."

Matt Danner farms in western Iowa, near Templeton. Data intrigues him. "Do we need more granularity in what we already have?" he asks. "Or, do we need smaller bits of clean data still not collected today to create a better picture? Maybe the missing link is still missing. How do we make sure that intelligence gets back onto a piece of equipment? How do we automate an experience?"

And, automate that experience from the moment a product (seed, chemical, nutrient) passes through the farm gate until it is probed and measured in the harvested crop.

Making Danner's data actionable is important to him. "We're so data rich, and yet we're so information poor," he says. "We plant the same hybrid across several farms in dozens of different moisture levels, different heat units, planting dates, elevations, and then we collect the various yields and test weights," he says. "Tell me something about all that. Tell me five things about that hybrid in those varied conditions that I can use next year."

Brad Arnold is vice president for Global Crop Cycle and Fuse Connected Services at AGCO. He is focused less on the actual shape of machinery (cab/no cab) and more on outcome. "Do we envision swarms of operator-less machines working in the fields? I don't know. What I'm not confident in is what will equipment look like in the future," he says. "But to me, the best value we can provide farmers is understanding the outcomes they are trying to accomplish during different parts of the growing cycle. How do we add more sensors and more control to some machine to better accomplish outcomes based on conditions in the field?"

Gerrish wants his data take to be predictive. "Farmers don't want to be morticians," he says. "Farmers would rather be proactive than reactive to challenges in the field. [Can] we fix something before it happens?" he asks. "Can we ID and kill weeds in one action; can we dig down into the soil [on the go] and find disease or nematodes? I don't want someone coming back and telling me that I need to do something. Tell me what you've done."

Brett Arnusch, one of Progressive Farmer's 2020 America's Best Young Farmers and Ranchers, was hired by his father's Marc Arnusch Farms as its new (and first) "data comprehension manager." The operation, near Keenesburg, Colorado, has seen its data take explode from 3,000 data points to 3 million.

"All that time and all those numbers mean a lot to the farm," he says. "They translate to work in the field. They might show that maybe that extra pass through the field with the tractor isn't worth that spraying task."

Arnusch's work has already produced savings in the farm's tillage and irrigation budgets. He believes that a deep data dive into a wheat variety also gave Arnusch Farms a leg up in Colorado's distillers' markets.

Data surely will drive productivity and profitability in the 2020s, AGCO's Arnold says.

"Where farmers make better, real-time decisions I would hope we would have helped farmers increase their productivity and profitability by 20%," he says. "Not because we removed an operator from the cab but because we have brought real-time sensing and control capability that secured the outcome of the planter pass, the tillage passes, applicator passes and in harvesting." He points to the SmartFirmer from Precision Planting. "We are reading soil organic matter real-time and adjusting seeding and fertility rates on the fly."

Leo Bose, Advanced Farming Systems harvesting (AFS) marketing manager at Case IH, says data demand has grown like an ocean wave. "Five years ago, we began to see this craving for data. [Farmers] wanted to see where machines are in the field. Now, they want to look at yield data, as-planted data, as-harvested data, and make correlations between those [measures] and inputs."

Farmers crave that data and the control that comes with them.

"We command units to do more precise adjustments in the cab through fields with changing field conditions," Bose says. "That's the bigger win for the customer, because all that ultimately impacts yield potential, and that will drive profitability."

Five out 10 Case IH Axial-Flow 250 Series combines are being ordered with its AFS Harvest Command. The technology offers four modes of performance tuned by 16 sensors that optimize seven settings to maximize grain quality and grain savings regardless of the operator's skill level.

Bose's view out to 2030? "Soil makeup doesn't really change," he says. "But, the equipment touching that soil needs to be connected. Soils vary in how they like to be worked. If we can understand soil variability ... we can use that data to drive decisions in the field, to make adjustments on the fly."

So much of farming is visual, Chaney says. One shade of green tells a story different from another shade of green. Each plant matters. "We like to say make every seed, every drop and every kernel produced count," he says. "We are developing new sensing, computing and user experience capabilities that will enable our customers to reach new levels of productivity [down to the plant level]," he says.

One example is Combine Advisor with ActiveVision Cameras. The package includes seven automation technologies to maintain performance no matter the moisture or crop conditions.

The ActiveVision system uses cameras on the clean grain elevator and tailings elevator to help operators see what's going on. Essentially, the cameras are the eyes on the combine for quantifying grain quality and signaling a control algorithm that maintains loss and grain-quality expectations.

"It is one of our most significant improvements we have delivered thus far," Chaney says. "Our goal is to reduce complexity such that it will be [so much] easier to manage and improve crop yields." Depending on the crop and conditions, this system can save $5 to $15 per acre.

Sensors and data interpretation are only going to get better in the 2020s, Colorado's Arnusch says. "The level of data comprehension we have today is just a stepping stone to the advanced data [resources] we will have in the future," he points out. "It will say, 'Hey, we are going to be getting some stripe rust here pretty soon, you might want to think about spraying.' [Data] will truly take precision to decision. It will be prescriptive and predictive." 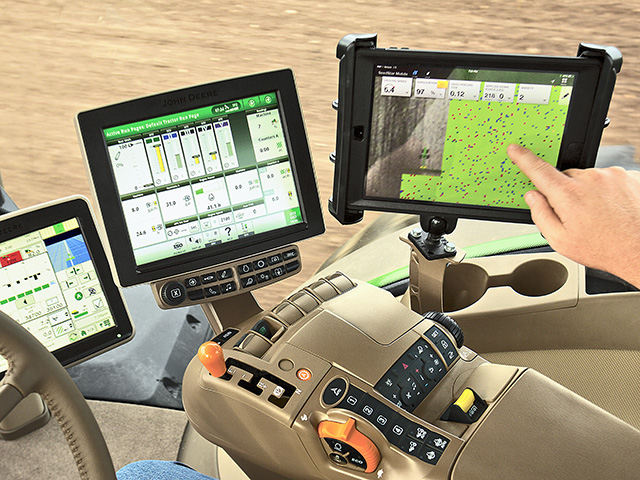