An unconventional way to increase soybean yields and revenue may be already sitting in farmers' machine sheds.

One of the easiest and most economical ways to boost production nationwide is to plant early, which typically means at the same time as corn, soybean specialists explain. But, many farmers own one planter, and they traditionally plant corn first. It's an understandable decision since corn seed costs more and higher-yielding, later-maturing varieties need more time to grow.

A farmer could spend tens or hundreds of thousands of dollars on a new planter or grain drill and the help to operate it, or hire a custom applicator to plant both crops at the same time. Or, he could continue down the traditional path.

It's a dilemma many farmers face. Neither solution was palatable to Mark Muench, especially with cash soybeans hovering around $9 per bushel. So, the Ogden, Iowa, farmer decided to solve the problem by using equipment he already had to adopt a little-used planting practice.

A successful test last year convinced Muench to broadcast-seed all his soybeans this coming spring -- more than 1,100 acres -- as soon as weather and soil conditions allow. He'll use a modified 40-foot Salford 2200 vertical-till machine and an 8-ton granular applicator cart to incorporate soybeans as his two employees plant corn.

"Tradition is a farmer's biggest hang-up," Muench asserts. "I'm interested in improving, not doing the same thing or worrying what others think. This works.

"I said (last) spring this may be one of the craziest things I've done," he continues. "But, I like making money, and yields are on a steady climb."

"Many farmers still think they can plant on May 15, and it doesn't hurt yields," says Shawn Conley, University of Wisconsin soybean specialist. "There can be up to a 10-bushel advantage planting three weeks earlier."

Muench wanted to see for himself. He worked out a deal with a neighbor to drill 400 acres of soybeans in 2018 during the third week of April as he planted corn. The rest of his soybeans were planted in mid-May. Sure enough, the earlier-planted soybeans yielded 10 bushels better.

"You hear stuff, but when you see results in your own fields, it makes a believer out of you," Muench says.

The same fall, Muench planted 400 acres of cover crops with his Salford 2200 and granular cart. The 2200 has a cover-crop kit that includes a blower, lines and diffusers to blow seed in front to be worked in.

"It worked so good, I thought, 'Why couldn't it work for soybeans'," Muench recalls. "Like most things I've learned in agriculture, I stumbled into it."

Muench broadcast-seeded 800 acres of soybeans last spring from April 19 to May 3. A neighbor drilled the same amount during the same time frame.

The broadcast-seeded soybeans, which averaged 65 to 70 bushels per acre (bpa), consistently outyielded the drilled soy by 5 bpa. Corn was planted simultaneously.

"I think the Salford helped chew up some trash and blackened the dirt to warm it up faster, which promoted faster emergence," Muench surmises.

He believes early planting and working in broadcast soybeans provide a yield bump of at least 15 bpa. Fellow farmers in Boone County averaged 55.7 bpa in 2018, according to U.S. Department of Agriculture (USDA) records.

"You can't make a living on county averages," he says.

Broadcast-seeding soybeans has never been a popular planting technique outside of wildlife food plots. It wasn't an uncommon practice for commercial growers in the early to mid-1900s, but it fell out of favor as planters and grain drills became bigger, better and more technologically advanced.

Only one farmer in Iowa reported planting soybeans with a row width of fewer than 7.5 inches, which includes broadcast-seeding, according to the latest USDA statistics. Row-width or broadcast-seeding data weren't available in other soybean-producing states.

Still, Muench and Conley say the seeding practice can be effective with the right equipment and adherence to basic agronomic principles. While neither believes broadcast-seeding will surge in popularity, they say it's an option to think about since many farmers have tillage, dry fertilizer, chemical and cover-crop applicators that could do the job.

"Unlike corn, you don't need soybeans to come up like a picket fence," Conley says.

"As long as you get fairly uniform seeding depth (1 to 1.5 inches deep) and good seed-to-soil contact, who cares how you get it in the ground."

Muench's cart's metering system allows him to control plant population, which is targeted at 130,000 seeds per acre this year. The Salford 2200 -- Muench is a dealer for the company -- has rolling baskets and harrows in the rear to uniformly incorporate seed at about 1.5 inches deep. He also rolls fields to ensure good seed-to-soil contact, which he does regardless of how seeds are planted. He can plant 300 acres a day.

Broadcast-seeding soybeans can create multiple challenges for farmers, experts contend, and it's not recommended for every part of the country and soil type.

There are no rows or tram lines, so some soybeans are run over while spraying. Depending on timing and boom width, this can equate up to a 2.5% yield loss. Adequate help is needed to operate two planting crews.

Angela McClure, soybean specialist with the University of Tennessee Extension, doesn't recommend broadcast-seeding to plant early because tillage is needed for seed incorporation.

"Many farmers in the Southeast who plant in highly erodible ground depend on no-till to protect their soil," McClure says. "So, we don't encourage broadcast planting."

She adds, "Our growing season is longer than Iowa's or Wisconsin's, and we don't always see big yield increases with very early planting. Planting with a drill would give narrow rows and the weed suppression, and might be an option for early planting if the planter is tied up in corn."

Officials recommend farmers nationwide check with their crop insurance provider to see if broadcast-seeding soybeans is an insurable practice. Rules differ by county and around the country.

In Boone County, where Muench farms, the practice is considered nonconventional but is insured as long as seed is incorporated in a timely manner, explain crop insurance experts with Farm Services of America. It's then considered a "good farming practice" by the USDA Risk Management Agency.

Equipment and Cost To Broadcast-Seed Soybeans: 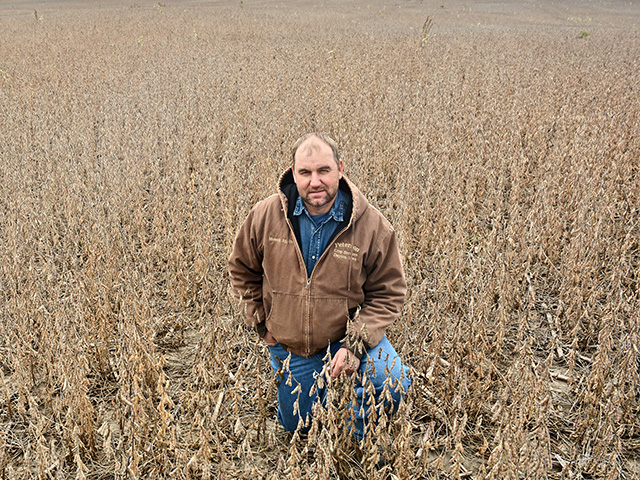