While some farm operators will struggle to pay their bills this year, landowners are not expected to be all that sympathetic. Cash rents aren't projected to climb in 2020, but they're not likely to go down either.

Mark Ruff, a corn/soybean/wheat farmer in central Ohio, agrees with the consensus that there will be little change on the cash-rent front for the upcoming season.

"It may not be economically sound, and it's not necessarily what should happen, but I doubt anything will change land rents for next year. A $70-per-acre MFP (Market Facilitation Payment) ... does not make up for the loss of yield and the loss of exports. It stops some of the bleeding, but it doesn't make your operation whole," he says. "I question whether the MFP payment should be shared with the landowner when we are just hanging on."

Ruff says they've been trying to switch to more flex acres with their landlords but notes it's a mixed bag.

"Your base has to be low enough for that to make sense for the operator. If it's not below market rate, what's the point? It should be 80% of fair market value. But, it's a tough sell to guarantee less to the landowner now for the possibility of gaining more in a good year. The further landowners get from the farm gate, the harder it is for them to understand how the variability [in farm profit] works."

Some of the highest rental rates in the country are found in Illinois, where farmers will see on average $100 less in per-acre revenue in 2019 than they did a year ago. USDA reports the state's average cash rent stands at $224 per acre, steady with 2018 levels of $223 per acre.

Landowners want to hold rents steady, but they are concerned about getting paid. The top two questions they ask farm-management specialist Steve Johnson are, "What's my tenant getting for an MFP payment?" and "Will my tenant be able to pay their cash rent?"

Farmland owners expect their Midwest tenants will get around $70 per acre in MFP payments. In addition, they watched prices rally this summer.

"So, they're not willing to come down much on rents in our area," reports Mark Nowak, farm business consultant in Wells, Minnesota. "In south-central Minnesota, I don't see rents changing much from the $240 to $260 per acre range where they've been the past couple years."

Nate Franzén, president of the ag banking division of First Dakota National Bank, in Yankton, South Dakota, says there are still highly efficient, profitable operators who will pay up for rent in 2020.

"I don't think cash rents will come down a lot. You'll see some variance by neighborhood, but generally, if someone wants to put something out there for rent, there are some who will pay the going cash-rent rate, even if it's high," Franzen explains. "You might see more delineation between high-producing land and more marginal ground. It comes down to supply and demand. Good land in short supply will bring a high price."

He adds he senses a peak in farmers' frustration levels following challenges brought about by abnormal weather, along with trade issues and declining ethanol demand.

"But, it's hard to quantify," he notes. "I'm actually more positive today than I was in April and May. Since then, there were some opportunities to lock in a profit. Also, we thought interest rates might go up two or three more times, and that doesn't look like it will happen. Don't get me wrong, it's not a cakewalk out there."

LAND IS THE NEW SAVINGS BOND

Ben Riensche, a corn and soybean farmer in northeast Iowa, also doesn't anticipate much movement on cash rents this year. He believes market disruptions and yield declines should put downward pressure on rents, but says the system isn't built that way.

"The more I think about it, the whole system seems hell-bent on protecting land prices and cash rental rates," Riensche says. "Where would rents be going this year if we didn't have MFP, prevent-planting option and subsidized crop insurance? Investing in land is like investing in a savings bond. Like savings bonds, farmland costs a lot, and the returns are slight, but the investment is basically riskless.

"The farm operator, staggering from years of trying to hold onto land to distribute bloated fixed costs ... simply doesn't have the reserves or the working capital to continue to reward landlords," he continues. "Then, the government steps in with subsidized crop insurance premiums, prevented-planting payments and MFP payments, which the farmers simply need to 'keep the wheels on the bus,' and the cash rent gets paid."

Leasing land continues to be a highly competitive area in agriculture, with someone else usually willing to step in and pay top dollar for acres that become available.

Those rates are key, but relationships do still matter to many landowners, advises Nate Franzén, president of the ag banking division of First Dakota National Bank, in Yankton, South Dakota.

"We've seen operators work with their landowner, showing them their financials and explaining how it's not working for them today. And if they've been a big help to the family ... digging them out in the winter, etc., a lot of times the landowner will understand and work with the operator."

Franzén's advice for farm operators? "Be the best tenant you can be." That includes good agronomics, clean fields, clean roadsides.

If the owner lives in the community, help him or her out. Have honest, open and continual communication. Explain technology in a format they will understand. "Every rural community is hungry to keep young people there. If you are a young farmer, show the owner that you care about your community and neighbors. There is value in goodwill," Franzén notes.

As in any relationship, communication is key. Kevin Green, an eastern-Iowa farmer in DeWitt, distributes a newsletter to his landowners. In addition, he holds a monthly "Refresher" where he meets with landowners for refreshments and to update them on what's happening on the farm. An annual get-together in August is held at a local winery. Written communication is also important. Green learned this the hard way several years ago when rents were rising. He talked to one of his landowners in August and offered to pay an additional $30 per acre. The owner wanted to wait and see what the markets would do. In December, that owner called Green and asked him if he would offer more. Green said that was about as high as he could go (thinking they were including the additional $30 an acre he had previously offered). The landowner rented it to someone else for less than the additional $30 Green offered because the owner thought Green was only offering what he paid the previous year.

"I've learned to put everything in writing now," Green says. Even the little things can make a difference. "You'd be surprised at how much an owner values getting fresh sweet corn delivered to them in the summer," Green shares.

In the end, though, there may also be some ground you need to be willing to let go.

"The first time I let some land go that the owner wanted $300-per-acre cash rent for, I worried about my reputation," Ohio farmer Ruff says. "Did people think I was in trouble financially? But, after I did it, I was so glad. Comparing the numbers, there was no way I could improve that farm enough to make it pay."

Green had one area farm owner ask him, "Are you the one who pays for tile, removes trees and cleans up farms?" Green says he walked into that trap with a "yes." The owner wanted Green to do all that for free and pay market rent.

"I turned him down. That farm needed a lot of work. I would have lost money."

Not all ground is worth farming. 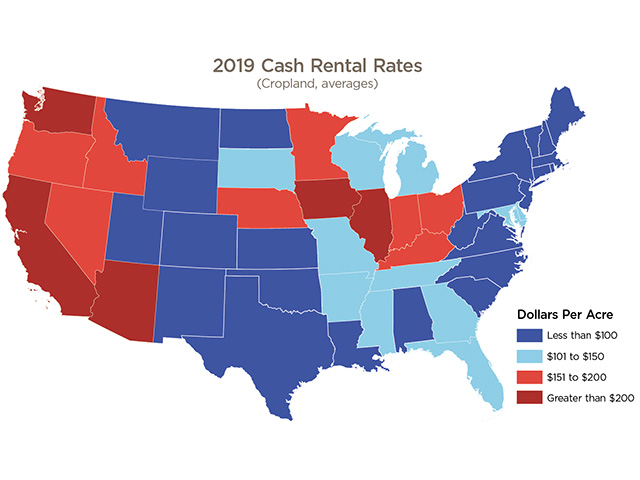