Nitrogen application in fall may become the next Blockbuster Video.

Jason Webster, commercial agronomist for Precision Planting, used the analogy during a recent field day at the company's Precision Technology Institute (PTI), its research farm in Pontiac, Illinois. He told farmers that knifing in anhydrous ammonia, a popular nitrogen (N) fertilizer, after harvest for next year's corn crop may disappear like the once-popular video store chain.

"Ag retailers say you will never get rid of fall (anhydrous) ammonia," Webster told farmers as they surveyed nitrogen research plots. "I told one major retailer, 'Do you ever hear of Blockbuster, beta and VHS anymore?'"

Farm practices evolve with the times, Webster adds. Farmers can't afford not strive for continual improvement, and that includes fertilizer.

Agronomic, economic and environmental factors have farmers reevaluating fall-applied N in favor of spring preplant, at planting and with sidedress applications. Advances in fertilizer formulations and applicators also provide increased flexibility on when N can be applied.

The grain and livestock farmer says climate and safety are factors. Yields and efficiency were his primary motivation to abandon spring anhydrous ammonia in the 1980s in favor of liquid N.

"It's the best thing we ever did on our farm, and our yields show it," Kalb says.

Commercial corn production averages increased from about 200 bushels per acre to about 260 bushels, he states.

While spring preplant, plant and sidedress N applications aren't necessarily easier, Webster says they are more efficient and better for the environment. Nitrogen is applied closer to when corn needs it instead of seven to nine months prior, which increases the chance for leaching. Corn takes up half its N supply between the V8 to VT growth stages.

"It's more efficient banding N on both sides of corn seed at planting," Webster contends. "As roots grow at a 35-degree angle downward in the soil, they are going right through the band of N and don't have to search for it."

Many agronomists, researchers and farmers agree less fall N is being applied to future corn acres. The trend toward more spring and in-season N started more than a decade ago, experts say. Agronomic, economic and environmental reasons top the list.

But, the conclusion is more based on observations and conversations with producers than specific nationwide government or industry data. The U.S. Department of Agriculture (USDA) tracks annual N usage for corn, but application timing data is extremely limited.

"I am not aware of historical survey data on it," says John Sawyer, an Iowa State University (ISU) agronomy professor and soil fertility expert. "Is it [spring and in-season N] increasing? Probably, but I just don't have the specific data to definitively say yes or no."

Corn acres have increased the past two decades from 79.5 million acres in 2000 to 89.1 million last year. Acres exceeded 90 million several times since 2007.

The only USDA survey of N application timing for corn was in 2010. The breakdown, which covers respondents' multiple-season applications, includes:

Some states such as Illinois keep track of N sales in six-month increments. Dan Schaefer, director of nutrient stewardship for the Illinois Fertilizer and Chemical Association (IFCA), says the numbers are a good indication of application timing.

About 310,000 pounds of N was sold in November 2007 compared to 140,000 pounds six years later during the same month, according to the IFCA. Another good indication of less fall N and more split applications.

"In Illinois, we've seen a slow progress away from fall N, which is indicative of what's happening nationwide," Schaefer says. "The movement is happening due to more farmers following the 4Rs--right time, right source, right rate and right place. The further out you put it (nitrogen) in, the more loss you can expect."

Sixteen corn nitrogen programs were tested last year at the PTI farm comparing single, dual and triple applications. These consisted of preplant weed and feed, banding at planting using Precision Planting's Conceal dual band (a backswept knife located in the center of a planter's gauge wheels) and V6 sidedress using a coulter rig or a combination of the three. N applications ranged from 150 to 250 pounds per acre of mostly 32% UAN (urea ammonium nitrate).

Even though fall N wasn't included in the studies, Webster is convinced spring and in-season programs are economically and agronomically better. Iowa State University research from 2007 to 2009 shows corn yielded consistently less after single fall anhydrous ammonia applications ranging from 80 to 200 pounds compared to equivalent preplant and sidedress applications.

"I think fall N is going away, or it will at some point," Webster says. "I don't think anhydrous ammonia will go away; we just need to be smarter how we use it."

Sidedressing anhydrous ammonia at the V5 to V8 growth stage is a good practice if part of a planting and preplant N program, Webster asserts. He says the expense to outfit a planter to apply nitrogen and the time it takes during planting is worth it.

Webster says his 70-year-old father refused to do it until studies showed otherwise.

"I know running N on the planter is hard, but you can get rewarded with an extra $70 or more per acre," Webster claims. "I do see more liquid applications at planting than in the past."

Jeff Vetsch, University of Minnesota soil fertility and nitrogen management specialist, believes there's a movement toward more split-N applications in the spring and summer, and less in the fall. But, he doesn't think it will go away.

"Anhydrous ammonia is still a solid option in the fall with a nitrification inhibitor if applied late when soil temperatures are below 50°F," Vetsch says.

Mark Tinnes, a grain and livestock farmer from Keota, Iowa, will continue to inject fall anhydrous ammonia as part of his corn fertilizer program, which includes a weed-and-feed preplant application and one sidedress pass.

Tinnes doubts fall N will ever go away since the infrastructure is in place, and farmers like him need to spread out their workload. He's also the agronomy manager at Vision Ag, in Keota.

"I really don't see us switching away from fall," Tinnes says, noting tighter weather-related planting windows like this spring. "It's motivation to get it on in the fall."

But, he understands persistent, heavy rain events, which promote N leaching, has convinced more farmers to sidedress to ensure enough N is available when plants need it.

"We're definitely seeing more of that," Tinnes continues. "It's an agronomically sound practice."

Kalb's commercial corn fertilizer program consists of turkey litter and banding 20 gallons per acre of 32% UAN with the planter, along with other nutrients. He also makes at least two in-season sidedress passes with his Hagie sprayer. UAN is applied via Y-Drop based on tissue samples. Total N rates vary from 150 to 225 units per acre.

"Spring is better than fall (for N application), but if you can feed the plant two to three times during the season ... it's much more efficient and productive," Kalb says.

Banding and sidedressing ensure corn has easy access to N when it needs it the most, he asserts. The corn yield champ hasn't cut back on nutrients, but he hasn't increased N use to get more bushels. His contest acres do have a different N program.

Nitrogen use nationwide has gradually increased, but so has N use efficiency. A Purdue University study shows improved corn hybrids now use 1 pound of N to produce 65 pounds of grain compared to 42 pounds decades ago.

Applying nitrogen in the spring instead of the fall doesn't always mean higher yields. University of Illinois on-farm trials comparing N rates applied as ammonia in both the fall (with an N-Serve) and spring found little or no difference in yield responses.

ISU and other university research do not show consistent increased effectiveness of sidedress applications compared to spring preplant N use.

"If anhydrous ammonia is applied in the fall with an inhibitor, the performance is fairly good," Vetsch says.

Doug Haren could barely get through knee-high or taller corn July 15 with his seven-row toolbar with coulters, with an anhydrous ammonia tank in tow. Typically, the Grundy Center, Iowa, farmer would never sidedress N so late in the year or this tall, but the late, wet planting and early growing season dictated it.

Still, Haren wouldn't have it any other way. He believes knifing in 135 pounds of N per acre once corn hits the V4 stage, along with about 25 pounds per acre at planting, are environmentally and agronomically sound practices.

"You can argue all day with people how much leaching occurs with fall N application, even with a nitrification inhibitor," Haren says. "I'm not a believer in fall N. If it isn't in the field, it won't go away, so I can put on 20 to 30 pounds less per acre in the spring.

"There's little chance of (spring and in-season applied N) getting in the water because the plants use it so soon," he continues. "It's more environmentally friendly, and I like my yields (220-bushels-per-acre average)."

Haren thinks the trend of less fall N application will accelerate as water-quality concerns increase. Nitrogen eventually breaks down into nitrate, which moves with water through soil and tile lines, and into waterways and drinking water supplies. High concentrations of nitrate can be harmful to humans, especially infants. The federal drinking water standard is 10 milligrams per liter.

Ingrid Gronstal Anderson, water program director for the Iowa Environmental Council, says the group is "looking at" supporting measures to regulate N application in the state.

"It's definitely something we talk to experts about and try to figure out policy implications of different approaches," Gronstal Anderson says. "Fertilizer application timing and rates affect water quality."

Haren thinks it's only a matter of time before nitrogen is regulated in Iowa like in other states.

Rod Sommerfield, who farms north of Rochester, Minnesota, says the state should have enacted nitrogen rules 50 years ago. He grows corn in an area prohibited from applying fall N starting in 2020.

"It's eight months before plants need it, why apply it?" asks Sommerfield, noting he puts on N just before, during and sometimes after planting.

It's the right thing to do environmentally and economically, he believes. Not counting land costs, Sommerfield claims he spent $1 per bushel to raise corn from 2014 to 2018.

"That makes us very sustainable," he says.

> Corn takes up half its nitrogen (N) supply between V8 and VT, a period that may comprise 30 days. Providing adequate N for this period is a key goal of N management.

> Spreading N applications is a good way to spread risks and reduce costs, but the extent to which this is practical depends largely on prevailing weather conditions.

> Fall-applied N is at the highest risk of loss. In all instances of fall application, only anhydrous ammonia should be used, as well as a nitrification inhibitor.

> Preplant N application may be considered in areas where growers are able to complete this practice without delaying planting beyond the optimum window.

> Planter N applications are sure to occur, unlike preplant or sidedress applications that may be disrupted by the weather.

Farmers can learn more about nitrogen management, application and timing for corn by visiting: 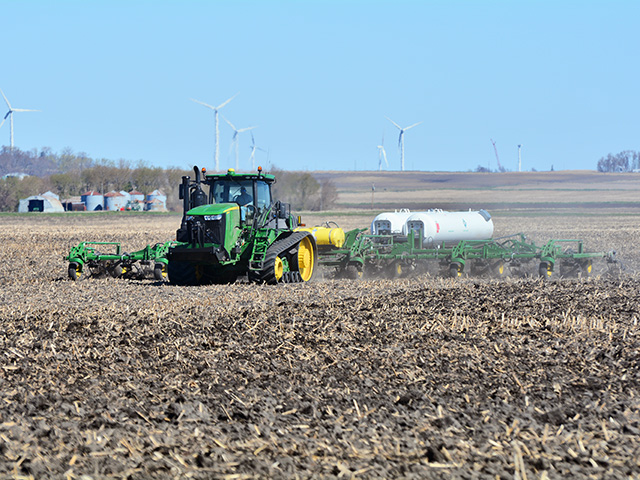