It takes some people a lifetime to find their passion. Matthew King realized after graduating with a degree in microbiology that all he really wanted to do was raise cattle. It was an aha moment that required a pretty drastic U-turn, complicated by the fact that King had dispersed his cow herd during his college years. The fifth-generation cattle producer was starting over.

"I guess raising cattle and living on a farm was something I tried to run from. But, it turns out it was also one of the things I enjoyed the most," King says.

The Mississippian may have felt he was starting over, but in reality, he brought a lot to the table. He had cattle in his genes and a lot of technical knowledge. Those two things with new, less-expensive options for improved herd genetics are affording him a means to rebuild a genetically superior herd from the ground up.

King started back into the cattle business with a small commercial cow herd he describes as mostly Angus-influenced. To get heterosis benefits from crossbreeding, he artificially inseminates (AI) most of these cows to Hereford and Brangus bulls.

A commercial herd wasn't all the producer wanted, though. His goal is to make a place for himself in the seedstock side of the business, as well. For that, he decided to focus on Brangus. It was a choice he based on the breed's heat tolerance and hardiness, big pluses in south Mississippi, where humidity and high temperatures can drag some cattle down. He is also genetically emphasizing marbling to maximize returns on feeder calves he markets.

King started this seedstock herd with one donor cow and outside embryos. He flushes this donor cow each year, implanting any embryos they get from her.

"I also selectively buy embryos from around the country, trying to get the best genetics possible into this herd. The price of individual animals of this caliber is prohibitive for me, but I know I can buy those same genetics as embryos for a lot less. That was the route I chose to take to build this herd," King explains.

King uses some of his commercial cows as recips and hires an embryologist to implant embryos. The recips chosen are his best-milking mature cows. Conception rates on embryo transfers (ET) were 67% last year.

Cows that don't conceive are turned in with a Hereford cleanup bull. This helps King visually sort out which calves are embryos and which are natural service, because the recips are black-hided, and those natural-service calves are usually easy-to-spot baldies.

Fellow rancher and area veterinarian Nancy Jackson has worked with King for about seven years. She preg-checks the herd and helps King with herd development. She notes the use of technology to build a herd has pros and cons. Success is possible, but a producer has to be committed to the process.

While use of ET is becoming more common in the industry, Jackson cautions embryo buyers need to have a good understanding of the process and work with breeders they trust to provide high-quality embryos.

"As a purchaser of embryos, you are really relying on that quality," she notes. "From the breeder's standpoint, you want to get as many embryos from a flush as you can and then freeze them. There can be pressure on an embryologist to keep as many embryos as possible. That is an understandable pressure. As a buyer of embryos, however, you want to get the best quality possible, because otherwise, your conception rates won't be what you want."

The highest success rate, she adds, comes with the use of fresh embryos, where they go from flush cow to recip cow. This is a delicate procedure, where timing is everything. Recips have to be developed and ready using synchronization to ensure they are in estrus. This is a bit of a guessing game, because you don't know how many embryos the donor cow will provide when she is flushed. So, while the technology can be wonderful, Jackson says like everything else, it comes with uncertainties and a degree of risk.

King has been unusually successful with his ET program given that 67% conception rate. After the ET and AI work is complete, he relies on cleanup bulls, a process which, on the whole, takes herd conception rates to 95%. He typically keeps four to five cleanup bulls.

Recips and first-calf commercial heifers start calving in mid-October. Everything else calves in November, with the window closing at the end of December.

"We try to keep calving season tight. I work off the farm, so the more I can tighten up that window, the better. Ultimately, I'd like to get it to 60 days. Actually, I'd really like to get it to one day, but we all know that's not going to happen," King laughs.

AI and natural-service bulls are selected with an eye toward maternal traits, good temperament and a moderate frame--meaning 1,300- to 1,500-pound cows.

"We tend to select bulls that have been proven but are not the latest and greatest things on the market today. We find that by using some of the older bulls, we get a more competitive price, which is important when you're building a herd," King says.

Calves are jointly marketed with veterinarian Jackson out of Southern Cross Farm, at Eupora, Mississippi. Together, the operations can sell a truckload lot and maximize returns. There is no retained ownership, but King says at sale time, calves weigh on average 750 pounds having been backgrounded 45 days. All calves are weaned and preconditioned.

Replacement heifers are important to King's program. He retains 30 to 40 a year and DNA-tests all commercial-herd females using GeneMax Advantage to help him choose the best for his goals. If they aren't in his calving window, he sells them as bred heifers. To date, King has built his commercial herd to 150 cows and the seedstock herd to 12 females.

Bull sales are important to the young operation, with King noting he's selling between 15 and 20 Brangus bulls each year private treaty. He's found some unique challenges to selling bulls in the seedstock arena.

"Everyone who comes to the farm to look at our bulls wants to know two things: They want to know what he weighed at birth and whether he is a calving-ease bull. The rest of the GE-EPDs (genetically enhanced expected progeny differences) some will want to know, and some will not. Every year, I spend money on GE-EPDs so we can show them to buyers and give them a pretty definite idea about what this bull or that bull can do for their herd, but I'd say 90% of buyers only want to know those two things. I am trying to impress on everyone that we have to take full advantage of the technology that's out there."

King's off-farm job is in real estate development, giving him know-how that's helped grow his operation. Much of the acreage he has converted to pasture has been in pine trees.

He winters the herd on native grasses and hay, keeping out mineral year-round. Rye is added for winter grazing. He plants summer forages like sorghum and sudan hybrid where he backgrounds calves. Any feed used is a soy hull pellet mix and dried distillers grains. Calves are marketed in August for shipment in September.

"Ultimately, we are working toward a rotational-grazing system, dividing our bigger pastures into paddocks. It's a work in progress," King says. His goal is an all-grazing operation where he can run a 250- to 300-head cow herd.

THE VALUE OF TIME

Along with land resources, King says time is a never-ending issue. "Just finding the time to do what needs to be done and the commitment to get out there and do it--that's what you deal with every day," he says.

He adds real estate development takes an incredible amount of time and makes for a tough balance with a cattle operation. He credits family, especially his dad, Kenny King, for stepping in and helping him get everything done.

"I'm fortunate to have my dad here on the farm to help when I need it. He makes sure the hay gets cut and the cattle get fed on time. We put up close to 1,000 rolls of hay a year. That alone is a big job."

"I've realized that for me, this is how I get away from the business world. I get a lot of enjoyment out of it," King says, smiling. "You have to love what you do. If you don't, you are just going to be miserable. I may be tired most days, but I'm definitely not regretting my decision to follow my heart back to the cattle business." 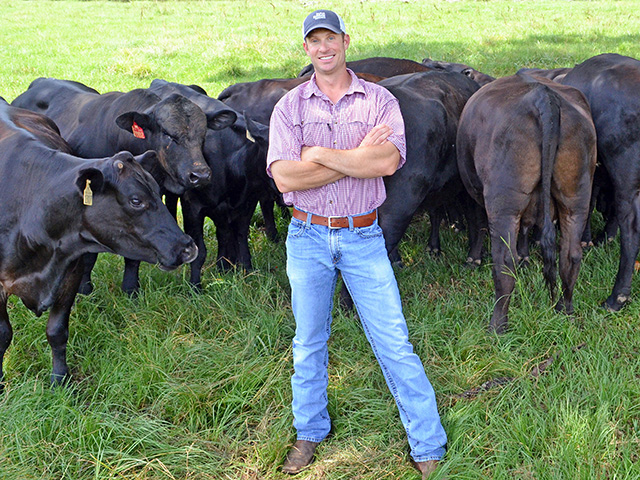