When you irrigate a farm over the Ogallala Aquifer, as the Makovicka family does, you are tapping a shrinking resource. The aquifer, which lies under 175,000 square miles across eight states of the Great Plains, has fallen about 16 feet on average in the last several decades, according to the U.S. Geological Survey (USGS). In some areas, it has fallen 100 feet or more.

The Ogallala has not shrunk that far in south-central Nebraska, where Ron Makovicka and his son, Brad, farm. But, they have watched it fluctuate and have taken steps to use every drop of its water wisely. “The more efficient you are, the less you deplete the water supply,” Ron says.

That’s why--along with their corn and soybeans--the Makovickas have planted soil-moisture sensors in their fields. They use the sensors to help decide the best times to irrigate. In combination with other technologies--including low-pressure nozzles and precision-farming techniques--the sensors help minimize waste and maximize efficiency.

Ron, 62, says the sensors have saved the family--and the aquifer--hundreds of thousands of gallons of water since they were installed in 2005 and have made the farm more profitable.

USGS measures the water level in thousands of wells that tap into the Ogallala Aquifer. Water tables vary year to year depending on precipitation and pumping. In Nebraska, for instance, between 2011 and 2013, the USGS says water levels dropped an average of 1.5 feet. If water levels drop too low in a district, the state can and will impose water restrictions on irrigators.

That is one reason a diverse group of stakeholders--university, government, industry and farmers--14 years ago founded the Nebraska Agricultural Water Management Network (NAWMN). Leading the movement was Suat Irmak, professor of biological systems engineering at the University of Nebraska.

Irmak suggests Nebraska farmers should use hard data for decision-making and adopt a whole series of irrigation technologies to save water, enhance profits and protect the environment.

NAWMN started as a demonstration project in 2005 with a few technologies and 15 farmer/cooperators. It has grown to a complex program that encompasses many disciplines.

“It is kind of a school where we talk about many different topics,” Irmak says. Network members discuss, among other things: water management, climate, nozzles, subsurface drip irrigation, cover crops, evapotranspiration and the relationships among crops, soil and water.

The “school” has become popular. “This is the largest water-management network in the nation,” Irmak boasts like a proud father. His brainchild now has 1,500 farmers/cooperators who irrigate about 2.9 million acres.

The Makovickas were in that first NAWMN class of 15. At the time, Ron and his brother Ray--who has since retired--ran the farm. Brad, 32, came back to the farm in 2015 after several years working with computers in the banking industry.

Joining NAWMN was a natural for the Makovickas, who have a family history of making the best use of water. When Ron was 8 years old, his father, Francis, moved the family from a dryland farm near Ulysses, Nebraska, to an irrigated farm near York. The family had some bad years when rains were scarce, and Francis wanted to farm where he had some control over how much moisture his crops got.

Flood irrigation was the dominant irrigation technology in the 1960s, but, it wasted a lot of water. What didn’t soak in ran off. Francis caught some of that water by building a catchment and pumping the recycled irrigation water to fields above the dam. “We could irrigate 29 acres with it,” Ron remembers.

When irrigation technology improved, so did the Makovickas’ strategies. Pivot irrigation is vastly more efficient than flood irrigation, and the family bought its first pivots in 1972. Today, they have about 740 acres under irrigation on which they grow yellow corn, seed corn, soybeans and milo for rotation. Their dryland corn averages 175 bushels per acre. Irrigated corn comes in at 260. Dryland beans produce 55 bushels, irrigated beans, 80 bushels.

The Makovickas use Watermark sensors. Each set of three sensors is attached to wires that descend to 1, 2, and 3 feet below the soil surface. The sensors read soil moisture at different levels and help the Makovickas decide when to throw the “on” switches for each of their nine pivots.

“It’s easy to save an inch or 2 of water” at the beginning of the season just by delaying startup of the rigs, Ron says. Without the sensors, he might be inclined to start the pivots when the surface of the soil looks dry. With the sensors, he can use real data to know when young crops are starting to get thirsty.

During the season, the sensors help prevent overwatering by indicating how much soil moisture he really has, Ron says. “Can you hold off [watering] until the next storm and when is that storm coming?” he asks.

Later in the summer, “You can be confident [by checking the sensors] that when you shut off, you should [have enough soil moisture to] be able to finish out the season,” he says. 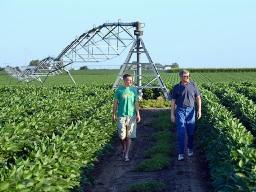