Methane digesters are the newest growth wave in renewable energy for agriculture.

The carrot and the stick are both at work here. As livestock operations work on ways to manage manure, there are environmental regulations and legal challenges to deal with. There are also state and federal grants, and energy credits available. Taken together, a big picture is emerging that has caused an uptick in methane digesters to produce renewable natural gas (RNG).

Calgren Renewable Fuels, an ethanol plant in Pixley, California, held a grand opening in October 2018 for a methane digester that will cluster livestock waste from 12 local dairies. Some of the RNG produced will be used to help power the ethanol plant, but most is expected to go into a pipeline for transportation fuel.

On the other side of the U.S., Smithfield Foods announced plans to build methane digesters across most of its operations over the next decade to produce RNG. This includes sites in Missouri, North Carolina and Utah. The company calls this its “manure-to-energy” project and says it will create RNG at more than 90% of its finishing-hog barns in those states.

Why all the interest? The most obvious answer is it solves a problem. Smithfield Foods, for example, is combating nuisance litigation in North Carolina about waste at a hog farm. In this case, there was a jury award of $473.5 million against the company, which the company is appealing. Hog operations in that state were also recently damaged when flooding from Hurricane Florence led to dozens of hog lagoons being compromised.

In California, dairy digester investments are being sparked partially by an impending rule calling on the state to reduce by 40% total emissions from dairies by 2025. At the same time, the state’s carbon standards are making it harder for nonrenewable natural gas to remain affordable. California is likely to phase out nonrenewable natural gas in the future to achieve those same greenhouse gas emission standards.

“To the degree you can get renewable gas into the pipeline, the utilities are all for it, because they see a hugely declining market for conventional natural gas going forward,” explains Michael Boccadoro, executive director of Dairy Cares, a California sustainability group for the industry. “So, they [utilities] are very supportive of it, almost too supportive, because they want to fill the pipeline with renewable natural gas.”

“The renewable natural gases are really expensive,” Boccadoro explains, noting a lot of dairies in the state rely on natural gas for energy.

CALIFORNIA INCENTIVES. Several incentives to offset the costs of digesters for livestock operations have been created in California. The California Department of Food and Agriculture awarded $69.9 million to finance 40 dairy digesters. At least 58 dairies are putting in digester projects, getting state grant funding and incentives from the public utilities commission to help offset interconnection costs with utilities, as well. These incentives can really add up--to $3 million for an individual dairy and $5 million for a cluster project. California could have well over 80 methane digesters on dairy operations within the next few years, Boccadoro predicts.

Along with state incentives, the EPA and California also started offering livestock projects renewable energy credits. EPA’s ruling that livestock waste can be converted into RNG scores livestock digesters as cellulosic, qualifying them for D-3 renewable identification number (RIN) credits. Cellulosic RINs are currently priced at $1.97 each, more than six times the value of a standard D-5 ethanol RIN. That creates a nice revenue stream for RN. If a natural gas plant has a seller or market in California, they can get a Low-Carbon Fuel Standard credit.

NATURAL GAS VS. ELECTRICITY. The EPA cellulosic RIN credits and California Low-Carbon Fuel Standard (LCFS) credits give digesters an option to generate RNG as an energy source rather than electricity.

“That started changing the economics for a lot of projects, making biogas for transportation fuel,” says Patrick Serfass, executive director of the American Biogas Council.

The key for livestock operations is finding a pathway to sell and deliver the natural gas to a vehicle in California to qualify for California LCFS credits.

Earlier this month, Renewable Dairy Fuels, a subsidiary of compressed natural gas company Amp Americas, opened the country’s largest RNG project from dairy waste in Jasper County, Indiana. It will take 945 tons of manure daily and convert it to biogas for transportation fuel. The digester is 50% bigger than the Amp Americas digester operation with Fair Oaks Farms, also in Indiana. Fair Oaks was the first dairy project certified for renewable fuel credits by EPA and the California Air Resources Board last year, and its carbon intensity score was the lowest ever issued by the air resources board, meaning its energy is cleaner than other fuels.

Smithfield told DTN editors it plans to market its RNG through California’s market where possible, so the company can claim both D-3 RIN credits and LCFS credits. Smithfield expects there will be other markets for its RNG, as well. Smithfield’s move comes with another bonus: praise from the Environmental Defense Fund for taking “a major step forward for the hog industry.”

WHY DIGESTERS WORK. The digester process takes a high-potency greenhouse gas, methane, and converts it into a lower-emissions RNG. Gasoline has a carbon intensity score of plus-98.47, while RNG from dairies scores a minus-255 under California’s LCFS.

Current demand for RNG in California, an EPA RIN value around $24 per MMBtu (1,000 cubic feet of Btu) and California credit for a dairy depending on the carbon-intensity score might generate total value for RNG between $42 and $70 per MMBtu.

Combined, the EPA and California credits generate roughly $95 per MMBtu. An MMBtu has the same energy content as roughly 9 gallons of gasoline or 11 gallons of corn ethanol, according to the Department of Energy. Credits now for RNG are significantly more attractive than the spot price for natural gas, which was $3.12 per MMBtu at press time.

A dairy digester can inject gas into a pipeline anywhere in the country as long as the company can diagram a line to California and contract with someone who sells natural gas in the state to the transportation industry.

“Then, you can create a RIN, and you can get the California Low-Carbon Fuel Standard,” explains Mark Stoermann, chief operating officer for the company Newtrient. “Then, you can get a tremendous price for your Btu.”

While this is great for new digesters coming online, most dairy digesters in the past have been built to produce electricity. Those digesters may have originally been under contract with electric companies to produce power, but electricity prices have fallen dramatically since many of those contracts were created. Some farms are looking to switch power production, but natural gas companies aren’t making interconnections easy.

“If you look at the science, there’s no issue actually with the gas quality,” Serfass says. “It’s just a fear of the unknown, which comes from a lack of education.”

Serfass says utilities in some states are looking to work with dairies, such as in Vermont, but that’s not necessarily the case everywhere.

OPTIONS TO HANDLE COMPOST. Livestock operations will be looking for more ways to convert leftover compost from digestion into a viable fertilizer byproduct. That will be a long-term key to the sustainability of digesters, explains Bruce Knight, a former USDA undersecretary of regulatory affairs and now a conservation consultant.

“If you had a digester and generated electricity, you have engaged in methane destruction for greenhouse gases, but you really haven’t done anything for the nitrogen and phosphorus footprint of a large, modern dairy,” Knight says.

Michigan State’s Kirk agrees that RNG production might be the incentive to create more digesters, but the long-term benefit may be a strategy for nutrient management that converts the phosphorus and nitrogen cycle from livestock back to crops.

“There are definite benefits to manure management and recycling the phosphorus and the nitrogen,” Kirk says. “We’re going to have more phosphorus and more nitrogen available to crops in the soil, allowing the plants to better suck up than in raw manure.” 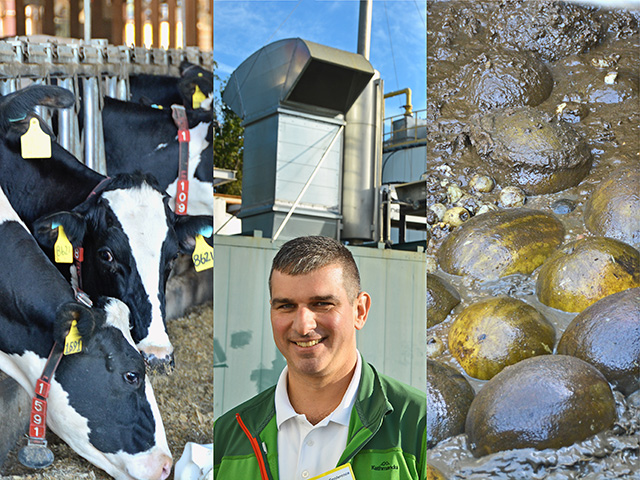