In describing how import tariffs on steel and aluminum will affect U.S. agricultural products, the president of a major farm machinery manufacturer says it leaves them “between a rock and hard place.”

Leif Magnusson, president of CLAAS Global Sales America Inc., says manufacturers’ input costs are going up as steel and aluminum imports have been hit with tariffs imposed by the Trump administration and China. U.S. metal producers have also raised their prices. At the same time, he notes, farmers are faced with declining prices because of lost exports under retaliatory tariffs.

“How can we go out in the market right now and ask for higher prices from the farmers when their income is going down?” Magnusson asks.

Despite finishing negotiations on the new North American Free Trade Agreement, now called the “United States-Mexico-Canada Agreement” (USMCA), the Trump administration had not eliminated tariffs on imported steel and aluminum from those countries at press time. Other major steel and aluminum exporters to the U.S. continued to face the same tariffs, as well.

Magnusson acknowledges most farmers are supportive of the Trump administration’s aggressive trade stance against other countries, particularly China, to reduce trade deficits long term. But, given the steady decline in farm income, he is concerned with how it affects large combine machinery sales.

“I don’t know how this October-to-December sales period will turn out in the end,” he says. “We will see, once the lower soybean prices start to hurt income, is that also going to reflect in holding off on a purchase?”

Because of Chinese tariffs, Glazer reports, Elliott lost an opportunity to work with a Chinese company that would have created a licensing agreement for them to sell equipment into that country. Once the tariffs were in place, the Chinese company backed out, he says.

Glazer is concerned about the tariffs becoming inflationary as costs are passed on to customers. He adds some industries and businesses get exempted from paying the tariffs for steel and aluminum imports. “It becomes picking winners and losers to some degree and contrary to our definition of what capitalism is,” he says.

Mark Zumdohme, president of Graepel North America Inc., runs a small manufacturer that makes corrugated aluminum products, including ladder rungs that go on CLAAS combines. He says they are challenged with having to pass on higher costs to buyers, which are mostly other manufacturers. He adds trade talks are going the right direction, especially with the completion of the USMCA. That agreement impacts some of Graepel’s products’ top export market areas.

Graepel, based in Germany, invested in the U.S. and built its operation in Omaha. Given the politics of trade, Zumdohme says, it is harder to now pitch investment in the U.S. “I think we need to get back to pro-free-trade policies,” he says.

INFRASTRUCTURE INVESTMENT. Magnusson says there also is a serious need for the U.S. to reinvest in overall infrastructure and points out the federal share of annual infrastructure spending has gone down in recent decades. He thinks an infrastructure program could get bipartisan support and would further stimulate the U.S. economy.

“If you poll farmers or any Americans, a majority of people in all sectors of life will all agree that infrastructure is good for the economy and the United States,” he says.

Investment in infrastructure in rural parts of the country is key to keeping the U.S. advantage in agricultural exports.

“For the farmers, water locks are very important for export, and the congestion today translates to tens of thousands of hours of waiting while barges get through the locks,” he says. “When it gets down to the ports, there are also some inefficiencies there.” 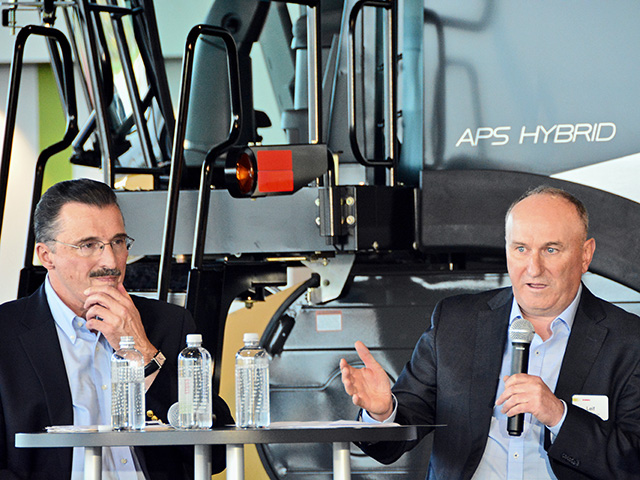