Matlock, a professor of biological and agricultural engineering at the University of Arkansas, was awarded the annual Communications Award from the Council for Agricultural Science and Technology (CAST) at the recent World Food Prize’s Borlaug Dialogue, in Des Moines.

Nobel Prize laureate Norman Borlaug was a wheat breeder and considered “the father of the Green Revolution.” Matlock says his message was tied to views expressed by Borlaug before he passed away in 2009.

“If we’re going to feed 10 billion people on this planet without destroying all other life, we’re going to have to strategically intensify agricultural production on the planet,” Matlock says, adding that the footprint of agriculture needs to be frozen rather than expanded.

Matlock, who also serves as executive director of the University of Arkansas Resiliency Center, notes those views are shared by global conservation groups such as the World Wildlife Fund, reflecting a coming together of some conservation and farm organizations.

CONSUMER EXPECTATIONS. In a panel discussion during the event, Matlock said consumers should not have to decide between “sustainable and unsustainable food.” Consumers have a standard expectation of safety and should have the same expectation for sustainability. Food production, because of farmer stewardship, may already meet sustainability goals, but that message might not be reaching consumers, he explains.

“What we have to do is tell that story better,” Matlock says. “We have a very good story to tell. We’re not done, but we have to tell it better because we’re not telling it well.”

Erin Fitzgerald, CEO of the U.S. Farmers and Ranchers Alliance, says consumer trust starts with stewardship. She notes every sector of the economy is trying to emphasize sustainability.

Jason Weller, senior director of sustainability for Land O’Lakes SUSTAIN, points to the explosion of consumer interest in topics about how food is grown tied to environmental and social issues.

“There’s a reason why a lot of these big multinational food companies and retailers are moving in the direction toward trying to communicate how sustainable their products or their storefronts are driving sustainability,” Weller says, adding the focus is not just in coastal states or on one demographic or generation. “Agriculture has a moment in time, as an industry, as a grower or as a cooperative system, a food company or an input company, to communicate how modern agriculture really is ensuring the integrity, not just the safety, the value of an item, but also the stewardship of the natural resources.”

The risk, Weller adds, is agriculture might not be engaged enough in efforts to define sustainability, leading critics of modern food production to create definitions, “and, it will be defined for all of us and in ways that are not necessarily advantageous to the farmer.”

Food companies like Pepperidge Farm are working with Land O’Lakes because they want to make sustainability claims about its Goldfish crackers. The company is sourcing wheat in the Chesapeake Bay area, tying it to efforts to reduce nutrient loads in the bay. This differentiates wheat but also highlights the relationship between the consumer and the farmer.

“That’s actually constructive of the notion that our food systems are sustainable,” Matlock says, adding, “I think that’s a very positive message.”

INNOVATION NEEDED. Fitzgerald says there are changemakers in other fields working on new technologies or space travel. She would like to see such an effort applied to agriculture and climate change.

“I would really like to encourage all of us to how we enable farmers to be the changemakers of the future,” Fitzgerald says.

Citing the growth in population, Matlock adds agriculture and society, as well, have to find ways to re-engage in developing trust that will ensure sustainable agriculture production as the population rises and the planet warms.

“Our challenges are urgent because our demographic changes are happening fast,” Matlock says.

In redesigning agriculture, he says the role of urban farming can’t be dismissed. Because of high land values, more agriculture will be grown in greenhouses and small acreages intensely growing vegetables.

Matlock acknowledges having a conversation around climate change isn’t easy, because most grassroots farm organizations are reluctant to broach the topic. He says such efforts must begin with common values rather than division and blame.

“You build on what we agree, not where we disagree,” Matlock says. “Every farmer out there knows their weather is changing. We’re facing record floods, record droughts, record heat and record cold--all in the last decade. This is part of their experience. They are not interested in casting blame; they are interested in understanding how they can respond. The problem we have with the climate change debate is about blame.”

NUTRITION IN FOCUS. The larger theme at the World Food Prize symposium was nutrition, especially drawing attention to the dangers of early childhood stunted growth, a condition directly linked to malnutrition. This year’s 2018 World Food Prize laureates Lawrence Haddad and David Nabarro spoke at a side event on science and storytelling. They note stunting has long-term economic impacts on nations, because stunting doesn’t just damage children physically but has lasting impacts on mental capabilities, as well.

“There’s a direct link between early childhood malnutrition and education,” Nabarro says. “Politicians are just starting to see that malnutrition is an issue that needs to be addressed for national development.”

The pair talked about work to influence policymakers to give a higher priority to nutrition in government and aid-relief budgets. “That’s what I’m trying to do is get nutrition on the public agenda,” says Nabarro, a former United Nations official.

Haddad, executive director of the Global Alliance for Improved Nutrition, says nutrition-related diseases such as diabetes plague the U.S. Healthier foods should be focused on adolescents who pick up eating habits they carry throughout their lives.

Haddad also says celebrity chefs have shown the ability to shift food consumption and demand, as well. And, he questioned the logic some argue of shifting to plant-based diets. That may be better for the environment, he says, “but on the health side, it seems much more complicated.” 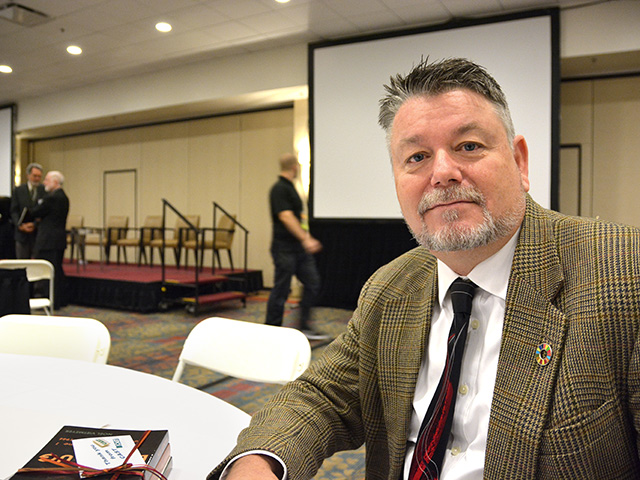