Marketings of fed cattle during November totaled 1.89 million head, 1% above 2021. Marketings were the highest for November since the series began in 1996.

"Friday's Cattle on Feed report unveiled exactly what was expected: fewer cattle on feed, lighter placements and stronger marketings. But the report does need some further explanation from there," said DTN Livestock Analyst ShayLe Stewart.

"Second, the placement data is supportive to the market in the sense that it's lower than a year ago, but it wasn't by as drastic an amount as some analysts thought. Before the report, analysts believed placements in November would range anywhere from 91.8% to 98.0% of a year ago, with an average guess of around 95.7%. Friday's report unveiled that placements totaled 1,925,000 head, which is 2% less than a year ago. Given that the pre-report consensus believed that placements would be fewer than what it was, the placement data is still supportive, but it's not as bullish in its nature as originally thought. What traders will do with the placement data of this report remains the wild card. If they opt to find it still supportive, then the feeder cattle market should have no problem trading higher. If they find it to be lukewarm in its support, feeders could still trade higher given that on-feed numbers are lower and that marketings were more aggressive than originally assumed. And let's not forget, with the weather conditions that the nation has faced throughout December, next month's report will likely show a bigger dip in placements.

"And, lastly, the marketing data of Friday's COF report was extremely supportive as, through the month of November, there were 1,891,000 head marketed -- which is the largest November marketing that the COF report has seen since it began in 1996. The market's most recent matter of concern has been whether or not current throughput speeds will be aggressive enough to allow feedlots to maintain currentness. And with seeing Friday's marketing data, I'm relieved to know that at least through December and well through January, showlists stand a fair shot at staying current given that they were so aggressively cleaned up earlier in the year.

"In conclusion, I find Friday's Cattle on Feed report to be supportive to the cattle market. The combination of fewer cattle on feed, slightly lighter placements and the most aggressive marketings that any November has seen since 1996 is no small feat." 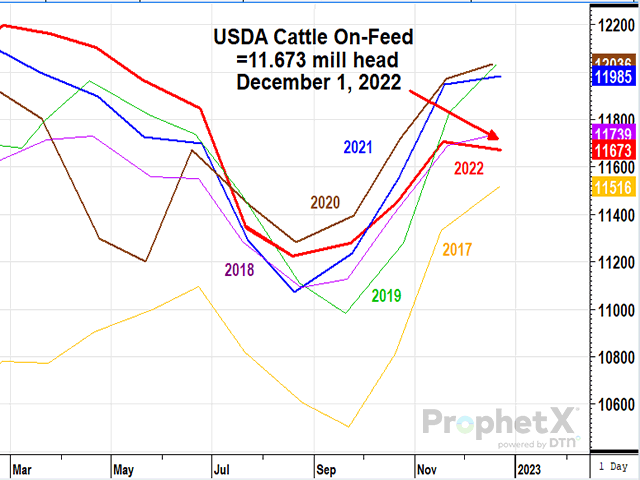