The average bull in a commercial beef herd stays around for four years and mates at least 100 cows. That makes him key to genetic direction of the herd, and his reproductive potential the true source of his value. All that potential can literally go cold in a perfect storm of freezing temperatures, lack of acclimation, and management missteps.

"Anytime there is a period of extreme temperature change, bulls can have a period of subfertility, especially if they lack good nutrition or protection from the environment," Lew Strickland, Extension veterinarian and associate professor of animal sciences at the University of Tennessee, said in an earlier interview with DTN on the subject.

While producers in Southern states rarely see temperatures cold enough to produce anything as extreme as frostbite on a bull's scrotum, Strickland stressed it's still important to be aware that excessive cold may affect the herd bull's ability to reproduce. He said it's important to go into the winter months with a strong body condition score (BCS) of around a 6, and to schedule bulls for breeding soundness exams (BSE) at least 60 days prior to the start of breeding season.

Strickland explained it takes a bull at least 60 days to make a new set of spermatozoa. Having a BSE at this point prior to breeding season gives him time to recover and to have a recheck. This will also give a producer time to find a replacement bull if necessary, without significantly affecting the breeding season.

ILLNESS CAUSED BY THE COLD

Strickland said fast-changing weather patterns, which are more common in the South, can lead to illness that will affect fertility. A bull with a fever or pneumonia may not recover sufficiently in time to breed by January, a month many in the Southern states start exposing cows to the herd bull.

"When we are going from 60 degrees Fahrenheit one day to 30 degrees F the next, a bull can develop pneumonia," he noted. "If he runs a temperature, that elevates body temperature, and that can interfere with spermatogenesis (sperm production and development)."

Once the animal's temperature gets to 102 F or above, stress also becomes an issue, and that may also have an impact on fertility. Given time, bulls are often able to produce and mature a new set of spermatozoa. But it's important to check and see if that has taken place prior to breeding season.

While producers in the South have to be aware of potential fertility loss during the winter, in the North, it's almost a given that a herd bull will experience some extremely cold temperatures, and as a result, will often need more attention to prevent long-term problems with fertility.

Greg Lardy, vice president for ag affairs at North Dakota State University, told DTN in an earlier article on the subject that one of the biggest challenges is keeping bulls out of the wind and avoiding frostbite, as well as the possibility of bulls becoming malnourished.

"Both cause serious problems with fertility," he said. "If a bull is extremely thin and malnourished, it affects sperm production and sperm maturity. Frostbite can do the same thing. Of the two, it's more common to see damage from frostbite."

This type of damage will often produce scabs on the lower part of the scrotum. Absence of scabbing, however, doesn't necessarily mean there was no frostbite. Lardy said they recommend a BSE 45 to 60 days after injury or before breeding season. The BSE will look at sperm motility, morphology, and population. He added it's important to wait 45 to 60 days after an injury to check because it takes that long for damage to be evident.

"Damage becomes clear as the sperm cell matures, and that takes a couple of months to see," he explained. "At the same time, we don't wait to take action with regards to treatment. If there's evidence of frostbite, bed the bull up properly and increase nutrition to try to help him overcome the harsh conditions and begin to recover." 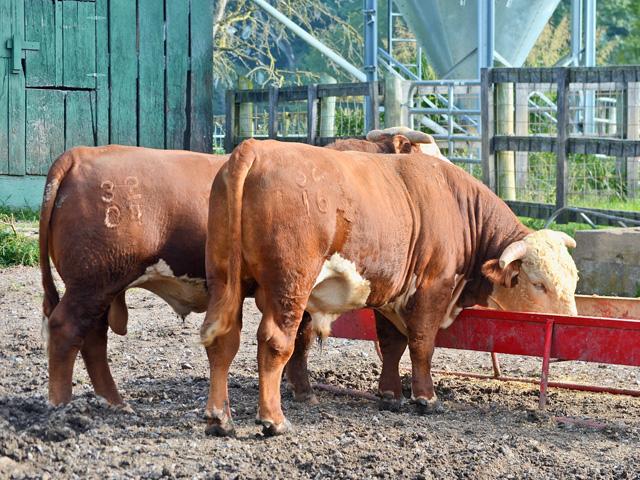