A marriage between Southern row-crop production and livestock grazing is being looked at as a great way to extend a whole host of economic benefits to both sides of the agriculture family.

Technically, an "integrated crop-livestock system," or ICLS, approach dates back generations. But today, researchers are increasingly finding the system's ability to boost soil health and manage production costs long term brings with it a lot of previously unmeasured advantages.

"The idea that you could marry two systems like cover crop production and grazing livestock and have economic benefits with this integrative approach is not something producers are widely incorporating in this region," says Josh Maples, Mississippi State University Extension agricultural economist. After two years of research, with more to come, he adds the numbers suggest ICLS is worth considering.

Costs for cover crop production ranged from $81.25 per acre (O), to $85.64 per acre (OC), to a high of $96.84 (OCR). Soybean production costs behind each cover were the same at $226.08 per acre. Since the goal of the study was to specifically compare the three different cover crop systems, costs that did not vary across those systems were not analyzed, but Maples notes those costs, which would include things like rent, fencing and water, would be important factors to look at for someone considering the system.

Revenue per acre for the cattle value of gain from the cover, was $399.73 (O), $411.72 (OC) and $340.28 (OCR). Soybean revenue was $637.12 per acre (O), $575.21 per acre (OC) and $482.83 per acre (OCR). Total revenue was the highest on the oats-only cover at $1,036.85 per acre. These are not profit estimates, stressed Maples, because a producer would need to consider all the costs on their individual operation. However, the revenue estimates do suggest there is likely room for profitability if a producer can manage costs. This will be an important area for future research work in the region.

Brett Rushing, MSU Extension researcher in plant and soil science, says today's ICLS is a form of sustainable production that relies on a "synergistic relationship" between plants and animals. He says surveys show these systems can improve soil structure, regulate disease and pests, cycle nutrients and sequester carbon. He notes that while many appreciate these benefits, there is a perception that cover cropping and no-till decrease crop yields and add in the cost of the cover crop, reducing overall revenue. That's where grazing those cool-season covers flips the picture.

Rushing points to research from Alabama where over 37 studies on stocker cattle have shown that five of the 10 cheapest costs of gains came from cool-season forage crops. He and Maples started their project in 2019 considering how those costs of gains might look in their state. Their work, which is expanding next year to other areas in the state, started at the Mississippi Agricultural and Forestry Experiment Station's Coastal Plain Branch at Newton.

These first two years of research essentially looked at planting cover crops post-row-crop harvest, grazing stocker-weight cattle on those covers, and then going back in the spring with a soybean crop. The study looked at three covers and/or mixes -- oats only, oats plus crimson clover, and oats plus crimson clover plus radishes. All three were planted in the fall, grazed late fall, winter and spring, and then desiccated prior to planting a no-till soybean crop.

Rushing said fields were divided into 2- and 5-acre paddocks. Cattle were five- and six-weight steers going onto the grazing. Total grazing averaged 45 to 60 days, depending on weather. Stocking rate was at about 2,000 pounds per acre. Grazing started once forage was at 10 to 12 inches, and they stayed on the cover until it was down to 4 inches. At that point, they were pulled off while the cover was stockpiled, fertilized and allowed to regrow.

"I've had some people ask what we did when we pulled them off of this grazing, and we kept them on stockpiled oats to maintain the same nutritional plane and gut bacteria," he said. "Once they were on the trial, they were there the entire cover grazing season."

Asked if he has seen any effect on the need for fertilizer in the following row crop, Rushing says they were measuring point-available nutrients and did not observe differences. But he adds they anticipate as the work progresses, they may see a reduced need for applied fertilizer.

"In soybeans, for example, our main goal is to maintain soil Ph and P and K. We are anticipating a rotation of corn and soybeans, which would involve applications of nitrogen, is where we'd see a difference. Especially with production costs being high right now, if we are able to reduce our nitrogen needs over time with this system, that would be important."

Rushing says that in the state where they have intensively managed row-cropping systems, they believe this approach could greatly reduce the need for trips across the field.

"We hope with these integrated crop-livestock systems, that through nutrient cycling of cattle, the cover crops, and the nutrient stratification from the covers, we'll see a positive impact on both grazing and on having live cover across these fields year-round."

Asked if this is going to be a money-saving option for many of the state's row-crop producers, Maples says there are several factors to consider.

If stockers are going on the areas planted to covers, the row-crop producer must consider some type of fencing. There is also the need for a water source in each paddock. The researchers envision a row-crop producer leasing out the grazing, allowing a stocker, for example, to potentially grow out more calves than they could on their own operation.

But Rushing doesn't want to limit thinking to stockers. He points out that for the typical cow-calf producer, this may also be a viable way to carry cows over the winter with a minimal amount of hay or supplemental feed.

Rushing adds that many Southern producers operate diversified operations with both row crops and cattle. By integrating those onto a single land base, there is the potential to offset the costs of cover crop establishment through the generation of revenue from livestock weight gain and savings from winter feeding. 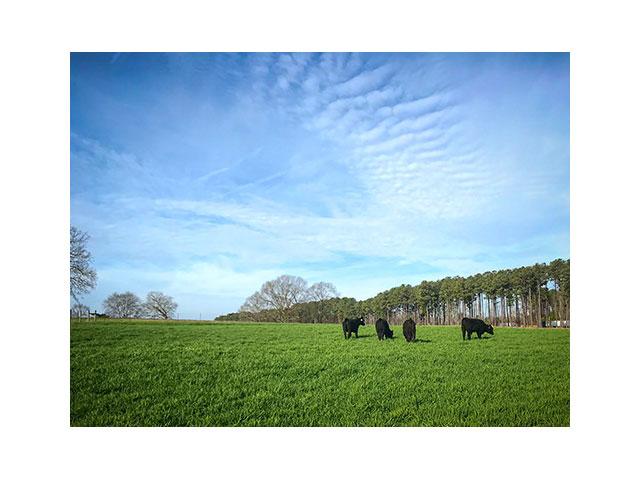