"He was the only dog that did the big swim. I can see it like it was yesterday," says Kaye Fuller.

It was one of Kaye's proudest moments, watching her golden retriever, Flash, compete at the top of his game. It was the open stake at the 2013 Fort Collins Retriever Club Trial. Flash's professional handler, the late Bill Eckett, turned that memorable day into a win, earning Flash his Field Champion (FC) title and qualifying him for the National Retriever Championship.

It was a big day for everyone, but especially for golden enthusiasts. Flash, full name "Topbrass No Time To Paws," was making a name for himself doing something more expected out of a Labrador than a golden.

"When word got out that a golden was making the swim, a crowd gathered," says pro trainer Kirk Major, recalling Flash's near-1,200-yard swim that day over three consecutive retrieves. It's a big deal when any retriever wins an open and earns their FC, but when it is a golden rather than a Labrador, it is truly a special occasion.

It says a lot about Flash's training, but also about his genetics. The Fullers know all about picking the keepers when it comes to genetics in good dogs, and as it turns out, in cattle as well.

Kaye and her husband, Roger Fuller, took their knowledge of genetics in goldens in another direction in 1985, when they bought a ranch in Austin, Texas, today known as "KC Beefmasters." The previous owner had 200 head of quality Beefmasters, a cross between Herefords, Brahman and Shorthorns. But that wasn't what the Fullers walked into when they bought the ranch.

Kaye recalls, "He sold all but the ugliest 12 and left them on the ranch." She and Roger did their research on the breed, and they decided to stay with it. They used artificial insemination (AI), which Roger added to his skill set, and embryo transfer to upgrade the herd.

"Beefmasters make sense genetically and environmentally in central Texas," says Roger, adding that not only are they heat-tolerant, but they are gentle. That docile temperament is a necessity today, as he and Kaye are in their 70s and do almost all their own cattle work. Kaye adds she likes that the breed coexists well with the dogs.

And the dogs, all goldens, continue to be a key part of this couple's day-to-day joy. They were even what brought the two together many years ago.

Kaye Fuller, a veterinarian in Austin, was working with a company that helped transport dogs when she met Roger in 1985. He worked for IBM and was moving to Texas from Germany. While his dogs were in a required quarantine period at Kaye's office, she got to know Roger.

"He would come by on his lunch hour every day and love on them," Kaye recalls. "I decided he was a pretty good fella."

In 1989, after he proved he could throw and shoot a live pigeon for the dogs, Kay agreed to marry him. At the time, each had four goldens, so their wedding photos include eight goldens, all in a line.

Roger competed in obedience trials, but Kaye says she drug him into field work. He proved to be an apt study, earning an AFC title on his dog KC's Chip Off The Old Block. Chip passed away in the 1990s; Flash, this past January. But the Fuller's household still has plenty of golden family, including Wager, who isn't quite a year old; Marty, 3; Rider, 3; Auggie, 7; and Jessie, 8. Roger says Kaye's Jessie and his Auggie are both close to their AFC titles.

As for the future for the herd, they've cut back to 37 mama cows, which Kaye says is the number, along with their calves, they can work in one day. They've also continued to improve genetic quality.

A GOOD EYE AND GENETICS

While at first glance, Beefmaster cattle and Golden retrievers don't seem to have much in common, Roger says the study of genetics applies in both cases, as you work through what traits to avoid and what to encourage.

With the cattle, the breed association makes it a bit less challenging by providing expected progeny differences (EPDs) and indexes. The Fullers emphasize rib eye area and intramuscular fat. Structure is another critical point. Roger says they want to see spring of rib and a straight top line.

And just like with the cattle, a good golden puppy is all about genetics and an experienced eye. The Fullers rely on pedigrees and observation.

"We're going to make sure we've seen the sire and dam work," says Roger. "If we haven't, we have friends we can call and ask. We have a tremendous network around the U.S."

Kaye adds that structurally, they want a pleasing head, moderate size and a good shoulder.

"They have a hard life running and swimming. It helps extend their working careers if they have good structure," she explains. The also make sure the puppy's health clearances are in order, including those on hips, elbows, eyes and heart, as well as being free of inherited diseases that tests have identified.

Then, of course, there is temperament. One of the main reasons the Fullers chose Beefmaster cattle is their docility. With puppies, Roger says, "How biddable are they? I want them to interact with me."

Kaye adds, "Goldens want to work for you. You're a team."

It's a winning team the Fullers hope will earn them a few more titles in the years to come.

"When Flash started winning, our goals went up and we set our standards high," says Kaye. "We still very much enjoy the process. It is great to see these dogs do what they are hard-wired to do."

Flash set that bar mighty high. By the end of his competitive career, he had not only the FC title from 2013, but a win in an amateur stake in 2014, and his Amateur Field Champion title in 2015. He even went to the big show -- the 2015 National Amateur Retriever Championship in Ronan, Montana. In that event, dogs were tested over 10 grueling series.

"He went series after series and was named a finalist," says Kaye, with a smile. "He was the only golden to finish in the last 20 years." 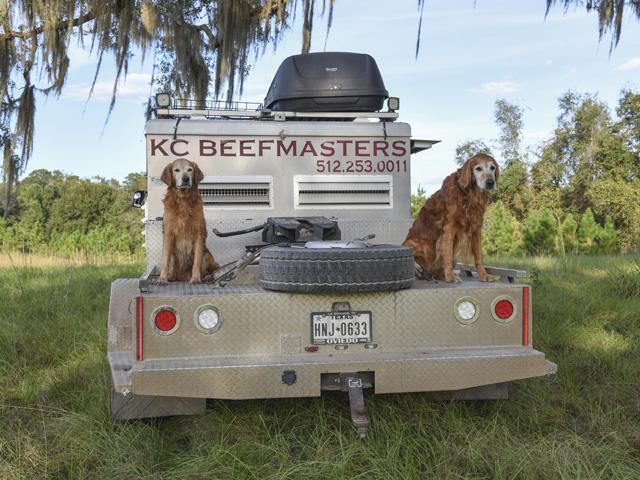