It was only first officially identified in 2017, but the Asian longhorned tick has since been confirmed in 17 states across the U.S., according to the latest report from the CDC. This is of special concern to cattle producers because the tick carries a disease commonly called "Ikeda" that can be fatal.

According to the CDC, the tick has been found in the following states: Arkansas, Connecticut, Delaware, Georgia, Kentucky, Maryland, Missouri, New Jersey, New York, North Carolina, Ohio, Pennsylvania, Rhode Island, South Carolina, Tennessee, Virginia and West Virginia. The CDC asked that those finding these ticks save the removed pests in rubbing alcohol in a jar or a Ziplock back and contact their state agriculture department or local Extension office. The ticks have been found on pets, livestock, wildlife and people.

Elanco Animal Health veterinarian and senior technical consultant Thach Winslow wrote in a recent report that Ikeda (Theileria orientalis) is a protozoal disease that attacks red blood cells. To date, he noted, there is no approved treatment for the disease in cattle; nor is there an effective vaccine. Producers in Australia and New Zealand have been fighting Ikeda for at least two decades.

Winslow explained that Ikeda is primarily transmitted through the saliva of feeding ticks, but blood transferred through shared needles or other devices can also spread the disease. Incubation period is one to three weeks, with 80% of a herd infected within just 30 days. Death loss, however, is below 5%, reported the consultant.

Winslow noted that Asian longhorned ticks are small, like a deer tick, which makes them hard to spot on cattle. They tend to be found on the head, ears, under the tail, axilla and flanks. The tick can survive off the animal for up to six months. It is tolerant to cold, but does not survive well in hot, dry climates. Cattle are the predominant host species, and once infected, are lifelong carriers of Ikeda.

Winslow wrote that once found, it is nearly impossible to eradicate Ikeda. He said producers need to focus on biosecurity and tick control measures, adding there is a blood test for Theileria orientalis.

"A tick control program consists of two target control points, the environment and the animal," Winslow said. "Environmental control is challenging and consists of brush and vegetation management through limiting access and controlled burning. Producers should consider cutting down pastures, trimming brush and fencing off heavily wooded areas. In some cases, spot spraying can be implemented.

"On-animal treatment is often the most practical and effective," he added. "Total wet down with high-pressure spraying, spray boxes or dipping vats are preferred but require facilities and equipment specific for implementation. Back rubbers and oilers are more convenient and are most effective with forced daily usage by setting them up across access points to water or mineral. Insecticide ear tags will help control ticks in the ears and around the head but will have minimal impact on the rest of the body compared to other methods."

Lastly, Winslow noted that if injectable or pour-on macrocyclic lactone dewormers are used to treat cattle for internal parasites, there can be the added benefit of some tick control. But he cautioned against their overuse and said they should not be used solely for tick control. 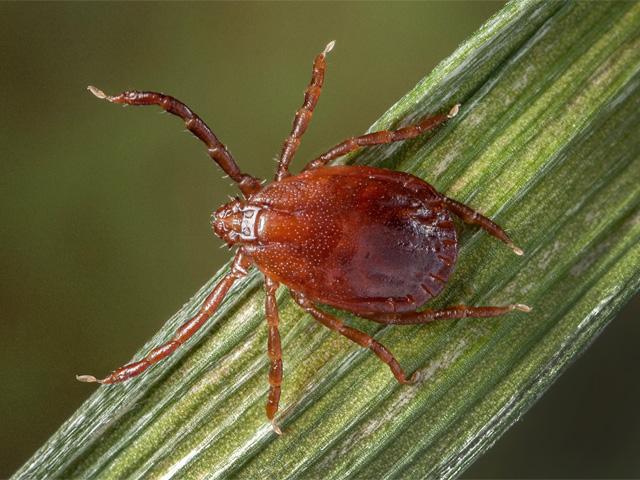