Producers who have culled down the cow herd may have a window this year to reevaluate pastures and consider replacing endophyte-infected fescues once and for all.

Joe Horner, an agricultural economist with the University of Missouri Extension, told DTN that the cattle industry is at a point in its 10-year cycle where inventory is low and there may be opportunities to take some paddocks and fields out of rotation for a season. That might make it the perfect time for a "spray and smother" on old fescue.

Replacing toxic fescue is a subject Horner said he's asked about often. He noted that whether the shift will pay off often comes down to a question of degree.

Horner added that pastures with 60% or greater endophyte infection are considered highly toxic.

Fescue toxicosis can be a serious profit robber for beef producers. It lowers reproduction rates, milk production, gain and weaning weights. It can also lead to lameness and heat stress. Some studies even show that it may increase water usage by the herd 25%.

Craig Roberts, University of Missouri Extension agronomist and researcher in forage crops, told DTN that in times of heat stress, toxic fescue exacerbates the need for water, but there isn't enough data to know exactly how much of an increase there is.

For producers seeing negative health effects in the herd, Roberts advised collecting fescue samples and having them lab tested for endophyte infection levels. He added it's important to use a lab familiar with the issue, such as Georgia's Agrinostics Ltd.

If removal and replacement of toxic fescue is deemed the best option, producers may want to consider a shift to novel fescue varieties that are nontoxic, native warm-season grasses, or perennial cool-season grasses as replacements. The renovation process often starts late spring or early summer, and Horner said they recommend using some variation of a "spray-smother" process.

First, spray the fescue with a herbicide; then, plant a smother crop like Sudan grass or pearl millet in the summer, or even the winter. After this crop matures, it can be cut as hay or grazed.

Horner added producers can skip the smother crop if they want to spray twice with a herbicide, observing a waiting period between applications. But he said the summer smother crop will typically lead to a faster payback. Producers should apply another round of herbicide before seeding a replacement forage. The whole process takes about one year.

"It's not a simple and easy process, but real opportunities exist," Horner said. "If producers are willing to put in time and make major changes, it's a good long-term investment."

For more tips on renovation, go to the website for the Alliance for Grassland Renewal at www.grasslandrenewal.org.

There are other ways to mitigate the downside of endophyte-infected fescue pastures. Think dilution, herbicides, and seedhead suppression.

The endophyte infects plants initially at the base of the leaf, moves into stems, and then into developing seedheads and seeds. Producers can time grazing of endophyte-infected fescue pastures to avoid the reproductive stage of development. Also, clipping fescue prior to the formation of seedheads helps reduce the effect.

Be mindful that heat has been shown to intensify the toxic effects of the endophyte, so it helps to plan for alternative grazing at peak times of the summer.

Dilution of the negative effects of infected fescue is possible through the introduction of other forages, such as legumes and white clover. By diversifying the forage environment, the amount of endophyte consumed is reduced.

It is also possible to suppress fescue seedhead formation using the herbicide Chaparral. This has the added benefit of controlling broadleaf weeds. It can stunt fescue, causing it to yellow for a short period of time, but the tradeoff has been shown to be higher weaning weights.

"We've seen success with these methods," Horner told DTN, adding they've largely been the traditional strategies for some 25 years.

"But our dairy grazers have shown us that biting the bullet one time and re-grassing pays dividends for years thereafter," he added. "The return on this is better than the return we see on a lot of other things, like machinery." 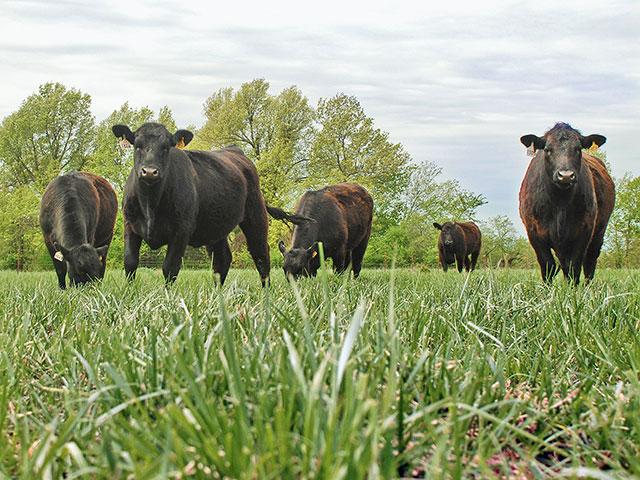