With a replacement heifer enterprise, a frozen locker business, two cow herds and a couple of loads of stockers at times, Phillip Crawford knows how to keep a close eye on ration costs. And it sure hasn't been easy lately.

Silage has become the base for the most-fed ration on the operation today. With corn hominy and whole cottonseed added, as well as a mineral pack, the mix was running around $130 a ton at publication time.

A byproduct of the dry corn milling process, hominy is high fat (5% to 8%), high protein (11.5%) and high energy (90%). Whole cottonseed is another superfeed with 18% fat, 28% crude protein and 90% TDN. The Crawfords estimate they save around $50 a ton on this quality byproduct because they raise cotton and get their own seed back from the gin. That means they don't have to buy it on the open market. The remaining ingredient they rely on is dried distillers grains, which also get high marks for quality at 18% fat, 28% crude protein and 90% TDN.

The operation does buy cracked corn for the same price or cheaper than they can grow, store and process it themselves. It makes up one-third of the ration for the 25 head or so of freezer-locker cattle they finish yearly. Altogether, this ration is their priciest at $300 a ton.

Another money-saving tip Sell recommends is testing hay before trying to formulate a ration. "If it is 11% to 12% crude protein, and 58% to 60% TDN, an 1,100-pound lactating cow can make do on that. There are producers who have that quality of hay."

"We've heard from people all over the country wanting us to add custom ingredients. One fella had scraps of legal marijuana. He had a nutrient analysis on it, so it would balance it for him," Sell says with a laugh.

The Clemson University Feed Calculator can be found at: https://precisionag.sites.clemson.edu/…. 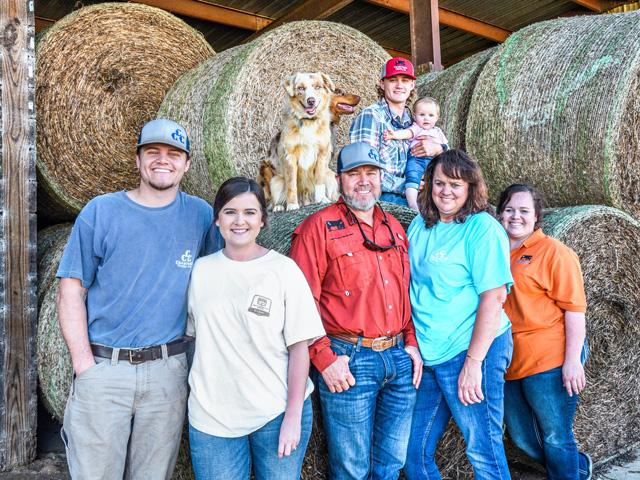