STEAMBOAT SPRINGS, Colo. (DTN) -- It was too late to escape, so Jim Rathbun, 84 years old, didn't run from the fire. He hid from it.

There was no escape, so he flung himself to the dirt and crawled beneath an old broken-down feed truck parked in the farmyard. He let Duke free to run for fresh air, then curled up under the rear end, and from there, he looked out as hell swept across the northern Kansas prairie, taking with it everything the family had worked decades to build.

The destruction of the Rathbun ranch was only a small sliver of the devastation wrought on Dec. 15 by a wild and unprecedented storm system that roared across the Midwest, "a serial derecho," according to the National Weather Service, the only derecho on record to have ever struck the United States in December.

The system's fierce winds in many places produced images more akin to 1930 than 2021, towers of black dust being pushed by raging wind. The storm, combined with unseasonably warm and dry weather in the weeks leading up to it, turned into a disaster in north-central Kansas, where it was likely snapped powerlines or dry lightning that sparked wildfires, largely uncontrollable in the conditions.

Fueled by gusts that roared to nearly 100 miles per hour -- Category 2 hurricane winds -- half a dozen fires devastated more than 400,000 acres, killing two people, destroying cattle herds, eviscerating ranches, burning more than a dozen homes and delivering a crippling punch to a ranching region in the heart of the country.

"Derechos don't happen in December, and when they do, they happen on the Gulf Coast, if anything," said DTN Ag Meteorologist John Baranick. "The conditions you need to get a derecho are hard to come by anyway. The easiest way is to get a lot of heat and a lot of moisture, and you just don't get that in one of the coldest months of the year."

The massive wind caused damage across the Midwest and fires sparked throughout the region, as well. Much of the worst fire damage was confined to four Kansas counties -- Russell, Osborne, Rooks and Ellis -- an event dubbed the Four County Fire.

"That day, Dec. 15, I'll remember it the rest of my career," Baranick said. "It was one of the most bizarre weather events I've ever seen."

"Toughest day of my life," said Morrill, who runs cattle near Paradise, Kansas, about 10 miles southwest of where Jim Rathbun took shelter under his old truck.

Morrills have ranched in the area for more than 100 years, but their land hasn't in that span seen anything like what it endured last week.

Fire's always a concern in dry months, especially when backed by the howling Kansas wind.

"A grass fire with a 20- or 30-mile-per-hour wind may be a problem, but you can get it stamped out," Morrill said. "With this, there was nothing anyone could do other than get out of the way and let it burn. A fire truck was pretty useless in that wind."

Still, when Morrill first heard the report of fire and saw the wind switch, he had to try to move his cattle.

He tore down the gravel road toward his ranch in his Dodge pickup until the fire was blown over the road and the heat and smoke were too intense.

He turned around, but the fire had crossed the road behind him, as well. Fire closed other roads and still more were made impassable by downed powerlines.

He'd got within a mile and a half of his herd.

"There was fire everywhere," he said. "I barely got out."

There was nothing that could be done for the cattle. The fire ripped through the grass. Cows tried to shelter in a draw. Not even half survived.

He'd first tried to fight his way through the fire at about 3 p.m. He finally made it at 9 p.m.

An exact count of cattle killed by the fires is still a long way off, but the Kansas Livestock Association estimates at least hundreds, if not more than a thousand.

That much was clear the night of Dec. 15 and even more evident the next morning as the fires still lingered as smoke clung to the landscape.

In many places, there was nothing left.

"It's just dirt now," Morrill said. "That's it. Just dirt. We'll probably be feeding cattle until at least June or July, depending on how much moisture we get."

Help has started to trickle in, but much of it must come from afar. Disaster victims in such tight-knit communities typically lean on neighbors, but this time, the neighbors suffered the same catastrophe.

There's been some hay from other parts of the state, and some supplies. Some have been able to start sending surviving cattle to friends and acquaintances in other regions, or sometimes even to strangers.

"It really restores your belief in people, that there are a lot of good people out there still," Morrill said.

The Kansas Livestock Association began seeking donations right away, and help started arriving before all the fires were even out, lots of hay, but also fence posts and other equipment.

The organization has turned on its fundraising arm before to deal with fires, in 2016 and 2017, and pledges 100% of all donations will go to producers to help in rebuilding. Monetary donations can be made online at https://www.kla.org/….

Several collection sites are set up throughout the region, as well, and many of the affected ranchers and farmers, including the Morrills, have GoFundMe pages established to help their operations survive.

"The ag community is so good about taking care of its own. Many people jumped into action, and donations started rolling almost immediately," said Scarlett Hagins, vice president of communications for the association.

It's all plenty welcome to Morrill, who said he and his wife, Kristi, hate to ask for help, but see no other option in this situation.

Still, it can all only do so much.

"You realize you had a lot of stuff you can't replace, windbreaks, or even the genetics in the cattle," Morrill said. "Those kinds of things take years and years to build, and they're just gone, and you have to start over from scratch."

The broken-down feed truck in the yard at the Rathbun ranch came out singed by fire, but not completely burned, and after watching his world turn to ash, Jim Rathbun crawled from beneath it, unharmed.

"I'm not joking, it was by God's hand," said his son, Jason Rathbun.

A grandson soon arrived to help, and Jason wasn't far behind. He'd been working as a volunteer firefighter when word reached him fire had been seen at his dad's house, at the heart of the 150-head ranch Jason runs.

By the time Jason arrived, the house was gone along with miles of fence. Vehicles, barns, hay and tools were no more. Scores of cattle lay dying, half the herd.

"You can't even imagine that you work your entire life ... all your goals as a rancher are to keep those animals alive, and then you pop over the hill and see ..." Jason paused, as he spoke about the disaster nearly a week later. He cleared his throat but paused again.

An unfathomable amount of work lies ahead for the region.

There are hundreds of miles of fencing that needs replaced, in addition to all the facilities required for a modern ranch. Insurance and government may help with some, but likely not all.

"You pop over the hill and see a bunch of cows laying there in piles, dead. It's incomprehensible to most people," he said. "Rubble. Dead cows. Barren land. A lifetime of work, gone."

There have been glimmers of positivity. Duke, the only thing Jim Rathbun brought in his desperate flight from the house, found his way to safety and, two days later, to a neighbor's house. There's a newfound appreciation for the life and health of loved ones, and for a looming Christmas holiday that will be like none before.

Still, there's one thing the people of the Four County Fire are asking for above all else.

"Prayers," Jason said. "We need a lot of prayers." 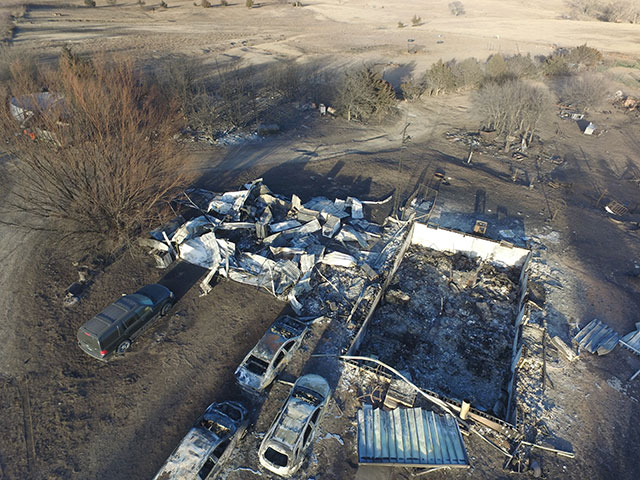