The Beef Quality Assurance (BQA) program continues to set U.S. producers apart from their global competitors, and it all starts at that boots-on-the-ground level where producers like Guillermo Pineda work every day.

The son of a native Venezuelan, Pineda says he and his dad started their South Carolina cattle business in 2012. The elder Pineda was accustomed to vaccinating cattle every three months because of disease threats in that tropical environment. That was his mindset when the agricultural engineer made designing and building safe and efficient working facilities, and implementing a herd health program, a priority for the new operation.

Today, the Pineda family run a 150-head commercial cow herd in Saluda at Westlake Farms. Along with the efficient working facilities, they made the BQA standard a priority from day one. Guillermo says it took a while, but he finally convinced his father that in the U.S., twice-yearly vaccinations were enough, but that was about the only concession his father ever made when it came to the cowherd. And his emphasis not just on vaccinations but on using them correctly remains the standard here.

"Proper vaccine administration is critical, both for the animal to be able to develop immunity and to prevent unnecessary local complications like abscesses. Prevention is key," says Guillermo, a cardiologist.

He gets no argument from his wife, Jackie, an internist.

"We are very particular. When we work cattle, it is a family day," she says. "Guillermo insists on doing the vaccinations himself, I keep notes, and our sons, Daniel and Andres, move the animals into the chute."

To make sure workdays are as stress-free as possible for both cattle and humans, the family focus on low-stress handling techniques, and they cull females that aren't docile.

"We try to make sure we catch the small things before they get big," she notes, adding that even with their medical training, they don't take anything for granted. "If it is something minor, we'll treat it ourselves, but otherwise, we call Dr. Riley, our veterinarian. We don't play with it."

Even for producers like the Pinedas, who stay on top of herd health, it's important to be current on BQA certifications, says former Montana State University Extension beef specialist Carla Dean Sanford.

"BQA continues to evolve and improve," she says, noting that as an example, North Carolina State University and Ohio State University researchers did a trial on prostaglandin injections given during estrus synchronization. They reported there were no advantages as far as conception rates when these injections were given in the rump rather than the neck. The same standard for injections, in the triangle area of the neck rather than the rump, is one of the basic tenets of BQA and serves to eliminate injection-site lesions in the high-value cuts of the loin and rump.

Sanford adds, "Always opt to give an injection subcutaneously, rather than intramuscularly, if you're given the option on product label guidelines." She adds that research continues to develop pharmaceuticals that can be administered topically or intranasally, rather than injected.

Today, Sanford's role puts her in a good place to see the BQA value from a different side of the market. She is now Southeast regional customer verification specialist for IMI Global, a division of Where Food Comes From, where she performs third-party verifications for value-added programs. And she still works on her family's cow-calf operation, allowing her to emphasize BQA standards at work and in her home herd.

The sixth-generation producer says it's clear in today's market that premiums can be captured by producers who are BQA certified.

"There was a Colorado State University study done in 2019, with data from 2010 to 2017," she says. "With video lots of steers and heifers sold in nine Western states, there was a $16-a-head premium on calves coming from BQA-certified operations. Let the auction house or video company know you're BQA certified."

Sanford says IMI Global understands the value of BQA, which is why it is a critical component of their CARE-certified standard for beef producers at the cow-calf and backgrounder levels. CARE is their animal care, environmental stewardship, and people and community support program.

The Pinedas don't participate in CARE, but they've used their BQA training as a springboard to certify their feeder steers and heifers as Non-Hormone Treated Cattle (NHTC) and Global Animal Partnership (GAP) cattle. As a result, they're able to market with other area producers with the same certifications and similar cattle through Mid-Atlantic Cattle Sales, and typically see premiums of $15 to $20 a hundredweight (cwt).

"If you're already doing the right things, it really isn't harder," says Jackie.

Sanford agrees, adding that "being BQA-certified shows consumers and other producers we're better than just good enough. It not only ensures we meet the standard, but that we're not doing anything that could negatively impact the animal and its carcass." 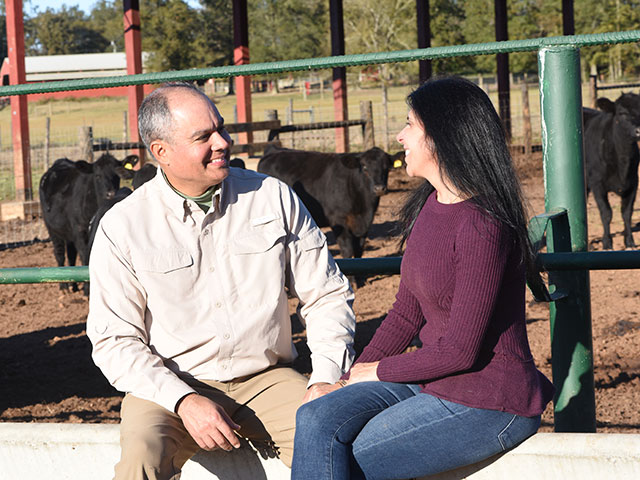