LINCOLN, Neb. (DTN) -- If the U.S. cattle industry is to make a serious effort in reducing methane emissions, then scientists need to correctly account for the nature of methane itself, a scientist at the University of California-Davis said during a lecture at the University of Nebraska-Lincoln this week.

Frank Mitloehner, professor and air quality specialist in the department of animal science at UC Davis, said the current official accounting of methane and its effect on climate was inaccurate.

"So, methane has a short lifespan because there's something in the air that destroys it," he said during a keynote address this week as part of UNL's Heuermann Lecture series at the Institute for Agriculture and Natural Resources.

"And this process, the destruction of methane, is currently not considered in public policy in regulations and so forth. The world thinks that methane is just like CO2 or nitrous oxide, a gas that's produced, and it's not the end of the story. While CO2 has a lifespan of 1,000 years once you burn fossil fuel, that CO2 is in the air for 1,000 years. But methane is not. Methane is in the air for a little over a decade, and then it's gone."

According to the EPA, however, methane is about 25 times more potent than CO2 at trapping heat in the atmosphere.

Mitloehner said he's concerned the general public and government policymakers are misunderstanding the role of methane from cattle in the overall emissions-reduction picture.

The U.S. as a whole, however, is second only to China in overall emissions. According to the Union of Concerned Scientists, China accounts for 28% of overall emissions and the U.S. at 15%. So, methane reductions achieved by the U.S. cattle industry could have some effect in reducing overall global methane emissions.

"We need to acknowledge what the contribution is, set goals, and say in the future we want to reach further reductions and here's how we want to do that," he said. "But let's not bark up the wrong tree with respect to major emitters in the country, all throughout the world."

Mitloehner said researchers at the University of Oxford as well as the Intergovernmental Panel on Climate Change have found the atmospheric removal of methane is not being accounted for in emissions calculations.

"This statement was just quoted by the Intergovernmental Panel on Climate Change, IPCC, in their most recent report three weeks ago," he said.

"And that report said the same thing that constant sources, characterized by the old matrix, will be exaggerated by a factor of three to four."

Mitloehner said methane emissions from cattle herds are at consistent levels over time so long as herds are not expanded.

For example, he said if a rancher maintains a 100-head cattle herd for decades and hasn't expanded the operation, the amount of methane emitted would be roughly the same every year.

"After the first decade, the amount of methane produced and the amount of methane destroyed were in balance. A constant cattle herd does not add new and additional warming to our planet, and that's good news. How you quantify emissions, it has been done significantly wrong. It needs to be changed.

"Because only if we do the math right, we can arrive at effective mitigation. I don't want you to go, go home and say, 'Frank said that cows are cooling the planet.' That's not what I'm saying. But what I am saying is, if we reduce methane, then we reduce warming."

Galen Erickson, Nebraska cattle industry professor of animal science at UNL, said his research focus is on how to reduce enteric methane emissions.

In ruminants, methane is produced primarily by enteric fermentation where microbes decompose and ferment plant materials such as celluloses, fiber, starches and sugars in their digestive tract.

He said his research is looking at feed additives, management and other ways to change or modify how much methane is naturally produced by cattle.

"I would point out it's going to be difficult to eliminate methane generation from cattle," he said during a panel discussion following the keynote address.

"It's a natural process. It serves a role in the rumen, and by the way, those rumens are really what allowed cattle to convert cellulose, the most common biomass on the face of the planet, into steaks with a little help from feedlots. So, I think the methane generation, ways to mitigate it, understand what factors influence it, that's an area we're interested in."

Mitloehner said there is economic opportunity for producers in reducing methane emissions. In California, for example, the state has created an incentives-based program to encourage farmers to reduce methane emissions. California mandates a 40% reduction of methane in the next 10 years.

The state is using a "carrot approach," he said, by financially incentivizing methane reduction through capital investments. The state invested about $500 million and partnered with the dairy industry to implement technology to reduce those emissions.

"We have 1,300 dairies in the state," Mitloehner said. "A very significant proportion of U.S. dairy comes from California."

Many California dairies are trapping methane and using the biogas to produce renewable natural gas.

"If you convert biogas to RNG, you get paid," he said.

The state's low-carbon fuel standard pays about $200 per ton of CO2 captured.

"There are dairyman telling me 'I make more money from my carbon credits today than from my milk check,'" Mitloehner said.

"So, this whole issue of methane mitigation can really become even financially interesting to producers. Our dairy industry alone over the last three years has reduced methane by 25%. That amounts to 2.2 million metric tons. And that's what it is -- 25%; the overall state goal is 40%. I think not just the dairy industry can do it, the beef industry can do it, and everybody in animal agriculture can."

Colin Woodall, CEO of the National Cattlemen's Beef Association, said his group has set a goal of achieving climate neutrality by 2040.

"I think a lot of us, when we started talking about sustainability, felt that this was just going to be a fad, the topic of the decade, and then we wouldn't have to worry about it," he said. 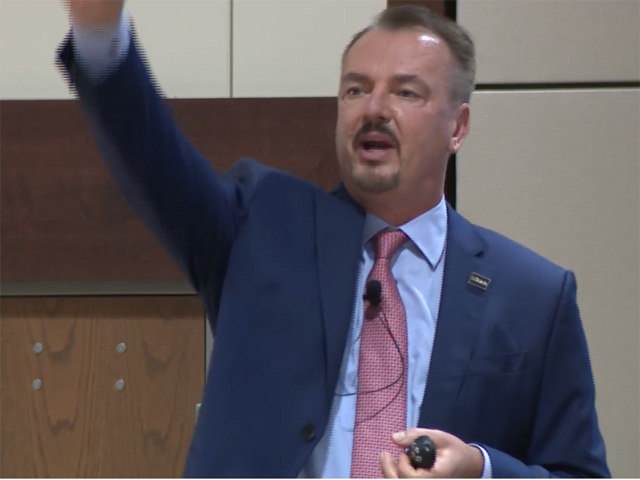