Josh Nelson refers affectionately to his Highland cattle as "long-haired hippie cows." They are definitely head-turners. But there's a lot more to the breed than meets the eye.

On Nelson's central Iowa operation, Cardinal Creek Farm, these cattle provide a consumer-direct revenue stream the fifth-generation farm family intends to keep building on. With Highland beef, Nelson said one of the first things new buyers mention after trying it is how tender and lean it is compared to supermarket beef. Those genetics are one of the big advantages of this breed.

"It's all about how the Highland grow," said Nelson. "Compared to your Angus, Highland cattle are much slower maturing. Their rate of gain is probably half of Angus. You finish them at an older age, around 2 years, when they'll average about 1,100 pounds on the hoof. The meat isn't as marbled as what a lot of people are used to seeing, but it's incredibly lean and really tender. Fatty cuts of meat don't necessarily mean tender. We have all been conditioned to think that's the case, but it's not true."

Studies in Canada and the UK, where naturally aged Highland beef is more common, report it registers higher on the tenderness scale than anything in the feedlot. A recent study from the Scottish Agricultural College notes the breed's heavy coat, which insulates against the climate, also reduces development of excess back fat. As a result, Highland beef has been consistently shown to be lower in fat and cholesterol than other breeds.

UK studies give some specific data, showing fat content per 100 grams on a Highland at 4.5 grams; other beef breeds overall averaged 15.6 grams. Cholesterol content was 40.9 grams on the Highland; 64.3 grams in the other breeds.

Numbers like that, along with the experience of eating Highland beef, have built a strong customer base for the Nelsons. But like other producers trying to market directly, they've run into backlogs at the locker this year.

"COVID-19 broke out during what is our traditional marketing time," said Nelson. "The steers were ready to go, the customers were ready, and then everything started slamming shut. We were lucky we got all the cattle harvested except one steer."

Like most good things, Nelson never saw his Highland business coming. His intention after working for a couple of cattle operations was to raise Herefords. He was especially interested in the grass-fed niche. But one thing led to another, and he met a guy who raised Highlands. When he started learning about the breed, and how well they did on forages, his plans changed.

"I started out small, with just four head. I still had it planned that I'd get some Hereford, but the more I was around the Highland, the more I appreciated their character and temperament, and the quality of the beef."

"They tend to take care of themselves. Give them water, shade and grass and you're good," he said. "They can be like big puppy dogs. We have one heifer, Effie Mae, and she is moody if you don't brush her every day, give her pets and treats. She's a sweetheart. Never did I think I'd be talking about a cow like that. But she's one you never worry about having your kids around. She might poke you in the rear if you're slow with the treats, but that's about as bad as it gets."

And what about those horns? Cows can have up to an impressive 48-inch span. Nelson said most people don't know it, but those horns have a purpose that goes to more than protection against predators.

"Their horns act like big radiators; they are a heat exchanger. There's blood flow in horns, and if you grab them on a hot day, they are really hot. Even on a 100-degree day here, I haven't seen them struggle. They go in the shade, catch a breeze and lay down."

Like many cattle producers, Nelson likes the idea of crossbreeding to see if he can improve performance. He's trying a Gelbvieh-Highland cross, aimed at giving him more supplies throughout the year. His choice of the Gelbvieh was considered.

"In my experience, they have the same temperament as Highlands -- calm and not too flighty, spooky, or aggressive. My 4-year-old daughter helps me feed cattle, and I'm not afraid to bring her into the pens with me. The cross gives me a bigger, more muscled frame, but it's still hearty in the winter, and the meat is tender and flavorful. So, it doesn't change the character of the beef, but I think it gives me more flexibility."

Last year, Nelson ended up harvesting five to six head for direct sales, with a goal of getting to at least 10. He's also hoping to get noticed in the purebred world of Highlands, where good genetics can boost prices and sales opportunities.

To get an idea of price, Nelson says at recent auctions, he's seen average prices for registered Highland brood cows between $1,500 to $3,200. Highland females are generally sold as unbred yearlings. They are bred around 2 years of age.

Prices on show-quality animals, like in any breed, can quickly climb. Nelson said he's seen these animals hit the $7,000 mark quickly, with the high price at a sale in Wisconsin hitting $7,200 for a heifer.

Today's availability of high-quality semen from champion bulls, and improved conception rates using artificial insemination, have opened the door to more genetic diversification for many producers.

"A lot of people are playing with AI on these cattle now," said Nelson. "Even though this is a small cattle world, we are able to capture that genetic diversity through the use of this technology. Plus, this means I don't need a bull." 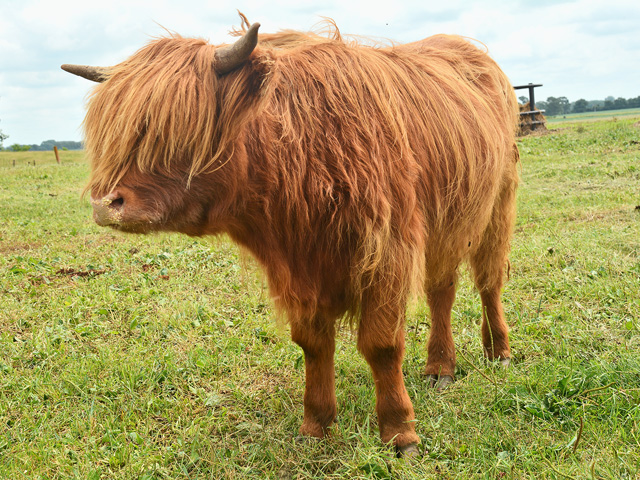