Whether it's called Management Intensive Grazing (Barthe's preferred term) or intensive rotational grazing, or even mob grazing, this Norwood, Louisiana, grazier says the idea is to put a lot of animals in a small space for a short time, and then move them.

Barthe first gave Management Intensive Grazing (MIG) a trial run at his small place in Mississippi. This was before he came back to the family farm in Louisiana back in 1989.

In that trial run, he bought 250- to 300-pound calves and stocked them on three, 5-acre plots of ryegrass. He was stocking at a rate of approximately 800 pounds per acre.

"They gained like crazy," he recalls. As for his neighbors, he says, "They thought I was one crazy Cajun."

The fundamentals of Barthe's program are anything but crazy. It starts with understanding the need to rest forages.

"The rest period is more important than the time you graze, and it is going to change across the year. It depends on water, temperature and how many animals are on it. That's a difficult basketball to dribble across a dirt floor," Barthe says with a laugh.

On the 250 acres of pasture he manages with his brother, Sammy, that rest period can go from 30 days in the winter, down to 16 or 17 days in the summer, when forages are growing fast. One of the challenges of the system is not letting forages get too mature.

"The quality of grass depends on the maturity of the grass, and that depends on temperature, water and age. When Bahiagrass reaches the seedhead stage, it's done," he says.

"MIG is nothing more than a high-quality haying operation. If you manage for hay quality, you cut it every 28 to 35 days, then rest it for that long."

2. TAKE HALF, LEAVE HALF

Barthe says they try not to graze anything but tall grasses. It's something they learned over the years, and it's key to a workable program.

"We used to graze it down to the deck, but it handicaps grass to take it down to zero," he says. "That forage is your solar panel. Now we leave 6 to 8 inches."

University of Georgia animal scientist Jennifer Johnson Tucker agrees. "A rule of thumb we use, especially with new graziers, is take half, leave half. The carbohydrate reserves are in the roots and spark regrowth. If you deplete them, it takes longer for the forages to regrow."

She adds this is species specific. "The summer annuals, like Sorghum-sudangrass, and native warm-season grasses like eastern gamagrass, should be grazed higher. You can go in when they're around 18- to 24-inches tall, but you need to come off when they're down to about 10 inches to leave enough leaf area.

"Bermudagrass and bahiagrass are more tolerant of shorter grazing and can withstand pressure down to 3 inches. But leaving more material results in greater regrowth potential during the rest period."

Their average paddock size is around 90 feet wide (the width of three trips with the spreader cart) and up to 300 feet long, depending on the amount of forage available and how many animals are in a group. Cattle are normally only in a paddock for a day before they move.

"We can grow enough forage year-round with 2 to 2.5 acres per cow if we move them every day," explains Barthe.

Barthe didn't used to believe electric fencing worked for his system. But a few bulls changed his opinion.

"In 1989, we had Brangus bulls and Longhorn bulls, and they were out [of the fences] more than they were in," he recalls. He took a tip from grazing gurus like Allan Savory, R. L. Dalrymple and the late Allan Nation, and gave electric fencing a try.

"We've been using it ever since," he says. "We won't put a piece of barbed wire on this place. If we have a cow that doesn't respect it, she goes on the trailer."

They carry four herds, totaling around 85 Angus-Brangus cows and replacement heifers. Perimeter fences are six to eight wires, permanent interior fences are three wires. They use temporary posts to keep around 150 paddocks in place.

Rather than trying to get water to each paddock, they simplified the process by using lanes to get cattle to water. Two herds water out of ponds, the rest drink from troughs using piped-in water from the parish.

Cattle take care of the fertility needs of most of the pastures here. The one exception to a "no-commercial fertilizer and plowing rule" is a 20-acre field of ryegrass they keep for 20 or so replacement heifers.

Barthe explains they want heifers to be grazing that rye by Dec. 1. Cows often won't get into green grass until sometime in January. Starting those heifers earlier not only helps with body condition, but it also improves conception rates moving forward.

On paddocks where they aren't in as much of a hurry, they broadcast ryegrass seed. A chain harrow pulled in one direction, then 90 degrees back across is enough to incorporate the seed.

"It is a little slower to come around than the plowed ground, but we have a lot of low ground and it is wet. Cows would be knee deep in mud and would ruin it."

Since they have a gap between when the summer forages will go dormant and when winter grazing becomes available to cows, Barthe and Sammy hand-feed purchased supplement by carrying five-gallon buckets to troughs. They'll feed anywhere from 15 to 20 tons a year. They also usually purchase around 300 roles of hay for this time period.

"We rarely have to spray a weed," says Barthe. "As your soil begins to work, there is a symbiotic relationship between soil organisms. They operate to make good grasses stronger."

He adds, however, "One man's weeds are another man's treasure. If one cow will eat it, others will mimic her."

As for insects, Barthe puts a lot of store in dung beetles. He notes they feed on fly larvae in manure, keeping fly populations down and eliminating the need to use insecticides.

Barthe says they do a lot of summer stockpiling -- mostly of Bahiagrass, Bermudagrass, smutgrass, Broom-sedge and weeds.

"Weeds are the first thing they go after," he says. "They eat them to the ground. We start stockpiling around the first of July and don't use it until the first frost, which is usually around the beginning of November."

When feeding stockpiled forage, they portion out a 300-foot-wide paddock and give cows around 6 feet a day with no back fence.

Pelvic measurements are done on all potential replacement heifers, in part to help prevent calving difficulties but also to manage cow size.

"The minimum we'll keep is 130 square centimeters, but we've kicked out a 230-square-centimeter heifer. You can't grow enough grass to fill up a cow over 1,200 pounds. Heat wise, they can't take it either."

Although Barthe is passionate about MIG, he is quick to emphasize, "You've got to adapt it to your operation and your environment. Experiment to see what works for you." 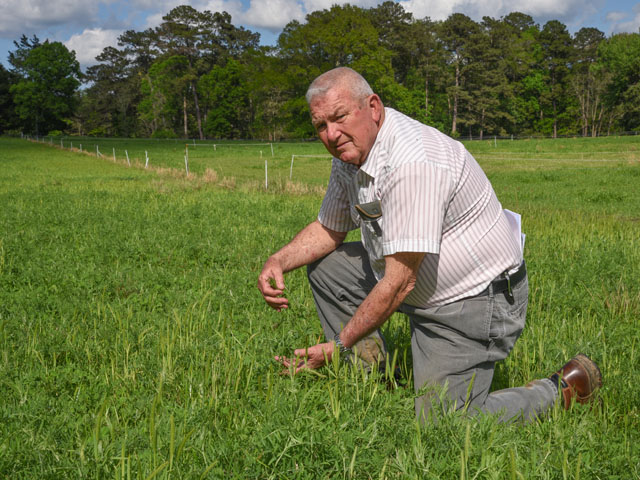