Chris Hardee isn't one to procrastinate, especially when it comes to preparing his home-raised calves for a trip to the feedlot.

"Calf health starts with the cow herd," he stresses. "A healthy cow that has been properly vaccinated and has good nutrition will put a healthy calf on the ground."

The Chiefland, Florida, rancher believes a lot of the pain and agony backgrounders and feeders deal with could be prevented with this simple mindset. It matters to Hardee, partly because it's the right thing to do for the industry, and partly because he has a vested interest in how his Angus, Brangus, Charolais and composite calves do in the feedyard given he typically retains ownership on them through harvest.

University of Georgia (UGA) veterinarian Brent Credille says Hardee is spot on. "In the last 10 years, there is a lot more data that shows the nutrition of the cow during pregnancy has a profound effect on calf performance, health and profitability," he explains.

And while there isn't as much data on the value of cow vaccinations for unborn calves, Credille believes it exists. "There is a Canadian study that shows calves stayed healthier and performed better when their dams were on a herd health program. Apparently, some of the immunity is transferred through the colostrum."

Hardee is a believer. He starts replacement females with a Leptospirosis (lepto) and Campylobacteriosis (vibrio) vaccine a few weeks pre-breeding. Late summer, mature cows get a clostridial booster while he processes spring-born calves, then a lepto-vibrio vaccine in October come weaning. In the spring, the cow herd gets a booster against respiratory diseases, often a dewormer, and if flies are already a problem, he'll tag them.

Along with vaccines, Hardee is adamant about giving herd females a high-quality mineral with an ionophore, especially before breeding.

"It helps us with coccidiosis and we're not having to treat scours and pneumonia. We stock pretty heavy in April and May. It can get dry and dusty, and it is easy for calves to get respiratory problems," he says.

To get cows and first-calf heifers in good body condition for calving and re-breeding, Hardee counts on winter annual mixes like oats and wheat. Then cows and calves ease over onto bermudagrass, bahia and crabgrass/hairy indigo pastures.

The vaccination program for calves starts in the spring when they're around 8 weeks old. They get an intranasal against respiratory diseases and a Pasteurella to boost immune systems. A second round of a respiratory vaccine and a seven-way clostridial is given a month later. If the grass is grazed a little short, calves are dewormed.

Come weaning, calves are vaccinated against respiratory diseases, and a couple of weeks later, a blackleg vaccination and a dewormer. They won't get another vaccine until the end of preconditioning, when it's another intranasal vaccine for respiratory diseases just before they get on the truck for the feedyard.

While Hardee's program is extensive, and the evidence is that it works, UGA's Credille says he tells his clients they can pare it down a little and still see benefit.

"The basic protocol I use for my clients includes two vaccines, one before weaning and the other at weaning," he says. When calves are 1 month to 4 months old, he recommends an intranasal vaccine for respiratory diseases and a blackleg vaccine, preferably with tetanus added if his client bands calves to castrate.

"Intranasal vaccines enable us to bypass maternal antibodies," says the veterinarian. "They target the sites where respiratory diseases are more likely to enter the body, through the nose and upper airways."

He holds off on deworming unless the producer is selling calves at weaning. "Resistance to dewormers is a real issue in this area, and calves this age generally have a low level of parasites. Not deworming can save you money, and in young calves, it can help prolong the time dewormers will be more effective. The earliest I'll deworm is 4 to 6 months, and that's for clients who aren't keeping calves but are sending them straight to the sale barn at weaning."

Early deworming will usually add a quarter of a pound a day to the calves, he says. But if the producer is preconditioning after weaning, he recommends waiting on the dewormer.

"Most importantly, make sure you use two different dewormers," stresses veterinarian Credille. "Use a pour-on or injectable of the Ivomec type in combination with a white paste dewormer, and make sure to use the full label dose of each. We see a big benefit from that, around $10 a head."

At weaning, he recommends going to a five-way modified live virus (MLV) vaccine for respiratory diseases rather than a killed vaccine. In addition, he recommends another blackleg vaccine. Normally, he doesn't give another round of vaccinations, even during preconditioning.

If you do booster your calves, he emphasizes the importance of following vaccine labels as to timing. For MLV vaccines, the time frame is two to four weeks. For killed products, it is 35 to 42 days.

"The biggest issue is giving them too early," says Credille. "That can do more harm than good."

Hardee says freshly weaned calves generally average 650 pounds. The first three days, they are in a pen with high-quality hay and 3 to 4 pounds of medicated preconditioning feed per head, per day. Over a three-week period, he transitions them to grass traps, then to pastures.

At the same time, he gradually increases feed to 8 pounds per head, per day. After three weeks, he'll swap to a non-medicated, high-fiber 13% protein feed.

"I keep the bulk of the calves until they weigh 750 to 800 pounds. I don't like to sell or ship a lighter calf. If corn is cheap, we'll ship calves 60 days post weaning. If not, we'll stretch them out on a cheaper ration."

Credille, too, is a strong believer in longer preconditioning periods, whether a producer retains ownership or sells calves.

"The profitability of preconditioning is primarily determined by average daily gain (ADG) and days on feed. It takes at least 45 days to get your investment back. We find you may not get extra health benefits from 60 days or longer."

Hardee depends on input from his two local veterinarians, as well as his son, Isaac, who is a veterinarian for a large integrated beef company, to help him fine-tune the ranches' herd health and preconditioning programs. His team also includes manager Garrett Edmond at his Chiefland ranch and Thad Thompson at his Oklahoma operation.

Their approach seems to be working. Out of the 300 head they feed annually, both home-raised calves and purchased calves, Hardee says he'll usually pull 2% to 5% during preconditioning. At the feedlot, death loss is less than 1%.

"The first two-thirds of the cattle we had in the feedyard last fall gained 3.93 pounds a day with a conversion of a little over 5 to 1. The cost of gain was 69 cents per pound. The freight boosted up the cost of gain, but we still made money. That's why we're convinced prevention solves a lot of issues. It goes back to the cow herd, with a healthy cow that has been properly vaccinated and has good nutrition." 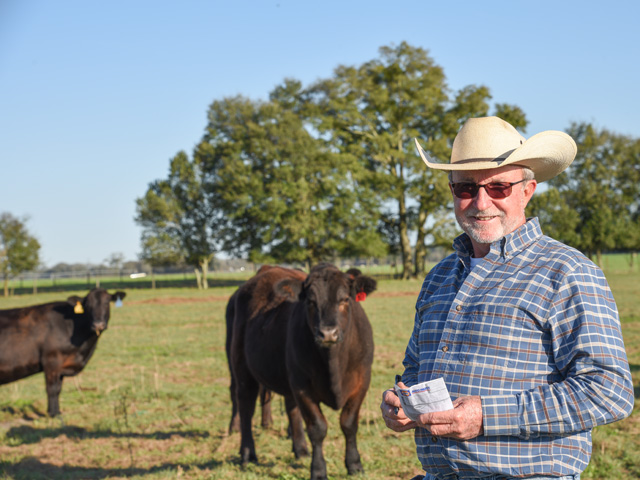