Double stocking calves is proving to be a way beef producers can boost profits without adding ground.

A University of Missouri study from their Southwest Research Center in Mount Vernon, now in its third year, is looking at how to graze the same number of calves in half the time, with resulting better weights.

Sound too good to be true? Add to that the calves are grazing tall fescue, says University of Missouri Extension beef nutrition specialist Eric Bailey.

The specialist explains the goal is to match tall fescue's growth curve, and its peak time for nutrition, to calf development. The key, says Bailey, is understanding when that tall fescue is yielding the most nutrition for the most gain.

Because of the way fescue grows, Bailey notes, many operations don't have enough cows to graze all of the spring flush, leaving them to harvest excess growth as dry hay. The timing of this harvest will affect feed quality. A University of Tennessee study shows cattle eat more, gain more and get more nutrients in early May, when fescue there is in late boot to head stage. That research notes fescue yields significantly affect daily rates of gain. In early May, each cow takes in 13 pounds of fescue per day, for a gain of 1.39 pounds. This is when total digestible nutrients (TDN) are at their highest.

That same study shows that, by mid-May, cattle reduced fescue intake to 11.7 pounds, and gains went to 0.97 pound per day. TDN dropped as yield per acre increased.

By the end of May, cattle ate 8.6 pounds, and gains were at 0.42 pound with a lower TDN of 56. At this stage, yield was increasing significantly, and hay was forming early seed.

Bailey's three-year study mimics a double stocking grazing strategy from Kansas State University that goes to the 1970s. He said MU researchers set out two years ago to test the interaction of nitrogen and a herbicide intended to control tall fescue seed heads. They pulled calves off pastures before July 4 to avoid the summer slump. In the process, they noted major weight gains in calves at average daily gains of 1.55 pounds in the control. That was the no nitrogen, no herbicide control. Bailey attributed this to grazing pastures for half the time, with twice the number of cattle.

"We have a tremendously productive forage system in Missouri," Bailey says. "Other states talk about acres per head; we talk about head per acre if this concept takes off. Imagine a custom grazing scenario where someone sends you calves to graze on land you have leased. It is not a capital-intensive business model." 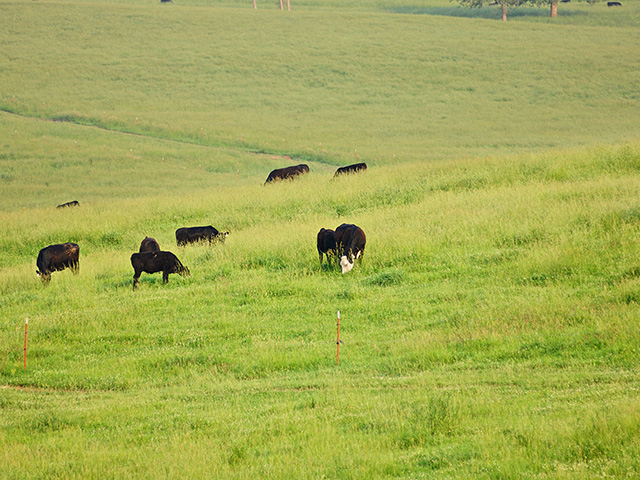