She looks like a walking refrigerator. She probably weighs well over 1,500 pounds. Is she on the cull list come fall? Slow the roll. Weight isn't all there is to efficiency in a cow herd today.

Ryon Walker, livestock consultant at Noble Research Institute, says there's a lot to consider when looking at how efficient a cow herd is overall. Weight is a starting point, but there are a few other things commercial producers should consider.

"Cow size is a start, but we can't just go in and get rid of all our big cows," he says. "Most producers don't know what their cows actually weigh. They are pretty terrible at guessing those weights, and we've found they almost always underestimate. So, when we're talking about cow size, I encourage people to get specific first."

That said, it is a fact that all cattle sizes have been trending up for the last five decades. Data from the National Agricultural Statistics Service (NASS) shows that between 1962 and 2015, carcass weights have gone up significantly for bulls, cows, steers and heifers. Cows, for example, averaged 509 pounds (chilled carcass weight) in 1962; and in 2015 were coming in at 662 pounds. Steers went from 654 pounds to 884 pounds over that same period.

In terms of sustainability, there is a positive side to this. While production of beef has increased in pounds, the number of cattle slaughtered to achieve that production has decreased. The May 2019 NASS report, "Livestock, Dairy, and Poultry Outlook" notes that in the cattle business: "... record beef production has been achieved with fewer animals as the result of an industry that has changed dramatically over time. For example, improved breeding practices have helped produce more efficient cows that have offspring with better growth rates and feed conversion efficiencies.

Enhanced cattle performance on grass and in feedlots has provided faster turnover of feeder cattle with heavier carcass weights. These cattle make their way through the value chain as a better and more consistent product thanks to improved feeding technologies and better husbandry practices, enabling the industry to produce more beef per cow."

This tracks with other data that shows over this same period of time, the cow-calf segment of the beef industry has improved weaning weights significantly. Noble's Walker says this is a result of more selection for growth and performance at the producer level. He explains there are strong genetic correlations between weaning weight and mature cow size -- particularly in Bos Taurus breeds (Angus, Hereford, etc.).

In terms of feed efficiency, though, there are still a lot of unknowns.

"We are seeing more intention at the producer level in terms of selection for feed efficiency, but it's too early to know if that is going to impact cow size," he explains. "Feed efficiency traits aren't that old; we need several generations of data to evaluate what the overall impacts will be of an emphasis on feed efficiency in the cow herd."

As producers work to maximize the efficiency of cow herds, Walker says the environment is key. Match the cow to her environment.

"In New Mexico, you can't have a 1,500-pound cow, for example. But in colder climates, it takes a bigger cow. So you have to consider environment as part of this selection process."

He notes that research shows with cow-to-cow comparisons of animals of the same weight, with the same body condition, there was a 4- to 6-pound difference in dry matter intake per day. Cows of the same size, then, can eat different amounts, and have calves that all wean at the same weights.

"Phenotype may be the same, but there can be this big difference in feed intake," he explains. "And if you multiply that times 365 days a year, it's a huge difference in input costs."

Jason Smith, beef cattle specialist at Texas A&M, says when he looks at replacement heifers with producers in the state, he sets some basic selection criteria. He considers: As a calf, was she healthy? Did she perform well? Did she become pregnant during the breeding season? Was she able to calve without assistance by the time she was 2 years old? And was she able to rebreed and do it again the next year?

He calls this "bare-minimum criteria" adding that to stay in the herd she will also have to be able to maintain acceptable body condition with little to no protein or energy supplementation. And she must wean a healthy, desirable calf that meets expectations year after year.

"If she can't do those things, she doesn't fit your environment and will hinder your ability to move forward," he says.

There's a lot of research that shows a heavier cow does not necessarily wean a heavier calf. Researchers at the Dickenson Research and Extension Center in North Dakota, for example, evaluated production efficiency in their herd and reported a 300-pound range in body weights on cows from heavier to the lighter dams. The heavier cows only produced 1 pound more calf at weaning.

Walker says one of the key takeaways for producers is that to properly evaluate a cow's contribution to the herd, they have to know which calf was weaned by which cow. This is the only way to determine whether a cow is the best fit for a particular herd and environment.

"We can't rule out a cow that produced a big calf, just because she's a big cow. We need to question her overall value, looking at several factors," he says.

Smith cautions there are times when producers can focus too much on output, without considering what else may come along for the ride. Selecting only for weaning weight or yearling weight, without considering other growth- or size-related traits will cause mature cow size to increase. That increases overall nutrient requirements, and forage intake.

"That doesn't mean we can't use genetics to select for improvement in weaning weight, it just means we need to divergently select the genetics that will allow for an improvement without increasing cow size."

Noble's Walker says everything circles back to good data. He acknowledges some producers don't have scales, and in those cases, he says to rely on body condition score of a cow at weaning and frame score.

"Frame scores have a high correlation with weight, so if you consider that along with your sell weight on a calf, you will have a basis to make decisions. What's important is that you marry those two pieces of data. I know it sounds simple, but you really need to know what calf belongs to what cow."

Jason Smith agrees with Walker, adding there is a lot of value in a set of scales. He believes those producers who make that investment, are quickly paid back.

"If we want to get a handle on where we are as far as mature cow size, we need to level the playing field by correcting weight for body condition," he says. "It is incredibly difficult to manage what you don't measure."

Walker recalls a producer who started a herd from scratch and didn't have a set of scales. Walker convinced him to make the investment.

"He did, and when he weighed his cows the first time, he told me he was shocked at the variation. There was a 900-pound difference from his lightest to heaviest cow, and he did not have a clue. Because of that, he wants to know even more about the herd. He's measuring weaning weights, and looking at the pair, instead of just the cow, so he can be more efficient overall."

If, after calving, a cow can't get rebred on time, she's not an efficient member of the herd, notes Walker.

"If she can rebreed early, even if she's thin at weaning, that's a positive when it comes to evaluating her place in the herd. But if lactation has caused her problems, and her body isn't ready to rebreed, she probably doesn't fit the program. There's no way to know, though, without good record keeping. That's the beginning."

He adds that especially during times of market vulnerability, it's key for producers to control every aspect of their cattle program they realistically can.

"We can't control markets, but we can control how efficient our cows are and how they reproduce. We can control average weaning weights we are seeing. We have our biggest impact as producers when we look at return on cost. That cow with good body condition, who doesn't need us to sink a lot of money into her, and she rebreeds early and produces a good calf ... she should stay in the herd. It's not all about size of the cow." 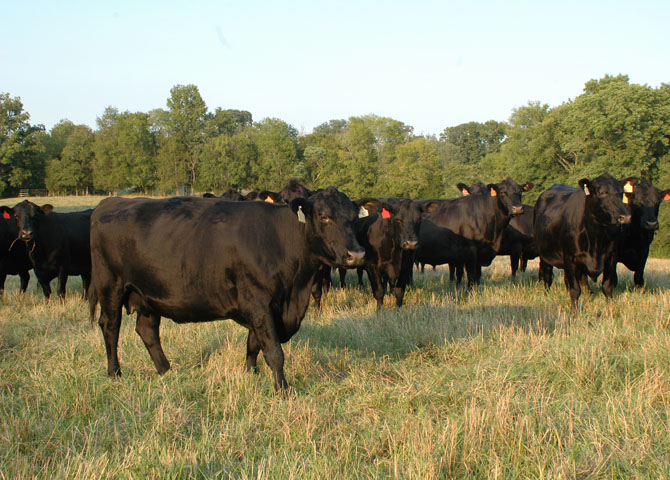