In 1984, Lynn Brewer was pictured in the April issue of Progressive Farmer magazine with his grey Quarter Horse mare, Roanie. At the time, he was cattle manager at Oak Hill Farm, a 1,500-cow commercial operation in Leesburg, Georgia.

The article talked about how Brewer was using one injection of prostaglandin to successfully synchronize the herd cows, as well as 500 replacement heifers, and then breeding them by artificial insemination (AI). At that time, this was new technology, and Brewer was an early adopter.

Times have changed a little. Brewer partners with a sorrel now--this one named Dot, from the same home-bred family as Roanie. He rides herd today at Wil-Mill Farms, a 490-cow purebred Angus operation, still in Georgia. And at 76, Brewer admits to moving a little slower. But he's still focused on practices that pay in the cattle business, namely AI and herd synchronization, which he and herd owner Henry Griffin rely on today, just as much as he did in 1984.

Back in the day, at Oak Hill, Brewer says "synchronization helped" the crossbred herd. "A bunch of calves were born during the first part of the season, thanks to that technology. We didn't have to stay up as many nights during calving season, and we didn't get as tired."

He also saw increased weaning weights, better quality and more uniformity in the calf crops that followed adoption of AI and synchronization. He preconditioned and backgrounded 550- to 600-pound weaned calves, gains were 2.0 pounds a day until he sold them in truckload lots. "It absolutely helped the quality. We got a lot of repeat buyers," he says.

That pattern of success shows on Wil-Mil steers today. Calves that don't meet Brewer's and Griffin's standards for seedstock are castrated, preconditioned and sold in uniform truckload lots where they, too, are bringing in plenty of repeat buyers.

On bulls, Griffin has the added expense of developing them to two-year olds for his annual sales. However, they typically sell for $3,500 to $4,000, a nice premium over those feeder steers.

University of Georgia reproductive physiologist Pedro Fontes is a staunch advocate of AI and synchronization, both in commercial and purebred herds. For approximately $20, he says producers can get genetics from a bull in the top of the breed for traits ranging from calving ease to marbling.

Since these bulls have been used on hundreds, or even thousands of females, he adds: "We know what to expect from their offspring with high accuracy. With a clean-up bull, we can estimate how the offspring will perform based on Expected Progeny Differences (EPDs) but the accuracy is not as good."

While the advantages of AI in terms of the potential genetic boost it can offer any herd, Fontes believes it's synchronization that's the real game changer.

"Synchronization means not only that we can AI the whole herd at a predetermined time, but that we can increase the number of cows pregnant early in the breeding season," he explains. Besides saving the producer hours of twice-a-day heat checking to AI at the right point in a cow's cycle, Fontes says, "with synchronization 40% to 60% of cows in a herd will get pregnant the first day of the breeding season. Subsequently, they will have more time to recover from calving before the next breeding season. Therefore, they are more likely to rebreed, increasing overall profitability."

There is also a connection between synchronization and weaning weights. It's basic, but often missed, that because a majority of the calves are born earlier in the season, they will be older, and hence significantly heavier come weaning time. Those extra pounds are a direct add-on to the bottom line.

Potential replacement heifers also benefit from a good synchronization program, says Fontes. "Heifers born earlier in the calving season are older at breeding. Consequently, a greater percentage of them will reach puberty sooner, breed earlier in the season, and become early-calving cows. We're setting them up for success."

At the North Florida Research and Education Center in Marianna, Florida, where Fontes did part of his graduate research, Cliff Lamb, now at Texas A & M, led a case study where he evaluated the use of reproductive technologies on the subsequent value of the calf crop.

Lamb started with a herd that only used natural service during a 120-day breeding season. Estrus synchronization and AI were used in combination with a gradual decrease in the length of the breeding season. Early-bred heifers were used as replacements, and open cows were culled every year.

Over six years, Lamb was able to shorten the breeding season from 120 days to 70 days. The pregnancy rate increased from 81% to 93%, and calf value increased by $169.26, based solely on weaning weights and using a $1.49 price per pound as the benchmark.

Fontes recommends synchronization even if a producer doesn't feel he can AI the herd.

"There are synchronization protocols for natural service. You don't benefit from the genetic aspects of AI, but you still benefit from altering the calving distribution. Since more cows or heifers will come into heat at the same time, it's important to give preference to experienced bulls," he adds. To play it safe, he says plan on a ratio of one bull to no more than 20 to 25 cows. Also make sure your bulls pass a Breeding Soundness Exam first, every season.

At Wil-Mil, AI adds too much value to calves to be left out, so they stick with the AI-synchronization combination. Currently they use the 7 Day CO- Synch + CIDR protocol. On day zero, a Gonadotrophin Releasing Hormone (GnRH) injection is given and a Controlled Internal Drug Release device (CIDR), containing progesterone, is inserted in the vagina of the cow or heifer. On day seven, an injection of prostaglandin is given and the CIDR is removed. After 60 hours for cows or 54 hours for heifers, insemination proceeds with another injection of GnRH.

Cost for the 7 Day CO-Synch protocol is around $18 to $20 a head for the drugs. That doesn't include labor, the AI technician's fee or the semen.

"We tried the 14-day CIDR program but we got about the same results, around 50% pregnant, as we did with the 7 day program," says Brewer. They also tried heat checking after they removed the CIDR and only breeding animals that showed standing heat, but he says that didn't really boost conception rates, either.

Some producers believe they get higher conception rates by heat checking when they remove the CIDR and breeding any animals that show standing heat. However, Fontes says in their case the increase in conception rates, if any, is usually small enough it doesn't justify the extra labor.

Both Fontes and Brewer agree AI and synchronization aren't a cure-all for every deficit in a cow herd.

"The protocols that use a progestin can induce cyclicity," says Fontes. "However, if the cows are already cycling they'll do better. They have to be well fed and well managed."

The animal scientist recommends having cows in a Body Condition Score (BCS) of 5.0 to 6.0, based on a 1.0 to 9.0 scale with 1.0 being emaciated and 9.0 being obese. He also says the rule of thumb about waiting to breed heifers until they reach 60 to 65% of their expected mature weight is also a sound one.

At Wil-Mil, managing toward conception includes a complete herd health program starting at birth and continuing through the animal's life. Brewer and Griffin keep cows and heifers in breeding shape with Tifton 85 bermudagrass and pearl millet grazing in the warm months and rye and oat grazing during the December-February breeding season. At breeding, they supplement mature cows with hay, Tifton 85 baleage and a Total Mixed Ration including gin trash, dried distillers grain, peanut hulls and peanut skins.

As for those first-calf heifers, Brewer says it's important to give them some extra attention. They start feeding them a little prior to calving, to help build up extra reserves for what is a stressful period in those heifers reproductive lives.

"I believe if you keep a herd healthy and comfortable, a lot of things will take care of themselves. It doesn't take an Einstein. You just have to be willing to do it every day."

Fontes adds, "A successful A.I. program also requires a willingness to try. If you don't have the facilities and labor, there are folks who provide that service and can even provide portable chutes and corrals."

Then or now, commercial or purebred, grey or sorrel mare, Brewer says, AI and synchronization are still worth the trouble when it comes to keeping a herd on track. Some things, thankfully, don't change. 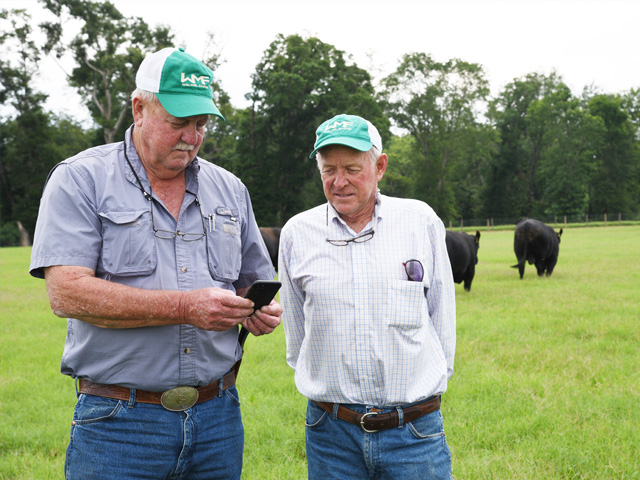