STEAMBOAT SPRINGS, Colo. (DTN) -- In an often shrewdly efficient business, the math of ranching doesn't always add up at 9,000 feet of elevation. The land is expensive, and the seasons are, as Travis Snowden puts it, "June, July and winter."

Until you add in one major X factor.

"It's sentiment," said Snowden, 32 years old, who ranches with his wife, Sarajane, 29, in southern Routt County, Colorado. "We both have family roots here. It's hard to explain, but you ride through the mountains, you see the aspens, you ride up on a bunch of elk, feel the quaking trees, see the fall colors. Yeah, it's a hard area to ranch, but it's a pretty easy area to fall in love with."

The Snowdens run 450 cow-calf pairs and 150 yearlings in the heart of the Rocky Mountains, 25 miles south of one major ski resort town, Steamboat Springs, and 70 miles north of another, Vail. Their pastures get more than 10 feet of snow a year, and some years don't fully melt off until May.

"You certainly pay for the views," Travis said with a laugh.

But they don't plan on moving, and instead are looking for land in the county to purchase.

"We have such a support system here," said Sarajane, a fourth-generation rancher in the area.

Her great-grandfather lost a brother in a coal mine accident and decided he'd rather work cattle on top of the earth rather than take his chances beneath it. Her family has been working the land ever since.

Travis was also born in the area, but moved with his family while young, first to ranch in southern Missouri, then Oklahoma, before finally returning after graduating from Oklahoma State University.

"We've looked at trying to leave a few times," Sarajane said, "but our parents live here. We have cousins and aunts and uncles to help out. It's definitely a family affair, and those roots run deep. It would be pretty tough to pull away."

It makes for long summer and fall days, maintaining any fence or equipment that might need work because that won't be nearly as feasible come winter.

"Every day in October and November without snow sticking is a win," Travis said. "You have a five-month season and you're trying to squeeze in 10 months of work."

"This is phenomenal grass," Sarajane said.

Both the Snowdens also split time working at a nearby private ranch -- Travis as the manager and Sarajane as the assistant manager. They could make ends meet without, they said, but it allows them some unique opportunities. This year, for instance, that income gave them the confidence to take a big risk in April on buying low on yearlings.

"From the outside looking in, it doesn't always look really feasible to do this here," Travis said. "People will look at us and say, 'Good God, those people are crazy.' But there's something hard to explain about working here. It's magical. Sometimes it feels like we're caught between sentiment and logic, and for now, sentiment is winning out." 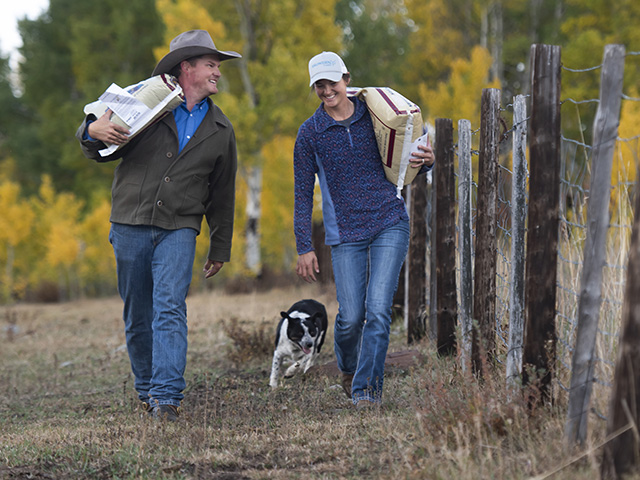