While producers have seen higher hay prices than this, few would call current marketings a bargain, making it important to continue to find easy ways to cut the annual hay bill, without sacrificing body condition.

Eric Bailey, beef Extension specialist with the University of Missouri, says there is this idea of a historical stocking rate of 3 acres per cow. But that is outdated.

"That stocking rate was established when we had 1,000-pound cows. Cows are bigger now, and because there are more pounds of beef eating off of the same amount of acreage, we think there's a resource limitation. Really, it's a mostly man-made limitation we are fighting."

Too many producers carry cows that should be culled, the nutritionist says. He has zero tolerance for a cow that fails to conceive.

"No cow should be given a second chance," he believes. "Otherwise you perpetuate mediocrity in the whole herd. If she fails to conceive in your farming system, she'll likely fail on retry."

Bailey adds even if the cow does conceive, the heifer she might produce is also likely to have a less-than-stellar conception rate. It sets the whole herd up for lower average conception rates. Simply put, every cow should produce one calf every 365 days. If she doesn't, she needs to be culled.

It's important to only feed enough hay to support the true weight of cows in a herd. Bailey knows most producers guess at cow weights, but he encourages a more realistic approach.

"There are more 1,600-pound cows than 1,000-pound cows running around these days," he says. "Nutritional needs vary greatly, and we can waste a lot of hay not knowing the real weights of our cows."

One good way to have an accurate estimate is to look at weights on the sale ticket for culls. This is likely to be representative of the rest of the herd, unless the cull is unusually poor at time of sale.

One really good reason to get the herd on a defined calving season is to make it easier to feed the right amount of hay and meet the nutritional needs of cows at different life stages.

Bailey says nutritional needs are at their highest for a cow between calving and rebreeding. From weaning to mid-gestation, her requirements are much lower.

"You don't want to pump a lot of nutrients into that cow at the wrong time. It won't help your business," he says.

Knowing hay quality is key, he adds. A mid-gestation cow, for example, needs a ration at about 55% total digestible nutrients (TDN); a cow with a calf nursing at her side needs hay with a 65% TDN. The same holds true for protein. Mid-gestation, 7% crude protein is a good level; but that lactating cow needs 11%.

As the season moves on, Bailey says it's important to stay on top of any trend toward below-average precipitation that will affect hay supplies in your area.

"If we see that situation developing, I encourage producers to avoid getting into their hay reserves," he says. "I really don't like to think about feeding hay in the summer."

He acknowledges practically every producer has the equipment to handle hay, and it's something they are used to managing. But byproduct feeds, he notes, can be a good option.

Look for things like soy hulls, wheat midds or distillers grains. Consider what is most cost effective in your area. Byproduct feedstuffs, unlike hay, are nutrient dense. Yes, you need bins or bays to feed them, and you need equipment to handle them. But augmenting cows' diets with feedstuffs can almost always keep up body condition and conception rates more economically than hay.

Baily reemphasizes it's important to feed based as much on true weights as possible. He recommends a supplement make up no more than 1% of a cow's body weight in her daily diet, which means limiting the feed.

"A cow with unrestricted access will easily consume 2.5% of her body weight a day," he says. "But fed at the correct rate, that supplement will be a small enough percentage of the overall diet that it can be given without causing digestive upsets."

For more information on byproducts: agebb.missouri.edu/dairy/byprod/listing.php 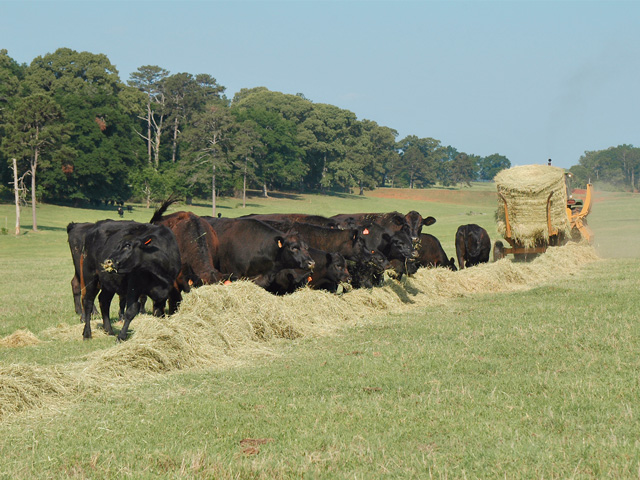