By Memorial Day meat supplies at retail grocery store could be 30% lower, with prices for both pork and beef 20% higher than those paid just one year ago.

That projection is part of a just-released analysis by CoBank lead economist Will Sawyer, who says as communities begin to reopen across the country there remains only about a one-week supply of meat in cold storage.

"Shortages and stock-outs in the meat case couldn't come at a worse time," noted Sawyer in an interview with this editor. "But what we are seeing isn't recreating the wheel when it comes to supply and demand. We aren't recasting economics as we know it."

He said the new report, "Closed Meat Plants Today Mean Empty Meat Cases this Summer," was important to release as a way of insuring CoBank's customer base is connected with what the public is hearing in terms of challenges in meat production and processing.

"We need to connect the facts. You have this bottleneck in meat plants, so for the livestock producer there are more pigs and more cattle, and lower prices. But on the consumer end, there are lower supplies and higher prices," he said, adding the general public needs to know that what is happening right now is going to impact them through the summer.

"The numbers are big enough now that we can say a 20% increase in meat prices at retail is a real possibility. We are seeing signs of inflation that will really start to hit people Memorial Day or sooner," he explained.

The economist added fallout from the Covid-19 crisis and its impact on the livestock industry will likely continue through the rest of the year. He reported that as livestock prices collapse, some industry associations are predicting 2020 losses as high as $13.6 billion for cattle producers, and $5 billion for hog producers.

"U.S. hog producers may still be forced to euthanize as many as 7 million pigs in the second quarter of 2020 alone," he said. "At historical average prices, that alone could be worth nearly $700 million."

Some of the moves lawmakers are discussing could offset some losses, he added. For example, giving the USDA authority to pay indemnities to producers forced to euthanize livestock may help offset some loses caused by the decline in plant capacity. But overall shortages, said Sawyer, and shrinkage of the U.S. livestock herds, will "likely make the food supply shortage more acute later in the year." Taken together, a lot of factors point to significant food inflation.

"In the past 20 years only twice have retail pork prices experienced greater than 10% inflation," he said. "Neither time saw inflation climb to 20%, which may be coming in the months ahead." Sawyer added even in the period from 2008 through early 2010, when hog producers were forced to reduce herds due to significant financial losses (a contraction of around 15%) the spike in retail pork inflation hit 17%. That 15% herd contraction was about half of what the industry is experiencing now. Taken together, he believed, pork and beef production is about 35% below this time last year setting the stage for an inflationary period.

"From what we are seeing this past week, it's beginning to look like supply and demand will work the situation out largely. The dip in capacity has been relatively short, we are talking about being down 30% to 40% compared to last year. Plants are coming back on line, so I'm hopeful that there will be no need to curb inflation artificially."

He added that his position is based on what appeared at presstime to be a trend where plants were getting back up and running at 70% capacity.

"The next two to three weeks will be critical for seeing where we are ultimately headed. Reopening plants is a first important step but getting workforce attendance levels back up will take longer. We are seeing commitments from plants to have PPE available, and to put in partitions and try to find ways to make this work. They can't fix this overnight. Right now, I don't think we will be back to normal by July 4th, although I know there are a lot of people who would like to see that. It just doesn't seem likely today." 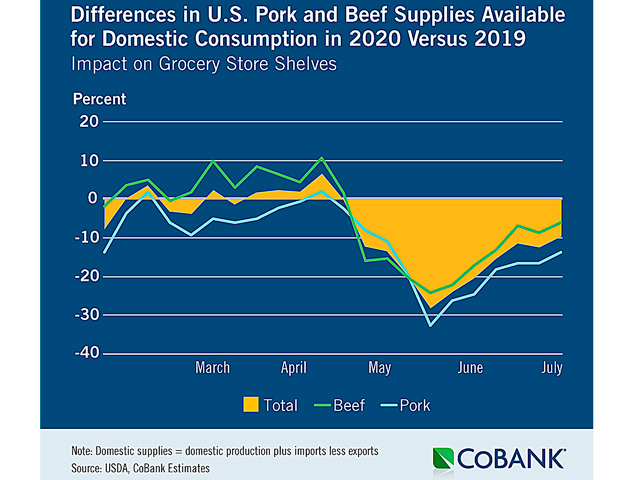