For 30 years, Phil Trowbridge managed a prestigious cattle and thoroughbred horse operation in upstate New York. Even though he and wife, Annie, worked brutal hours, housing was provided, and he flew all over the world compliments of those horses. In 2005, it all came to an end.

"It took me about three days to get over it," says Trowbridge, now 62. Fortunately, they had been building all along toward the future.

He had also made an investment in 1983 in a 12-acre farm in Ghent, New York. It was another one of those leaps of faith.

"I didn't tell Annie. It took every penny we had saved, $17,000," he admits. The farm, which he describes as a brush pile, didn't even have a barn or a fence. But, he and Annie took it on with son P.J. and daughter Amy in tow.

"They were so little, it took both of them to hold a board when they helped us," he laughs.

When 2005 rolled around, it could have been a cushy landing. It wasn't. The Trowbridges had to gather their resources and come up with a plan. Initially, Trowbridge worked bringing in off-farm income with consulting work for Angus and thoroughbred horse operations.

"We knew our cattle, and we knew what they were capable of; but 100 cows is only a part-time job. We did a little bit of everything," he says. P.J., now 38, even hired out with his tow truck. He hauled everything from bulldozers to grain in his tractor trailer.

The Trowbridges knew if they were going to turn this part-time cattle business into a full-time operation, they needed more than their current 400 acres of rented pastureland. They were able to buy a 55-acre former gravel mine, but more land was not an option. Only 90 miles from New York City, agricultural land here is normally $12,000 to $15,000 an acre.

"You can't justify farming that," Trowbridge states. There was a significant upside to the Trowbridges' location, though. A number of wealthy city residents own second homes and small farms in the area. They provided a way for the family to expand its cattle operation by renting or leasing open land to the Trowbridges.

"They like the way we keep our places, and in many cases, they come to us," Trowbridge says. "We maintain it like it is our own. They also like the ag assessment tax breaks they get."

He says a fair number of these acres are rent free or are at least low cost by area standards. A handshake is the basis of most of the rental agreements.

MAKE SURE LAND IS A GOOD FIT

"If you're in a location where land is in high demand, it is really hard for agriculture production to pay for it. Renting lets a producer expand without a huge investment," he notes. Still, even if there isn't a rental fee, Runge says there are factors to consider before taking on property.

"How convenient is it to your location? Is it accessible? Do you have to cross a major thoroughfare to get to it? How is the fencing? What kind of working facilities does it have? Is there anything hazardous on the property, such as poisonous plants?" he asks.

In Fauquier County, Virginia, county Extension agent Tim Mize notes fencing can be a major concern for those operations dependent on rented land. The county is only 50 miles west of Washington, D.C., and has the traffic that comes with it.

"In a lot of cases, all that's left of a fence is a little wire hung between trees. There is the liability issue of livestock getting on roads," he says. And, when fences do have to be built or replaced, there's always a question of who's going to pay for it.

Water is another factor, Mize says, explaining there is a push in the area to keep cattle out of streams and ponds. While cost-share money is available in some cases from agencies like Natural Resources Conservation Service and local soil and water districts, that doesn't answer the question of who is going to pay the rest of those costs.

Trowbridge is familiar with the issues, especially fencing. "It is a big thing. If we have to put up fence, we want at least a 10-year lease," he says.

Another issue is the fertility of the land. If it has been stripped by a former tenant, he asks the landowner to share in the cost of rebuilding it, noting it can "cost a fortune to get the fertility up."

Often, the toughest part of the rental arrangement, in Trowbridge's case, is when a landowner decides to sell the property. "A lease isn't much good then," he says, noting that while they've been fortunate, they've seen instances where a change has negatively impacted producers in the area.

Being known as good stewards of their rented acres has allowed the Trowbridge family to be more selective about the land they do take on. When they first went out on their own, they had cows as far as 20 miles away. Now, most are in a five-mile radius of their home base.

Between their made-over owned land and rented farms, they've expanded to 1,200 acres. That includes 350 to 400 acres of pasture, 200 acres of alfalfa, 100 acres of corn (mostly for silage) and 200 acres of grass hay. They've increased the cow herd to 200 head, including a few Herefords and Red Angus.

The increase in herd size means Phil and P.J. Trowbridge stay closer to home. Their annual bull sale markets 100 bulls, their female sale some 50 cows and heifers. Those sales bring in the majority of the family's income. They also hold a feeder calf sale to help promote customers' cattle.

VIEW OF THE FUTURE

Trowbridge says he still does consulting work, but most of his travel is to visit customers. P.J. has his own family, which includes wife, Miranda, and daughters Daisy (13), Lily (4) and Rosie (3). He supplements income with his tow truck and tractor trailer, as well as custom work, but spends most of his time working for Trowbridge Farms.

As for the future, Trowbridge says, "We have expanded as much as we're going to for now and are about maxed out for the time being. Our bull marketing has gotten stronger every year."

As the next generation comes along, Phil says it's a promise they'll continue to be good neighbors. They know it really does pay. 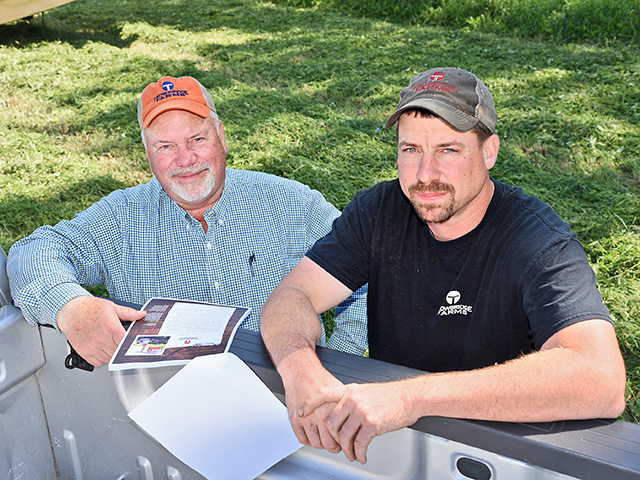