Beauty is in the eye of the beholder.

This ancient proverb may not exactly be the key to wealth and fame, but who among us has not found it to be the perfect ticket in avoiding unnecessary controversy and tension. To all but the most stubborn defenders of absolutes, it's an invaluable tool of cooperation and peaceful disagreement.

Nothing like it shrinks the distance between, say, Van Gogh's "Starry Night" and a paint-by-number portrait of an angry clown on black velvet. Or, for that matter, helps to mitigate conflicting preferences between royal wedding protocol on one hand and a free pasta buffet at the Elvis Chapel on the other.

As strange as it may sound, I owe these thoughts on the relative nature of "beauty" to the harsh winter reality of the polar vortex and a rather foolish drive through Nebraska's Platte Valley in late January. Cutting my way through freezing temperatures and subzero wind chill, the magnificence of nonstop vistas (or so it seemed) of black cows on blond stalks often made it difficult to keep the truck safely focused between icy ditches.

In terms of life-giving heat, the winter sun proved as useless as a broken radiator. Yet its high-noon rays only seemed to sharpen the black-and-blond contrast, especially against the white etchings of freshly fallen snow. Here was a breathtaking combination of animal and landscape that urban sightseers could never imagine.

To be sure, the beauty I beheld that day was skewed by a country eye long trained on the cyclical pattern of beef production. It had developed the pleasant habit of blinking from calving to turnout to roundup. So seeing a kind of splendid artwork even in the rawest of winter nurseries should not be surprising.

Perhaps more important, the black noses aggressively rooting through trampled cornfields were much easier to admire given anonymous ownership. Beautiful or skinny packages of humps and bumps; brave warriors against extreme elements or under-hayed scavengers on last legs -- they were not my cattle.

Indeed, I was regularly reminded of this fundamental fact through the wintry day as frostbitten producers were seen breaking tank ice, unloading round bales, fixing fence, gathering strays and even dragging lifeless carcasses toward the nearest rendering plant.

Given such grueling and costly chores, the idea of beauty, as well as any pleasing palate of black and blond, can dissipate faster than a short January thaw. Believe me, I'm fully aware of how this bitter-cold winter is steeling the eye of actual cattle ownership. The unforgiving economy of animal husbandry always trumps isolated, albeit inspiring, moments of art appreciation.

Yet it would be misleading to dismiss my brief black-cow survey as stemming from nothing more than scenic in nature. Knowing what I knew about the vital role Angus cattle and crosses had played in herd expansion over the last quarter century, gathering signs of beauty and ongoing production potential somehow went hand in hand.

Of course, black cows have not always been the dynamic wheelhouse of cattle herd growth. Longhorn libido in the wake of the Civil War represented the first bullish catalyst of herd expansion. As the ranching industry spread north and urban beef demand compounded, English breeds became more important building blocks in terms of environmental endurance and meat quality.

There are some cattle historians who like to credit the Hereford cow for winning the West, praising her dependable selfishness in regularly dropping a live calf and getting rebred. I've always thought such thinking was a bit simplistic, yet not entirely beyond logic.

And we all remember the dangerously phony and counterproductive war against fat waged by food scientists and retailers throughout the 1980s. The unscientific linking of better heart health with the consumption of lean beef sounded like sexy sirens to the continental bloodlines of Europe, eventually funding a U.S. slaughter mix long on carcass size and increasingly short on meat quality.

Where were the brave enemies of fake news when we needed them?

As the lean nightmare gradually started to evaporate in the 1990s, black cattle began to assert a new herd dominance, highlighting meat case quality and taste. The uneven march of cow herd numbers between 1990 and 2018 (i.e., three-to-five-year fits and starts of approximately 3 million head) can be characterized as a broken accordion in constant need of repair, yet each time emerging from the shop with a few more black keys.

Put another way, the scrambled pattern of liquidation and expansion (mostly the former) documented since the late 20th century reminds me of an old revolving door in bad need of a grease gun. The liquidation swing side for continental breeds (e.g., Limousin, Chianina, Simmental) pushed easy enough, but the expansion push for black cattle seemed to take more market muscle. Of course, the good news of this inequity has been the growing concentration of blacks within the beef production core.

I certainly don't mean to suggest that the U.S. cattle bloodline is anything close to monolithic. From the Atlantic to the Pacific, more than 70 distinct breeds can be identified. That said, less than 20 breeds make up the majority of the genetics used in this country for commercial beef production. More to the immediate point at hand, a recent survey indicates that at least 60% of commercial ranchers pull yearly calf crops from black or black-based cows.

Personally, I would want the "overs" on any bet in that regard.

Needless to say, after emerging from the economic recession of the last decade, the beef herd has been in expansion gear since 2014. Surely, it goes without saying that black genetics have continued to lead the vanguard. Although USDA enumerators never report annual cattle numbers by breed, in a normal working year, official statisticians should now have the industry fully updated through Jan. 1, 2019.

Unfortunately, the early year government shutdown made "normal" bean counting of this sort as meaningless as the calving rate of Scottish Highlanders.

As you know, last month's nonsensical spit-balling between the White House and Congress forced USDA to take a crowbar to its report calendar, completely eliminating the Jan. 1 Cattle on Feed survey and rescheduling the Cattle Inventory from Jan. 31 to Feb. 28. (Most private analysts now assume official numbers would have confirmed the following changes: on-feed Jan. 1, up 2%; placed in December, up 2%; marketed in December, down 1%.)

Yes, we are facing the possibility of another glitch in the federal time-clock this Friday, yet another open-ended shutdown that might necessitate still further delays in the critical distribution of livestock and meat data.

For what it's worth, I don't think either side wants to go down that expensive and counterproductive road again. At this time, it sounds like some kind of border security deal will be made, one that leaves neither Trump nor Democratic leaders very happy, but at least a sloppy consensus with enough wiggle room to keep government lights turned on for the foreseeable future.

Actually, if there's one cattle report that routinely rolls off Washington's press with a high degree of predictability, it is the Jan. 1 herd count. Barring a major blunder in monthly slaughter data and/or sad examples of math dyslexia, only cross-eyed number-crunchers are likely to completely miss the USDA ballpark.

Specifically, whatever the fickle fate of official enumerators and economists turns out to be through the end of February, the vast majority of beef producers and market watchers now believe that the Jan. 1 herd will eventually be documented around 95 million head, roughly a half percent larger than the start of 2018.

Without a doubt, the rate of expansion is slowing. Yet speeding trains take some time to stop, and the larger calf crops of recent years continue to overshadow accelerating chain speed. My guess is that the 2018 calf crop totaled a bit over 36 million head (i.e., maybe 1% larger than the prior year), enough to marginally offset last year's increases in heifer and cow slaughter.

Finally, I think few serious students of the industry doubt that, given enough time, duly-compensated employees of the ag department will officially mark the Jan. 1 beef cow package as containing approximately 31.8 million pieces, a half percent or so greater than the year before.

Can they be equally confident regarding the color of the additional hides? Maybe not.

All I know is that many late-winter stalks look beautifully familiar to me. 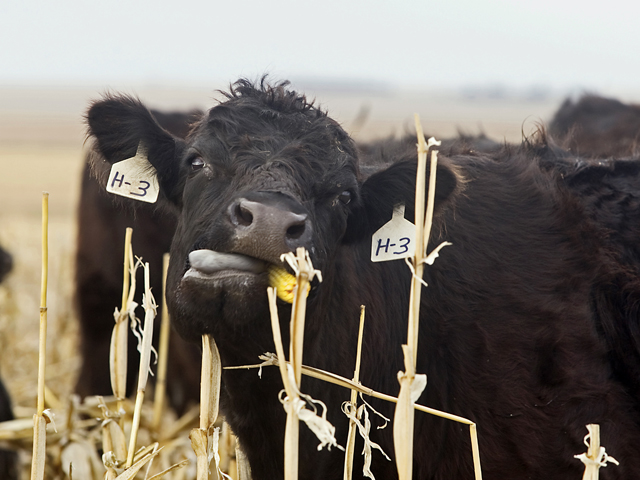