In some ways, a visit to Sedgewood Plantation is like stepping back in time. Towering ancient cedars grace the front lawn of a beautifully restored, 1842 antebellum-style cottage. This has been home to four generations of the Howard family -- most recently Bill and Nancy Howard, and Judy Moyers. The home is on the U.S. National Register of Historic Places and is a Historic Landmark of Mississippi.

It's impressive to see this vestige from the past, but it's not the only thing of historical significance at Sedgewood. There's a pretty special herd of Black Angus cows here, too. These girls' genetics go back to Bill Howard's daddy's herd, from the 1930s. Long-lived and fertile, many in today's commercial herd are more than 15 years old.

A second group of cows, the seedstock herd, is where Bill has doggedly pursued for the past 24 years what he calls "the perfect animal." It's an obsession more than a few cattle folks will understand.

Another emphasis for Bill is biosecurity. Both herds are completely closed to all outside animals today.

"Daddy's herd and ours are different in that he was a commercial cattleman who only brought in bulls. He raised all his own females. So, his herd was closed in the sense that his genetics only came in with the bull," Bill says.

"When we closed our seedstock herd in 2008, that meant we closed it to live outside animals completely. I still want outside genetics. We get that through semen and buying embryos for new females. Those females are our donors for ET [embryo transfer] work in the future."

While genetic progress is key, it is done in a way that allows Bill to feel confident genetics are the only thing he's bringing onto the place. He is so serious about his "no live animals come to the farm" rule that he even keeps a few Jersey cows in the herd, so he can raise his own Jersey teaser bulls. And, if a customer needs to return an animal they buy at Sedgewood, Bill has him take it to the sale barn.

The importance of biosecurity became very clear 20 years ago when Bill says they found anaplasmosis and bovine leukemia virus (BLV) in the herd. With no surrounding cattle, he says it was pretty clear they had introduced the diseases through animals brought onto the farm. So, they set about the long, costly process of testing and culling, a process that went from 1998 to about 2008. Then, after three successive years of 100% negative tests for not only anaplasmosis and BLV, but also Johne's disease, they closed the herd.

"To me, it's a matter of pride," Bill says. "Believe me, we learned this the hard way. In the old days, we'd use the same needle 'til it was too dull or bent. You might go 30 head. Now, we know that's how you spread a disease like anaplasmosis. It's one needle per animal when we work cattle. And, we do that knowing we have a clean herd. Why? Because it's the right way to do things."

On average, the family keeps about 90 commercial cows, 60 registered cows and 30 heifers. They grow out 50 bulls each year. It's a lot of work for three people, a reason Bill says they place great emphasis on disposition and calving ease in the genetic makeup of the herd.

Genetic development here is twofold. There is the emphasis on top-quality bulls, which are sold in an annual public auction at Sedgewood. Along with that is a continued focus on developing high-quality females to be the basis of the operation's growing ET program. After an on-farm training course, Bill and Nancy do all the herd AI (artificial insemination) work. They have a 92% to 94% conception rate on a 60-day calving season that runs through October and November. They breed on natural heats and use the HeatWatch electronic estrus-monitoring system, along with those teaser bulls, to make sure they don't miss a breeding window. They buy sexed semen to increase the size of the bull crop, which has about a 90% success rate.

An embryologist handles the ET program. Bill says they place about 60 embryos each year into commercial recips. Preg-checks are all done using blood tests.

"Literature indicates about a 1% pregnancy loss when you use palpation for preg-checks," he says. "That's money we don't want to lose, so we use the BioPRYN pregnancy blood test."

The traits Bill chooses to emphasize include calving ease, light birthweight, growth and high weaning weights. Add to that docility and carcass quality, and you have something that's getting pretty close to that perfect animal he's looking for.

Emphasizing docility is important, he says, adding "there's no point in having a fine animal if he's going to tear up fences or kill you." But, he notes there's also a management side to docility that's important to emphasize.

"You can take a calm cow and use the Hot-Shot on her every time she's in the chute, and you will make her crazy. You can take a cow that tends to be nervous, handle her easy, and she'll become more relaxed to the point you can work her well," he says.

Bill adds when they AI or vaccinate a cow, she will be in the squeeze chute with a pan of feed in front of her. This is positive reinforcement to enter the chute, and it keeps her distracted while they are breeding or working her. They use thin, disposable, 1 1\2-inch, 20-gauge needles that are almost painless. The cow is so distracted by the food, she hardly notices them. The whole setup is under cover in a barn. So, if it's cold or raining, there's no rush.

"There are no Hot-Shots here. At worst, we might twist a tail. We select for docility. If they're high-strung, they go to the sale barn. Then all we have to do is not mess that up when we work them. It doesn't take any more time to do things the right way; usually, it takes less time if you want to know the truth," Bill notes.

THE BULL SIDE OF THE BUSINESS

The Howards keep the marketing side of the operation focused on bull customers. Bill says they have a lot of longtime buyers, some who have been coming to the farm for more than 20 years. For anyone in the market for a bull, Bill has a few sage thoughts.

First, he says, it's important to look for, and use, EPDs. These can help a commercial producer build the qualities they need into a herd. Second, consider whether the bull will only be used on mature cows or on both cows and heifers. A bull that will be used on mature cows will cost less because calving-ease bulls typically bring a premium of several hundreds of dollars. Third, a producer should factor in how he intends to market the calf crop in choosing a bull.

EPDs can get complicated, but Bill says used correctly, they will help even out a herd. If, for example, a producer sees lower breedback numbers than he'd like, look for a bull with the genetics for moderate milk production. A cow that produces a lot of milk can be harder to breed back because her body condition will tend to drop lower. Also, consider bulls with a higher scrotal circumference. Not only do they breed more cows, but research shows their daughters tend to be more fertile.

Commercial cattlemen who separate heifers from cows can buy a less-expensive bull if he's only going to be used on cows. If the bull will be used on heifers, too, he needs to be a calving-ease bull.

At a time when the industry talks a lot about moderating the size of cattle, Bill says he still has cows that are 1,200 to 1,400 pounds. He needs them to breed the kind of bulls his customers tell him they want.

"Cowboys are cowboys, and you can talk moderation all you want, but they want the biggest bull in the pen," Bill says. "I need a cow that is 1,200 to 1,400 pounds to raise the kind of bull buyers want. When I first got into the registered business, I looked at moderately framed bulls. We were told that larger-framed bulls sold better than moderate-framed bulls, and we found that to be true. So, we breed for thick, muscular bulls and aim for the larger frame score 6. This puts them between the moderate frame score 5 and the really tall frame score 7 bulls."

At 18 months of age, when Sedgewood bulls are sold, Bill says they will weigh 1,500 to 1,600 pounds. Weaning weights typically run 650 to 750 pounds without creep feed. While these are big bulls, they are also conditioned. Bill doesn't confine them to small enclosures. They run in a large pasture and are fed daily to keep them growing, so they are large enough to go into service when sold.

For supplemental feed, Bill uses commodities, including dried distillers grains (DDGs) and gin motes. They buy motes in the summer when prices are the lowest and store them in a commodity barn. The gin mote is the cotton extracted by the lint cleaner. It is a relatively high-fiber, low-energy feed, usually given in loose form. While nutritional values vary, it usually rates 45 to 50% in total digestible nutrients (TDN) and 7 to 9% crude protein (CP). Ground corn is added to the feed to provide the energy needed for 3 pounds of average daily gain.

Prior to the annual spring sale, all of Sedgewood's bulls are given breeding soundness exams. They are all DNA-tested to make sure the EPDs provided are as accurate as possible. The bulls are short-haired and slick off at the end of winter. Bill stresses on sale day the bulls are never trimmed. Buyers see them just as they are.

The sale has become a well-known event in the area, and like most things, Bill has come up with a pretty organized system for the once-a-year auction.

"No bulls are sold out of the calf crop before the sale," he says. "This way everyone has a chance to get first pick on the bulls. Our goal is for everyone to get the bull they want and go home happy." 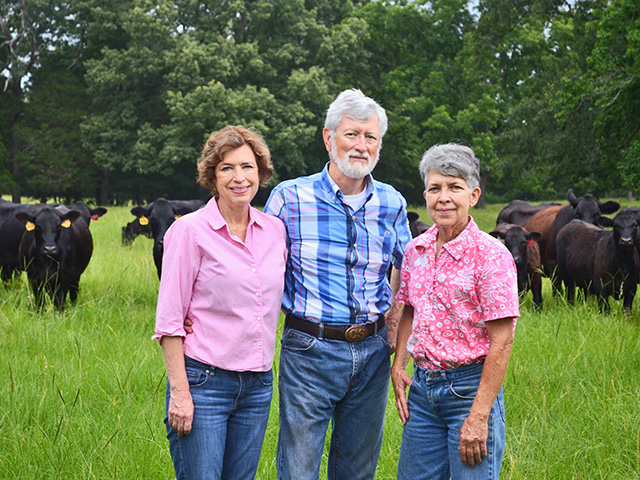