There are two ways to get a really good herd of cows. If your pockets are deep enough, you buy a lot of great females all at one time. Your job at that point is to avoid messing them up. The other way is to continually reinvest profits into expansion and improvement for tomorrow. It's slow. It's thoughtful. And, it works for Tennessee's Woolfolk family.

Roll the clock back to 1941, when W.W. Woolfolk brought home the farm's first registered Hereford heifer, Annie Domino K. He bought her from a neighbor, Fred Exum. That heifer is still remembered generations later as having helped the family build a registered herd. They've held a commitment to the Hereford breed since then and, today, carry about 115 cows in their registered herd, just outside of Jackson.

"We don't bring in a lot of outside genetics," says Johnny Woolfolk, the fourth generation to work this century farm. "We have about 60 commercial recip cows, and even there, we use our own embryos."

He shares that about 10 years ago, Woolfolk Farms was faced with a decision. It needed to expand the crop side of the operation, growing more cotton, corn, soybeans and wheat—and investing in larger, newer machinery. Or, the family needed to find a way to make more income off of every cow. They opted to grow the hay and livestock side of the farm.

Scott Woolfolk, fifth generation in the family business, says a seedstock herd was the only way to meet their goals. "The main thing we stay focused on is genetic quality," he notes. "We've got bulls in 13 states now, from the Mexican border to New York. Most of our buyers are commercial producers, and they are looking for meat, muscle, soundness and docility. Of those, today I'd say soundness and docility are the most critical."

Among commercial producers, Hereford bulls are a favorite, used on Angus cow herds to produce the ever-popular crossbred black baldy. That drive for heterosis found in crossbred herds is the closest thing producers will ever get to a free lunch in the beef business.

"The baldy is the No. 1 breed of cattle in the world that isn't a breed," Scott says. "We stay focused on making sure that the bull side of that equation is bringing everything he needs to bring to the herd."

Docility is an especially important trait among Hereford breeders, Scott adds. More than easy handling, docility in a cow herd has been shown to have a direct connection to conception rates.

Reinaldo Cooke, associate professor of beef cattle production at Texas A&M, has spent a lot of his research career focused on cattle temperament and how it impacts profitability in cow/calf operations.

"We started looking at this in Florida," he says. "At the time, there was a conversation about the importance of temperament in terms of gain and efficiency on feedlot cattle. A few reports indicated that those feedlot cattle with more aggressive dispositions ate less and gained less."

Cooke began to take those ideas and transfer them to the production side. As he did research, he noticed reproduction efficiency was impaired in cattle with what could be described as aggressive dispositions. He started looking at Bos taurus/Bos indicus crosses in Florida; then, took his work to the Pacific Northwest, where he studied Bos taurus breeds like Angus and Angus crosses.

The researcher noted when it came to poor dispositions, the biggest downside for cow/calf producers was seen in lower conception rates in both AI (artificial insemination) and natural breeding programs. "Usually, those cows are able to raise calves as good as those with a calmer disposition," he notes. "But, in the end, there are fewer calves to sell off of them, so the overall return is lower."

He adds because disposition is heritable, keeping a cow with a bad one means there's about a 50% chance her heifer or bull calf will also have temperament problems. "Excitable temperament has detrimental effects on reproduction in beef females independent of breed," he explains. He says the nutritional status of excitable cattle is often impacted due to decreased feed intake and, perhaps, a direct relationship among genes that control disposition and reproductive functions.

"Hormones produced during a stress response, particularly cortisol, disrupt physiological mechanisms that regulate reproduction in beef females, such as ovulation, conception and establishment of pregnancy," he says. Cooke notes a clear disposition difference between Bos indicus and Bos taurus breeds.

"With Bos indicus, there is a tendency more to the aggressive side on the whole. On the Bos taurus side, we see a little bit of everything. You have Angus cows that act crazy, same with the Hereford or the Simmental. Within the breeds, I really can't point to one breed and say it's better or worse. It becomes more about the breeder at that point."

Johnny Woolfolk, a past-president of the American Hereford Association, agrees and says it's important for commercial cattlemen to research breeders, as well as to understand breed indexes and have a plan for how best to genetically move their own herds forward before investing in a new bull or new females.

All registered Hereford calves come from bulls with GE-EPDs (genetically enhanced expected progeny differences). At its most basic level, this means before a calf is ever on the ground, an unproven bull with a GE-EPD has the same amount of accuracy for a trait as if it had, on average, 15 progeny records to glean information from.

Scott Woolfolk says every producer's needs and goals will vary regarding what they want for a herd. "What they want, and what they are mating that bull to, what their future end result should be … that's what's important," he says. "We try to have a bull for every kind of customer. Low birthweight. High maternal. Some polled, some not. There is no wrong answer, because every herd and every herd owner is different."

This year, Scott notes they will have their annual bull and female sale Feb. 23 at the Columbia Livestock Center, in Columbia. He expects to sell 40 bulls and 25 female lots, mostly bred heifers and some cows.

A LITTLE ATTITUDE IS GOOD

If docility is a positive reproductive trait, is it possible to overemphasize it? Like any trait, there can be too much of a good thing. Cooke notes there is simply a point where too much docility creates its own set of problems.

"Cattle are supposed to be able to survive in harsh environments," he says. "It is clear to me, especially in areas where there are predators, that selecting cows to be extremely docile can create problems. Sometimes, they are so docile they may not properly care for their offspring." He notes there is anecdotal research that shows in areas where wolves are predators, cows that come back without a calf often have a very docile disposition. Those with more aggressive dispositions tend to have their calf next to them when they come in from a summer of grazing.

"I think it's important to have a little disposition left in that animal," he adds. "It carries over to the feedlot. An extremely docile animal may be bullied. They have to have some disposition to fight for bunk space and water."

Along with genetics, Cooke says low-stress handling at a certain point in an animal's life benefits reproduction by adapting them to handling.

Cooke notes the process of acclimating heifers means exposure for four weeks to human handling three times a week. Nonacclimated heifers were undisturbed on pasture. He adds no major improvements in temperament and reproduction were detected when mature cows were exposed to acclimation.

While management and low-stress handling make a measurable difference regarding docility, Cooke stresses the most important thing a producer can do is emphasize culling and buy cattle with an eye toward temperament.

"Including temperament in culling and selection criteria might be the most appropriate alternative to improve the overall temperament and consequent reproductive performance of the adult cow herd," he stresses.

Scott Woolfolk adds there are also day-to-day advantages to building a good disposition into the average producer's herd.

"Docility is important to cattlemen everywhere. When you come to our farm, you're looking at the workforce for the most part -- it's us. We don't have time to deal with a wild animal. We like that lightweight panels and gates are good enough for Hereford cows and Hereford bulls. It's just one less thing to worry about." 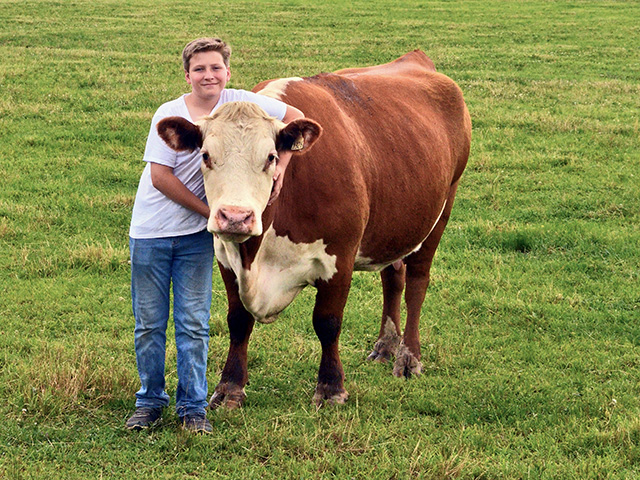