When Reiss and Heather Bruning wanted to move a generations-old operation from a long tradition of private treaty sales to public auction, they found it easier to ask for forgiveness than permission.

"We lined it all up, told them the sale date and hoped everything would work out the way we wanted it to," Reiss recalls. It pretty much has. That first public auction was in 2015, and since then, Reiss said it's taken Bruning Farms to a place private treaty sales didn't.

The young couple marks the fifth generation of Brunings to raise cattle here. Four Bruning brothers settled in this part of Nebraska in 1887, which today is aptly known as "Bruning." It's located about an hour outside of Lincoln.

The youngest brother, Frank, started with 320 acres. He loved livestock and racehorses. His son, Fred, added a feedlot in the 1930s. Today, the matriarch, Mary, and patriarch, Frank, still set the standards at Bruning Farms, holding up values and a traditional way of life as an example to their children and grandchildren.

Reiss and Heather, who married in 2016, embrace the traditions. But, they are also bringing new technology and improved genetics to the Black Angus operation. They produce both registered and commercial animals, selling females and bulls in a once-a-year public auction. Making that shift from selling essentially year-round through private treaty to once a year has taken time and focus, but it's brought its own set of rewards.

"We have customers from a wider geographic area, and we have stronger repeat business," Reiss noted. "It's also helped us know what our customers really value, so we can be in a better position to meet those needs."

Public sales essentially let the customers set values of individual animals. Putting a price tag on cattle is something Reiss admits he, as a producer, struggled with in the private-treaty environment. While they knew what it took to break even, it was impossible to know the value of genetics to every customer. Essentially, everyone wants something a little different.

"In the public auction world, the customer tells us what those genetics are worth," Reiss said. "We don't set the value; they do. We are comfortable with that."

Bruning Farms focuses on both carcass and maternal traits in the commercial and registered herds. Dependent on forages, which are mostly native grasses, the operation carries around 500 cows. Of those 350 are registered Black Angus; 150 are commercial.

"We aim for the higher-end product, greater marbling and substantial carcass weights in both herds," Reiss explains. "We also want efficient animals that keep flesh on year-round."

The Brunings have a unique vantage point when it comes to being able to see the process from start to finish. In addition to the cow/calf side of the operation, they feed out 400 head between October and May. It's a chance to see how Bruning genetics are stacking up where the end product lies. Using this information, Reiss said they aim to help producers improve consistency and quality of their own beef through good genetic decisions. Last year, their cattle graded 98.81% Choice or higher, and 19.23% Prime.

"We want to help everyone get premiums and continue to improve the overall reputation of U.S. beef," Heather said. "What we're doing is as much about that as it is about our own business."

Reiss added he only sells cattle he'd keep in his own herd. On the maternal side, that means a moderate 1,400-pound female that can raise a good calf. She needs to bring a good marbling score, too, because she's the other half of the equation.

On the bull side, Reiss noted he sorts backward from most.

"I start by weeding out bulls based on carcass data and those that don't have accurate EPDs," he said. "Then, I narrow based on progeny, females and reproduction, as well as frame size and mature weights. Quick growth is important to me, especially earlier. Faster early growth means fewer days on feed and more pounds sold at weaning. It also means less intake at the feedlot."

All of the Brunings' seedstock cattle sell with full genomic-enhanced (GE) EPDs and ultrasound carcass data. Reiss also tracks daily gains and pairs that from time weaned till the printing of the sale catalog for the auction. On bulls, he provides scrotal circumference measurements and a first-year breeding guarantee. He also offers something unique in the business: a six-month guarantee of docility on bulls.

"I don't put up with bad attitudes and poor dispositions," he said. "If something happens in the first six months that changes that bull after he leaves here, I'll replace him."

While the Brunings note customers can get as specific as they want on trait data, they include 12 measurements with every bull and every female in their annual sales catalog: calving ease direct (CED), birthweight (BW), weaning weight (WW), yearling weight (YW), milking ability (MA), an Angus index for cow energy value ($EN), marbling (MARB), rib-eye area (RE) and the Angus indexes for weaned calf value ($W), feedlot value ($F), grid value ($G) and beef value ($B).

Preparing to sell at an annual auction instead of year-round required a shift in the Brunings' breeding program. Reiss, an animal science major from Kansas State University, worked to maintain both a fall- and a spring-calving season, each around 60 days in length.

He artificially inseminates (AI) the herd using an MGA-based (melengestrol acetate) synchronization system for heifers and a seven-day CIDR (controlled internal drug release) protocol for cows. He sees 75 to 80% conception rates on cows with one AI; on heifers, the rate is 65 to 70%.

Reiss said he's saving time on this side of the operation thanks to his use of some new technology, Allflex SenseTime Beef electronic ear tags. The tags are used on a portion of his spring herd, the registered heifers. The tags have been catching silent heats and have helped him get more heifers bred in a shorter amount of time.

"Before we started using these tags, I set up our lots as they calved, generally about 40 per pen," he noted. "I'd set them up one pen at a time, and they would get bred week by week. Now, I take two pens of 40 and set them up at the same time. I don't have to pull cows off or write tag numbers down. The system will let me know the best time to AI. I get twice as much done in a week this way." He admits it has taken him time to build up trust in the technology.

"You get used to the cows, and you think you know them and can tell when they are in estrus. The Allflex system shows standing heats and breeding windows, and it makes you double-check your intuition at times."

He explains there are times the Allflex system puts the breeding window 12 to 20 hours past when he would normally AI on a standing heat.

"I really didn't trust it at first. I'd see she was in standing heat, and I'd think it was time to breed her. But, after I went with the recommendation from the system a few times, I learned I could rely on it," he said.

Reiss added he hopes he can eventually skip CIDR synchronization on his cows and use the Allflex system to select the breeding windows.

"To do a one-shot protocol and eliminate the number of times we have to run a cow through the chute, that would be great," he said. "We're really interested to see how it works. Because not only does this help the cow, but it will reduce the stress on those newborn calves. Just an hour away from their dam really stresses them."

Like every good cattle operation, Reiss and Heather say Bruning Farms is focused on more than the day-to-day business of raising beef. Aside from the technology and the genetics, there's a simpler priority at work in this operation.

"This is about trying to raise better beef as an industry," Heather said. "Our slogan is 'Breed Better Beef,' and no matter what part of the industry you are in, better beef gives you more ways to be successful."

Reiss agreed. "Some people feed calves; some just raise calves. We do both. We want to be that seedstock supplier that bridges those two worlds. That's what we're in this to accomplish." 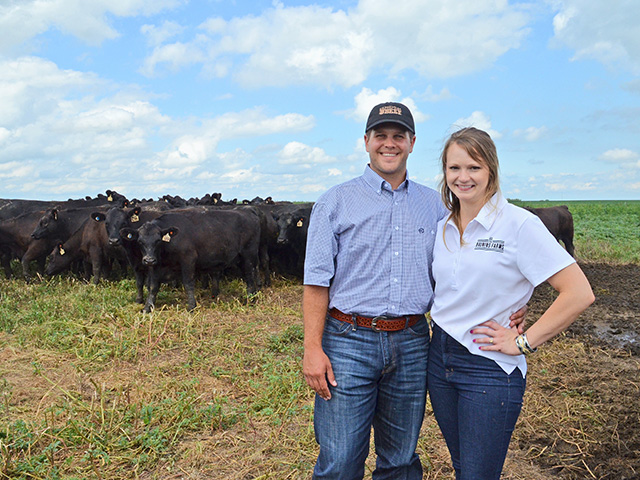