When calf prices are sky high, creep feeding often comes down to simple math. As the market trends down, however, it's an iffier proposition—unless the motivation is more than economic. For cattleman Lindy Sheppard, the practice is about filling in forage gaps for a select group of fall-born calves.

The Sylvania, Georgia, cattleman plans for winter grazing on pasture he owns, normally using forage oats. But, that ground is only about half of what he needs for his 250-head cow herd. The rest of the pasture he winters the herd on is rented, normally consisting of dormant bermudagrass or bahiagrass.

He works around the challenge by putting first-calf heifers on the rented pastures and supplementing the new mothers, as well as their calves, beginning in late January. The calves, born in September and October, will weigh 350 to 450 pounds by this time. In addition to the creep feed, they have access to free choice grass hay and limited peanut hay.

A local feed dealer fills Sheppard's 2-ton creep feeder with a pelleted 12% crude protein mix of 60% soy hulls and 40% corn gluten feed. The cattleman estimates calves eat around 1% of their body weight each day. By the time bull calves are weaned in April (550 to 750 pounds), and heifers and steers are weaned in June (650 to 700 pounds), he estimates they've consumed 5 to 6 pounds of creep feed per day. Those weights are about the same as the calves from mature cows, which he doesn't creep feed but have access to forage oats for winter grazing.

Sheppard works to maximize values on those first-calf heifers, which are registered Angus or SimAngus. Some 50 to 60% of their calves are AI sired. Bull calves sell as potential sires; heifer calves are used as replacements; steers are preconditioned after weaning and marketed in a video sale. Even with all those value-added outlets, Sheppard says most years, creep feeding is just a break-even proposition.

John Callaway says the economic scales tilted away from creep feeding on his operation, as he converted from bermudagrass hay to ryegrass baleage.

"If the baleage is good enough, we've found it is a good substitute for traditional creep feeding," the Hogansville, Georgia, cattleman says. He adds that while ryegrass is still growing, he may set up a creep gate so only the calves can graze.

Like Sheppard, Callaway sells the majority of his male calves as bulls and keeps heifers for his own herd, or sells them as replacements to other producers.

Trying to decide if creep feeding goes in the profit or the loss column is a year-to-year, operation-to-operation decision.

University of Arkansas animal scientist Shane Gadberry says both pasture condition and current market price for calves affect breakevens for the practice. In fact, the better the pasture, the less likely creep feeding will be a positive strategy.

"First, get a handle on current forage and pasture conditions, both the quality and abundance. Under very good pasture conditions, feed conversion will be low or poor. It takes a lot of feed to put on extra pounds of gain," he explains. "But if you're in a drought or your pastures are low quality, like unfertilized native grasses or warm-season grasses in late fall, feed conversion can be very good. You might see 4 to 6 pounds of feed per pound of gain."

Next, consider market incentives, Gadberry says. At current prices, what is it worth to add 50 pounds to a calf? Is the value of gain worth more than the cost of the supplemental feed to get that gain?

Considering Arkansas prices for feeder calves, he says if pastures are poor, and feed costs $240 a ton, you can creep-feed for less than the value of gain. If the cattle are on wheat, ryegrass or nontoxic fescue, creep feed will need to be less than $130 a ton to break even. He bases these figures on a 550-pound calf selling for $1.40 per pound.

Gadberry adds creep feeding can have negative consequences, even when the value of gain seems favorable.

"If you sell at the sale barn, make sure calves don't get too fleshy. They'll get discounted," he says, adding that females exposed to creep feed have lower milk production as first-calf heifers.

The Arkansas animal scientist also notes the strategy of creep feeding calves from first-calf heifers to help their dams doesn't work for every producer.

"The calf always wants to nurse. If creep feeding does anything, it affects pasture intake. So it may be a slight benefit for the pasture. Early weaning is the only thing that truly helps the cow," he says.

If pasture conditions and the market do point toward a positive return from creep feeding, Gadberry recommends putting feeders in the pasture 60 to 90 days before weaning, assuming calves are weaned at an average of 7 months of age. At that time, he explains, growth rate of the calf is influenced more by feed than milk intake.

If the main reason for creep feeding is to ease calves' stress at weaning, he says feeding time can be reduced to 30 to 45 days.

"It does make for an easier transition for them when we wean," cattleman Sheppard says. "They are bunk broke, and their system is used to the feed." Still, unless it is the calves from the first-calf heifers, and they have no winter grazing, he normally skips that step.

Focus On Goals. When it comes to rations, Gadberry says they should be goal driven.

"If you want higher gains, you probably want to feed 1% of body weight with a balance of protein and energy. If you are creep feeding to make up for a deficiency in forage, such as protein, you probably want to feed at the rate of 0.5% of body weight or less." He says that can be a protein meal base with a limiter, such as salt, to prevent excessive intake. 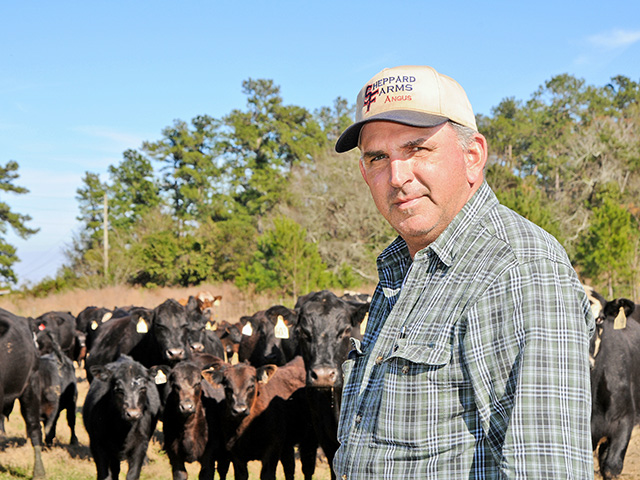