Thomas Glascock got an early start as a premier beef breeder. His grandparents gave him a purebred Red Angus heifer as a birthday gift when he was just 6 years old. By the time he was a third-grader, the granddaughter from that first heifer won the "Triple Crown" of stock shows, being named Junior Grand Champion Female in Fort Worth, San Antonio and Houston. Glascock was hooked on cattle.

Now 24 years old, the cattleman manages 125 head of cows, bred heifers and replacements—all still going back to that original Red Angus heifer. The herd today is based at Timber Creek Ranch, an 800-acre family operation in Marietta, Oklahoma.

Glascock is focused on building quality and production value in this herd, where the average age of cow is 7. He sees this as a time of transition and opportunity.

"Instead of having more head of cattle, I'm stepping back a little and putting the emphasis on improved quality," he explains. "I'm being much more selective

on genotype and phenotype, using technologies like embryo transfer and AI [artificial insemination] work. The goal is that in the next five to 10 years, I'll be back to increasing herd size and in a position to have my own production sale with top-quality animals."

Specifically, Glascock wants to moderate cow size, noting frames have gotten too big. He's also looking for improved carcass traits. All the while, he's sticking to one simple key for this seedstock herd—functional females that do well on limited inputs like prairie grass and Coastal bermudagrass. He's even working with the Noble Research Institute, out of Ardmore, Oklahoma, as a cooperator to learn ways to improve both forage and herd management.

"I need cows that can survive on minimal inputs and be very efficient," he stresses. "They need to have a calf every 365 days. They need to grow a good calf.

They need all those things you want in a cow. I call it cowboy logic."

BUILDING BLOCKS. His cowboy logic comes thanks to generations of mentors who have encouraged him along the way.

Glascock says he was born to be in the cattle business. Raised near Pilot Point, Texas, his mother, Tammy Glascock, and dad, Randy Glascock, were agricultural science teachers. He spent weekends and summers on the family ranch helping his grandfather, T. J. Davidson (he calls him "Pop"), and his grandmother, Joy. Pop gave him a few more heifers over the years, and Thomas bought some on his own as he could manage. By the time he was a freshman in high school, he had 100 cows.

"Pop taught me the value of hard work and integrity," he says. "Mom and Dad were my agricultural teachers. They taught me the basics of agriculture and leadership, and still continue to provide encouragement and support."

He followed his sister, Rachel Gray, into the Future Farmers of America (FFA) organization. Glascock earned the Lone Star FFA Degree and was named American Star Farmer in 2015.

"Rachel was a FFA officer, and I guess that's one reason I wanted to get involved. There were so many people along the way I wanted to be like. They helped me see what I had to do to reach my goals. They are still helping me."

One other way FFA played a critical role in his future was at the Texas convention where he met Madison, his wife.

QUALITY UNDERNEATH. Glascock attended Tarleton State University, in Stephenville, Texas, graduating in August 2016 with a degree in animal science. He is now at the University of Arkansas pursuing a master's degree in animal science with an emphasis in meat science. Being exposed to the meat-science area of the beef industry has opened his eyes to how key a role seedstock producers play, from commercial operation to consumer.

"If you're going to be in the seedstock business, the animals you produce have got to be the best they can," Glascock explains. "We set the quality that goes from that commercial producer all the way to what hangs on the rail. The animal is not just what you see. There has to be quality underneath the hide. I want to have that ultimate, complete package—an animal that is efficient for the producer and can go to the rail and hang at least Choice."

The genetic strides necessary to make that happen at Timber Creek are coming from high-performance bulls and embryo transfer. Females are artificially inseminated first, with conception rates between 75 and 80%. Cleanup bulls are used next. A small commercial herd is used for embryo transfers. This year, Glascock says they will implant 15 to 20 embryos. Those cows are also turned out with a cleanup bull.

As a measure of his success, Glascock is selling yearling bulls and bred heifers to breeders throughout the U.S. and into Canada. While he doesn't give specifics on price, he notes both the bull and heifer markets are down slightly this year. But, he adds, people are still buying cattle and growing herds. Genetics are key, he says, adding that for him, efficiency and functionality are equally important.

"Dr. Jason Sawyer, in the Tarleton State University Meat Science Laboratory, opened my eyes to the value of what quality looks like under the hide," Glascock says. "He showed me the importance of using high-end genetics."

FUTURE GOALS. For this producer, the Red Angus breed is hard to beat in his part of the world. He exhibits cattle every year in Denver, Fort Worth and at the Dixie National Livestock Show, in Jackson, Mississippi. In addition to garnering championship banners, he has sold several high-dollar bulls and heifers at these shows.

"Red Angus do well in this country and are heat tolerant, have good maternal traits and are highly efficient," Glascock notes. "We don't pamper our cows. Grass and water is about all they need, except for some hay and liquid supplement in the winter and during dry spells. I don't chase fads. I want large-bodied females with sound legs and udders that produce a calf every year."

That level of leadership at such a young age gave Glascock an opportunity to meet producers across the country—he's been to 43 states and Canada attending stock shows, conventions and Red Angus events.

Those experiences are something he carries with him every day.

"For me, there's nothing better," he says. "I love hopping in the truck and going to a meeting, and visiting these successful producers and learning from their programs. To shake their hands and learn from them is one of the greatest things about this industry." 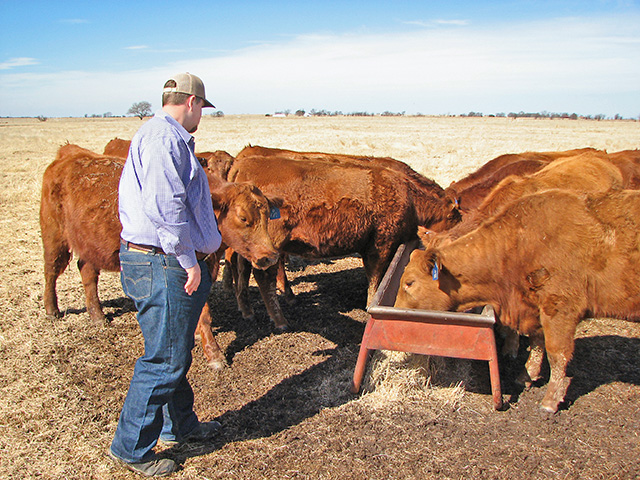