Cattlemen are a fiercely independent lot. Different focuses and philosophies often tied to a production system or even a cattle breed can limit common ground. But, solidarity rules when it comes to the issue of fake meat.

Joel Salatin sees this growing product niche as a threat to agriculture and a call for farmers to do more in their local communities.

"I think these products will push farmers to tell their stories better," the well-known Virginia farmer believes. "New competition from the antimeat crowd simply puts more of an onus on us to explain the benefits, both nutritionally and ecologically, of domestic livestock raised well."

Salatin calls himself a "Christian, libertarian, environmentalist, capitalist, lunatic farmer." Based in the Shenandoah Valley, his family operation, Polyface Farms, provides beef for more than 5,000 families, 50 restaurants, 10 retail outlets and a farmers' market. Salatin's operation is a template for direct marketing and the use of diversification and grass-based organic methods to grow both crops and livestock.

Ask Salatin if the new "bleeding," plant-based protein burgers are healthier than traditional beef, and his answer can be a little hard to wring out. He is not, after all, a fan of today's predominant production system for beef.

"Even while our current tradition of producing meat is horrendous, it's better than a meatless diet," he says. "If we produce meat in a pasture-based, exercise-encouraging, sunshine-bathed, clean-air environment, then the answer to the question is without equivocation. Otherwise, it requires a little stutter."

Fake meat is no longer a veggie burger in the freezer section of the local supermarket. It's now meant to rival the real deal, even appearing to bleed like a medium-rare burger.

Beyond Meat is a leader in the market niche, with sales at retail and restaurant levels. Another player, Impossible Foods, produces a burger sold only in restaurants. But, it is expected to expand into the retail space soon.

Will Schafer, vice president of marketing for Beyond Meat, says the Beyond Burger was their first raw product. "It was developed to look, cook and satisfy exactly like its animal equivalent, a beef burger," he says. "We've had success in selling it into the meat case at a number of major conventional retailers, because it delivers on the hallmark taste, texture and appearance of traditional meat. With each new product … we are getting closer and closer to perfectly building meat directly from plants."

Websites of both companies claim their products to be planet-saving and sustainable. Both products use the word "meat" on websites and labels. It's just that word choice that's creating pushback from livestock groups such as the National Cattlemen's Beef Association (NCBA).

REGULATING IN A NEW WORLD

Danielle Beck, director of government affairs for NCBA, notes there are two distinct product groups when it comes to fake meats. There are plant-based proteins, most of which currently fall under the FDA's authority; and there are the not-yet-to-market lab-grown products.

"The regulatory framework for the lab-grown proteins has yet to be determined," she says. "We believe the existing law is clear, and USDA should have authority over those products. We have to maintain that, because it's the only way we are going to have a level playing field."

Despite their insistence that lab-grown products are actual meat, stakeholders continue to push for the FDA to have regulatory authority over them. Beck believes it's because they don't want to face the same inspection and regulatory environment U.S. farmers do.

"The USDA, when it comes to labeling, has a mandatory preapproval process," she says. "That is a powerful regulatory tool. There's also continuous inspection and other steps to ensure consumer safety. The FDA doesn't look at labels before they enter the market, and they only move to enforcement if they believe labels are misbranded or in violation."

Based on recent hearings, the FDA doesn't appear ready to step aside. In July, DTN Ag Policy Editor Chris Clayton reported there was a turf battle as lab-grown products moved closer to the marketplace.

"These are still early days, but make no mistake, FDA has been preparing for this for quite some time," explained Susan Mayne at a hearing to discuss the issue. She is the agency's director of the Center for Food Safety and Applied Nutrition. "This is not our first rodeo, so to speak. We have multiple authorities and programs that can support efforts to bring products with new ingredients in the market."

Livestock producers in Missouri aren't taking any chances. The Missouri Cattlemen's Association has helped move a bill through the state that regulates labels. Mike Deering says he hopes, as more states take similar actions, the USDA will be encouraged to come down on the right side of the issue. The Missouri law, which, in part, says it "prohibits misrepresenting a product as meat that is not derived from harvested production livestock or poultry," is already in effect. At press time, Montana was seeking signatures on a petition for a similar rule, and other states were expected to follow.

Deering, executive vice president of the state association, says they want to be sure both the current plant-based products and the coming lab-grown products are properly marketed and regulated.

"We are asking the USDA to work with the FDA to enforce existing labeling laws for plant-based protein products. The FDA has the power to take action against products that use misleading labels to confuse consumers about the true nature of their products. Unfortunately, the FDA has a track record of lax enforcement on food-labeling issues," he says.

Deering adds they believe these products should all be held to the same level of scrutiny as products farmers and ranchers raise.

"We want to make it clear that companies marketing laboratory-grown or plant-based food products will do so with integrity. We are not against these products, but we will not tolerate them being marketed in such a way that they mislead consumers or weaken the value of the products our farm and ranch families work hard to produce. I like to call what we've done in Missouri an honesty law, not a labeling law. If it's not meat, don't call it that. If it comes from a plant, put a picture of a plant on the package, not a picture of a cow. If it was grown in a petri dish, be honest about that. It's that simple."

Beyond Meat's Schafer insists the company is "staunchly in favor of truth and transparency in labeling." He says Beyond Meat does not misrepresent its plant-based products as meat-derived.

The marshaling of forces in the livestock industry against these products may seem strong considering they took just 2% of meat case sales in 2017. But, currently available plant-based products saw an 8% growth in sales during the last year.

One needs to look no further than the dairy industry to see how lax labeling rule enforcement and a growing array of product can squeeze retail space in an area once exclusively the domain of the "Got Milk?" crowd.

An online report from Mintel, a global marketing intelligence agency that tracks product launches, shows sales in the nondairy milk category have grown 61% since 2012. That's an estimated $2.11 billion in 2017 sales. Almond dominates (64%), followed by soy (13%) and coconut (12%). Overall sales in the dairy milk category are down 15% during the same period, with $16.12 billion spent in 2017.

Bill Bullard is convinced the fake-meat products can do the same damage to the beef industry the nondairy products have done to that group. The head of R-CALF USA says none of these products should be called meat. He refers to lab-grown product as "offensive." "It's just common sense that the consumer should be afforded full transparency in knowing the origins of that product," he says, adding that reinstating Country of Origin Labeling, a subject close to the hearts of R-CALF members, would be a step toward helping U.S. beef stand out in the growing competitive environment.

"If I could get every livestock producer to write down a list of things keeping them up nights, these products probably wouldn't make the list," he says. "The issue is that the makers of these products want to be represented in the marketplace as an equal, and they want to compete with conventionally produced proteins; but, they don't want the same regulatory burdens as those conventional proteins. They want to have their cake and eat it, too. In the case of lab-based proteins, especially, my bias is they end up at USDA."

Close thinks makers of plant-based and lab-grown proteins are miscalculating their future market.

"If you listen to proponents of these products, they describe what they see as primary buyers, and they think they are talking about highly mobile, highly educated millennials. I argue against that. The people buying into the concept today are as fickle as a 10-year-old. By the time lab-grown products are commercially viable, that group will be on to the next greatest thing."

Close does believe there could be incredible opportunity in the 300-million-strong middle class in China and other parts of Southeastern Asia. "There will be an emerging customer base, but it won't be the high-end target a lot of people think it will be."

Close's comments fall in line with thoughts Bill Gates, an investor in both types of products, has shared through his blog. He says, "we need more options for producing meat without depleting our resources." And, while he notes he isn't planning on giving up one of his favorite foods, hamburger, he believes plant-based alternatives to chicken, ground beef and even eggs are produced more sustainably.

Sustainability is a word associated with fake meats. It implies the production processes will use less land, water, energy, and be better for the environment. It's an argument without publicly available, decisive, real-world metrics behind it. And, it's one Texas cattleman Don Davis flatly rejects.

Davis is vice president of the American Grassfed Association, a group of producers who subscribe to regenerative agricultural production methods as a way to restore and improve land using animals. He also raises Longhorn cattle on his ranch, DWD Longhorns, in Tarpley. Davis says the argument that cattle are bad for the environment is all wrong.

"Yes, you can mismanage livestock—let's get that straight. But, if you're following holistic, or [Allan] Savory, management practices, you will actually regenerate the land using livestock. They are a tool to better the environment, not to tear it down."

He says, "sustainability" is a term people throw around without much real meaning. "Your vision of sustainability can include as much or as little of the production process as you want it to. You ignore the rest. To be accurate, you have to consider all the fossil fuels that went into that end product all the way back to the plowing and planting. In most cases, things like this aren't being accounted for in sustainability equations when we talk about fake meats. I absolutely believe grass-fed beef is superior to any fake made product. It's superior nutritionally. It's superior from a sustainability standpoint."

Davis also has an issue with the lab-grown products' marketing terminology, claiming the title "clean meat." "I don't know what they mean by clean meat. The real implication here is that real meat is dirty. I object to that."

Joel Salatin has plenty of his own objections to add to the discussion.

"The lab-grown meat substitute will not have the full spectrum of nutrition the real thing does any more than hydroponic vegetables carry the same level of nutrition as those grown in healthy soil," he believes.

"This is ultimately a mechanical view of life, rather than a biological one. Nature's template of moving, mobbing and mowing as a herbivore function cannot be abrogated or terminated by clever lab technicians. Instead of disrespecting nature's template, how about we respect it and use our innovative genius and creativity to caress it more rather than conquistador it." 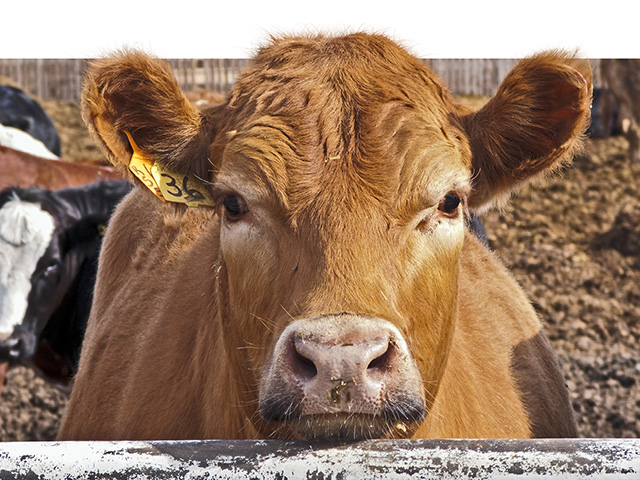