For most cattle producers, hay is the go-to feed during those long winter months. This year, however, many commodity-based feed ingredients may seem like a bargain compared to those big, round bales. The key to adding pounds and maintaining body condition at the lowest possible price point is building the right mix to take advantage of local markets for byproducts and seasonal price lows.

Since most cow/calf producers are concerned with wintering females and having them in good condition to breed come spring, the focus is on body condition going into the winter season. Gestating cows in excellent condition may need only mineral and vitamin supplementation. Thin cows, however, need good-quality forage and/or high-energy supplements (plus-70% total digestible nutrients, or TDN), and protein (15 to 30%), as well as the aforementioned mineral and vitamins. A herd nutritionist, or veterinarian, is an invaluable asset to help build the right mix for each situation.

Looking at some of the most common feeds as fall and winter months approach, it appears producers can be optimistic that at least portions of their feed bills will be flat to slightly down compared to last year.

Depending on the cattle-production stage, corn has been a gold standard for feed for generations. There are many options when it comes to this source, from cracked corn to distillers grains (DG) to corn gluten feed (CGF), wet and pelleted.

With a sixth-consecutive good year for corn at hand, DTN grains analyst Todd Hultman says corn supplies are going to be hefty. Ending stocks on old crop are estimated at 2.1 billion bushels, with this year's crop projected at 14.3 to 14.5 billion bushels. Seasonal price lows normally occur around October.

December corn futures prices hit their high in late May, at around $4.29 per bushel. Those highs were helped along by concerns about dry weather in Brazil. A significant price correction followed based on good U.S. growing conditions. "We saw a steep drop after that high to $3.59 per bushel," Hultman notes.

Prices this fall won't likely go as low as they did in 2017, because of a significant increase in world corn use and drought in Argentina. "Globally, we will see a significant drop in ending corn supplies for the second year in a row," Hultman says. "That will give us some price support."

Last year, corn futures dropped to $3.35 per bushel; this year, $3.50 is a more likely floor, the analyst believes.

At press time, DGs were trading around $125 to $145 per ton (University of Missouri), and CGF (pelleted), $145 to $187 per ton. As corn prices drop toward the end of the year, there would likely be modest declines in these products, as well.

For those producers lucky enough to be within shipping distance of a gin, it's a well-known fact that cottonseed and cottonseed meal are excellent sources of protein and fat for cattle. Cow/calf producers should not overfeed cottonseed-based products, however, as gossypol levels can impact reproductive performance in some animals.

Grady Ferguson, ag commodity market analyst for Informa Economics, notes prices for cottonseed meal and whole cottonseed vary by region. He says without the economies of scale in freight seen for crops like corn and soybeans, this feed may seem pricey outside of production areas. Also, because cottonseed is less dense, a truckload brings fewer tons than the same size load of corn or beans.

The lowest price points for cottonseed and meal are generally through harvest season—August to the end of the year. Ferguson, based in Memphis, Tennessee, expects a fairly normal old-crop decline in cottonseed prices this year, which means a loss of about $20 per ton from June to September.

"When ginning season hits, prices drop significantly more," he adds. "This year, we are expecting another big production season for cotton, which means the drop in cottonseed and cottonseed meal prices will be more pronounced than normal."

At press time, Ferguson said old-crop cottonseed in West Texas was about $225 per ton. He doesn't expect old crop to fall below that price; but new-crop prices will likely drop under the $200 mark, into the mid- to upper-$190s through the end of the year, based off this year's 13.52 million planted acres.

Ferguson is watching the market for a major move in competing price floors (corn, soybeans). "This fall, compared to previous years, that price floor matters more because we have a large supply of cottonseed.

"It's also important to watch the dairy market, which competes for cottonseed," Ferguson says. "Right now, it looks like it will be the fourth quarter before margins improve on milk prices. Then, we may see demand for high-fat, high-protein feeds like cottonseed really jump."

By historical standards, Ferguson says cottonseed and meal are cheap right now. Since 2007, meal prices have reached $450 per ton, but the average is more around $275.

As anyone knows who produces or buys hay, there is a huge range in quality and price for this common feed. Nutritionists urge producers to have an analysis on hay they feed to be sure cattle are getting what they need to maintain body condition and reproductive performance.

Many beef producers will use maintenance or utility hay, with a relative feed value (RFV) around 100. According to USDA quality guidelines, this grade of hay typically has an RFV of less than 130, CP of less than 16% and TDN of less than 50.5%. Fair-quality hay comes with an RFV of 130 to 150.

Richard Halopka, crops and soils agent for the University of Wisconsin in Clark County, reports on hay demand and prices in the Upper Midwest. By mid-July, he saw Grade 3 (RFV 87 to 102) large round bales priced between $40 and $109 per ton, an average of $75. Reports that rains had interrupted hay cutting in many areas were likely going to add to supplies of maintenance hay.

"I don't expect to see a big increase in forage or hay prices," he continues. "We did see a spike in July for dairy hay, which was not typical. But, I think it was because high-quality hay supplies had dwindled, and when it hit the market, there was demand. The lower-quality hay did not spike in price at that point, although it did back in April, when snow kept some cattlemen from getting cattle onto winter wheat. They had to buy some hay to rough them through to green grass. It's all weather-related."

Halopka says he's following drought conditions moving into the fall, which could impact supplies and prices. "If we get into some serious drought areas, cattlemen will have to make some decisions. They can wean calves early, cull cows or buy hay. If they choose to buy hay under those conditions, that could push prices up going into the winter."

As the 2017--18 season wrapped up, soybean ending stocks stood at 505 million bushels—the largest in 11 years. The outlook for the 2018--19 crop was bearish, with projections for 4.3 billion bushels, just shy of last year's record of 4.39 bushels. By the end of the new-crop season, USDA projects ending stocks for soybeans at 580 million bushels. However, tariffs and trade disputes could lead to continued shifts in the outlook.

DTN's Hultman says looking at the November contract, he expects prices will continue to fall. That contract hit its high, much like corn did, in May when it was $10.60 per bushel. By mid-July, November soybeans had fallen below $8.50 per bushel, a first for a November contract in nine years. A bullish supply, plus buyers scared out of the market over the trade dispute with China, have created uncertainty. "It's hard to find anyone brave enough to want to own soybeans right now without a commercial need," he says.

Soybean meal has a more positive outlook. Prices are not expected to drop as sharply because of drought in Argentina. The South American country has been forced to reach out to find other sources of meal, including the U.S. As the largest global exporter of soybean meal, Argentina is giving prices a lifeline, with December meal contracted at $332 per short ton at press time.

Hultman says there's an incentive for soybean holders to crush beans, which will help keep meal supplies level. He projects a low of $310 per short ton.

"Tariff or no tariff, China needs U.S. soybeans this fall," Hultman believes. "From October to February, they will need U.S. supplies. They don't have the facilities to store much, and Brazil's exports run out in the fall. China simply won't be able to get all they want from that country after September."

The USDA reported last year sunflower meal is the third largest source of protein supplement used for livestock. Price is subject to regional drivers, much like cottonseed. The meal is a secondary product after oil is extracted, which means it can be a bargain. Dehulled meal has a CP of 41 and a TDN of 66.4.

The National Sunflower Association executive director John Sandbakken noted in mid-July the U.S. sunflower crop looked very good. Meal prices at that point were $150 to $160 per ton. "I would think we would tend to stay in that price range into the fall," he says. Historically, he notes, sunflower meal can be around $200 per ton but, during the last two years, has tended to stay between $145 and $153 per ton. Harvest starts in October and goes through November. Unlike other commodities, don't expect significant price fluctuations around this time.

"We are the opposite of soybean meal," Sandbakken explains. "Meal is our byproduct. So, those prices are generally put at a level meant to move the product rather than get the maximum for it. It's all based on inventory and area."

Wheat middlings are common in grain rations for both beef and dairy cattle. They can replace corn or barley in the mix, but palatability can be an issue. Midds are fine particles of wheat bran, wheat shorts, wheat germ, wheat flour and some byproduct from the mill. They generally have a DMC of 89%, a TDN of 80%, starch/sugar around 38% and CP of 19%.

Wheat supplies worldwide have been at record levels, keeping prices depressed. DTN's Hultman says old-crop stocks in the U.S. were around 1.08 billion bushels mid-July. Once new crop is harvested, he believes ending stocks will come down by no more than 130 million bushels—so the needle isn't moving much.

That drag is due in part to Russia, which had a record 2017 wheat crop. This is making it challenging to find an export niche for U.S. wheat. Hultman says December futures contracts peaked at $6.15 per bushel in May but, by mid-July, had dropped to $5.13 per bushel.

"That wasn't as steep a drop as corn or soybeans, but wheat has been so bearish that it's hard to be disappointed anymore in this market," he quips. By year's end, Hultman says it's possible wheat will be to $4.50 per bushel. 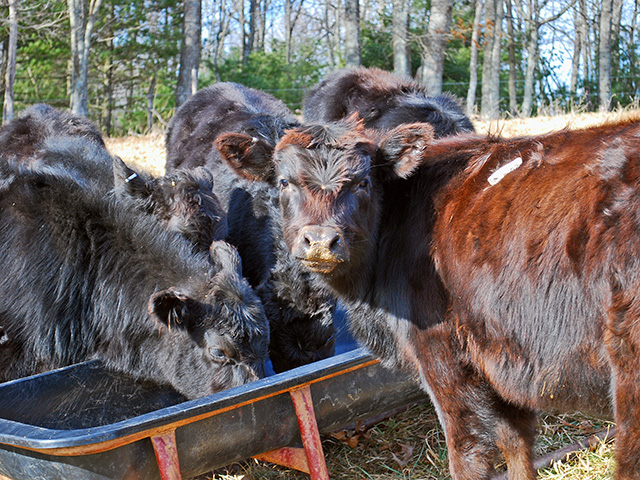