For Washington state's Jake Frazier and Beth Adan, local farmers' markets have made entry into farming more accessible. The first-generation producers didn't grow up on a farm, had no family acreage and couldn't afford to buy land. But, the ever-growing "buy local" food movement has created opportunity, lowering the bar for entry into agriculture for them and others.

Frazier and Adan lease 4 acres for their year-old Aquaberry Gardens operation, near Pullman. Using aquaponics, the couple grow 30 to 50 types of vegetables and specialty items, including corn, pumpkins, potatoes, peppers, basil, purple kohlrabi and hot peppers. A third of their income is from three farmers' market sales—in Pullman, Colfax and Moscow.

"The farmers' markets are a great recruitment tool for our CSA [community-supported agriculture]," says Frazier, noting all of their CSA customers (which account for a third of their business) have come to them through farmers' markets.

The USDA reports the number of farmers' markets in the U.S. rose from 3,706 in 2004 to 8,284 in 2014. And, while direct-to-consumer food sales dropped 1% between 2007 and 2012, the overall trend in selling product through face-to-face contact, particularly at farmers' markets, is on the upswing. This doesn't mean large-scale commercial producers are going to lose their prominence in the world's food system. It does mean producers exploring alternative markets, particularly those grounded in the "buy local" movement, are likely to see increasing market access and value-added income in the coming years. The "buy local" conversion has become so strong in some parts of the country that former wholesale producers have moved entirely to direct-market sales.

That's been the case for Tony Hook, owner of Hook's Cheese Co. Inc., in Dane County, Wisconsin. For the first 31 years of his agricultural career, Hook and his wife, Julie, made commodity cheeses, 95% of which went under other people's brands or store brands. In 1994, the Hooks started attending the Dane County Farmers' Market (DCFM) on Capitol Square in Madison, where they offered free samples of their cheeses. Pretty soon, chefs, restaurants and specialty stores got to know their brand. The Hooks now sell almost all of their 60 varieties of cheese direct to customers. Revenues have increased 15 to 20% every year since 2000, even though they make significantly less cheese now (250,000 pounds annually instead of the 1.5-million pounds they made producing commodity cheese). They no longer put in 80- to 100-hour work weeks. To put it in a nutshell, Tony says, "we are making more money for the amount of work put in."

He credits the DCFM for much of the shift, noting his presence there not only got his name out but continues to do so. By 2001, the Hooks were selling half of their product at the market.

The Hooks' story isn't unusual. Sarah Elliott, market manager for the DCFM, says the market has 275 active members and a two-to-four year waiting list, and draws customers not just from the immediate area but also from Chicago. It is the largest producer-only farmers' market in the country, occupying an eight-block square, encircling the Wisconsin State Capitol. While the market is a tourist draw, Elliott says that "most of our regular shoppers who leave the market with several bags full of goods are from Madison and Dane County."

The DCFM is also a favorite destination of area chefs, Elliott adds. Many of the products end up on restaurant menus, and are typically farm-identified, which is great exposure for the farms, as well as a fabulous way for customers to see the potential of the products found at the DCFM.

"The quality of the food drives success," Elliott says. "It's hard to replicate the freshness of a farmers' market in a typical grocery store. And there is no way you can duplicate the experience of buying your food directly from the person who grew or raised it." 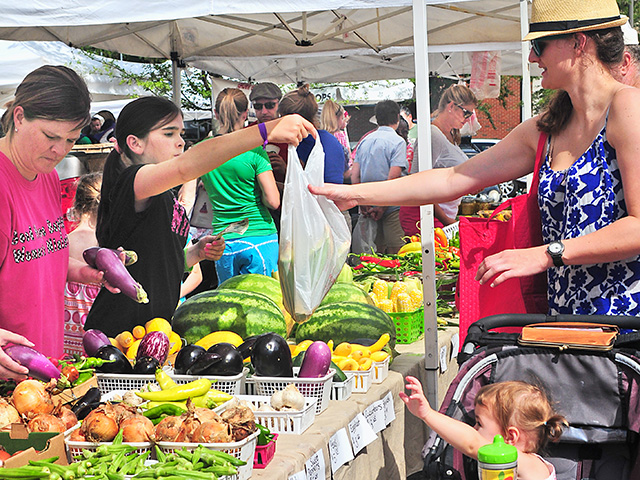