Trey Denny knows the ups and downs of the cattle business. The ups: Five years into the trade, he's accumulating acreage, building commercial and show-cattle herds and selling Charolais-Angus cross show steers to 4-H and FFA kids in his home county in East Texas and elsewhere.

Ranching outside Detroit, Texas, is Denny's life, and he's happy to be here. He is dealing with the downs. For example, only 60% of his cows were coming back into heat after calving, so he refigured feed rations to boost the number to 90%.

What makes Denny unique is his age in dealing with them. He was just 12 when he first entered the beef business. Well, technically, he was 2 when he first entered the beef business. At 2 years old, Denny was given three red Limousin heifers that were the last remnants of his grandfather's Limousin herd. From those three, he raised calves and kept the heifers, and he sold the steers. The youngster has been showing steers through 4-H and FFA since fifth grade. For the past 15 years (Denny is now 17), the money from the steers was applied to a piece of land that his grandfather owned. Now, Denny owns in Red River County, Texas, 65-acre and 110-acre pieces of land in his name.

Five years ago, he first wrote a business plan showing how he planned to raise and sell show calves. He convinced his grandfather to help him start it.

No youngster leaves the starting gate without help, and Denny's whole family has provided assistance. His father, Todd Denny, manages the East Texas ranch owned by his maternal grandparents, David and Linda Hicks. His mother, Tracy Denny, is an agricultural sciences teacher at Chisum High School, in Paris, Texas, where Denny went to school.

Denny's grandfather Hicks took on a special role. Hicks, who owns the ranch on which Denny is building his business, initially lent his grandson 40 of his best commercial Angus cows for artificial breeding to top bulls to produce show calves.

The 40 cows were loaned to him for free for one pregnancy. Denny purchased the semen online himself. He started his club calf herd from 39 calves produced that first year. Denny sold four steers for an average of $1,500 each and four more at the sale barn for an average of $1,250 each. The remaining 31 head were heifers that started his female club calf herd. They are now bred with their second calves for fall 2017 delivery.

How much self-confidence does it take for a 12-year-old to make business calls to adult strangers in other states?

"I never really thought about it," Denny says. "I just grabbed the phone and started talking. It's a lot easier when you know you have something in common with the person on the other end."

His business, called TD Cattle Co., got rolling with his grandfather's help but also with a 4-H loan from what is now Texas Farm Credit, in Paris, to purchase a show steer.

The steer, Magnum, turned into a profitable investment. The animal won seven awards and was grand champion overall steer at the East Texas State Fair in the 2013/2014 season. Magnum sold for $8,600 at the Fort Worth Livestock Show and Rodeo after placing third in his class. Denny paid off the original $3,000 loan and had plenty left over to invest in his business.

Now, he has one loan through USDA-Farm Service Agency for four Red Angus cows used as breeding cattle. "It's a $5,000 youth loan for ag kids, either 4-H or FFA," Denny's mom explains. "They have to have their record books in order, and advisers have to sign off on the project."

Denny has a bank checking account and has established charge accounts at a feed store and vet clinic. He pays his own bills, and this past summer, in a move known to cattle producers of all ages, he took on outside jobs, one at Tractor Supply Co. to help meet cash-flow needs. He advertises his show calves through social media, mostly on his Facebook page.

"This all started with the cows in partnership with my grandpa," Denny says. "It evolved with bank loans, a checking account for running the feed for our show calves, show supplies and entry fees. It keeps you on your toes, but once you get on the higher end, it starts to pay off."

FFA has received a lot of credit over the years for developing character and leadership, and Denny fits the mold. In February 2017, Denny was elected Area VI FFA President, serving more than 11,000 FFA members and almost 100 schools. In 2016, he was the FFA state winner in the Star Chapter (second-year member) in the Production category following his victory as 2015 top state FFA Greenhand member in Production. His beef record books also recently took second place at the Texas State 4-H Roundup.

"The little kids in 4-H and Junior FFA are watching Trey as he shows," says his grandmother, Linda Hicks. "And, he helps them. Trey is a role model to a lot of young kids."

"Trey already has offers for scholarships because he has done so well," says Denise Allison, the Texas Farm Credit loan administrator in Paris, where he received his first loan. "I see him in the future being one of the largest cattle producers for this area and even for Texas. At an early age, he knew what a plan was, and he learned from his early mistakes. He doesn't have to learn those when he gets out of college."

Denny plans to attend Blinn College, Brenham, Texas, and then Texas A&M University, where he plans to major in animal science with emphasis on ranch management and genetics. In five years, he plans to be out of college and running TD Cattle Co. on his own.

"I call him my fourth kid, and this kid has really been amazing," says Amy Leigh Koesters, of Magnolia, Texas, who is Denny's calf-scramble greeter for the Houston Livestock Show. "He's won at shows, and he's put in the work to make sure the nutrition is correct, the muscle is correct, the walk is correct." A kid finds his passion, and Denny's happens to be livestock, Koesters says. "I think that once he got the bug, he told himself that if he didn't take care of these cattle, no one would." 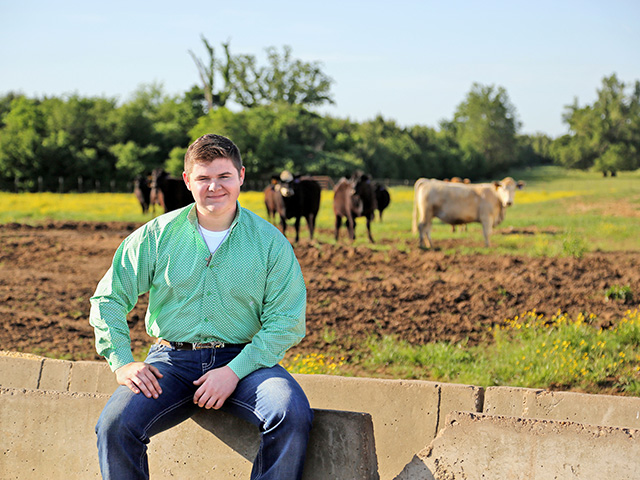