While the farm crisis of the 1980s was tearing communities apart across the country, in one little corner of the world, it was a call to unity. Survival in rural Winston County, Mississippi, was going to be about pulling together. Frank Taylor recalls it well. He joined Winston County Self Help Cooperative (WCSHC) in 1989 as team leader.

"We saw people losing farms and being so desperate, there were suicides. The people in this community came together to help each other keep their farms. They began to buy and sell collectively to save money. It was a way to survive," he recalls with pride.

A founding member of the group and active until her passing five years ago, Omerio Dotson was part of the heart of WCSHC. Her words still emphasize the level of need the cooperative was created to address. "Small family farmers were under siege due to unfavorable financial conditions and USDA's lack of interest to serve black farmers," Dotson stressed. "We needed an outlet to earn more income from our natural resources and increase sustainability in rural Winston County."

Dotson and the rest of the founders created a force that helped that county, as well as those areas around it, survive the tough times and grow in the good times. They focused on timber management, gardening, preserving foods, grazing animals and youth education.

Wilson Murray, now retired from the Natural Resources Conservation Service, was a state outreach coordinator in 2004. He says the WCSHC was, and continues to be, a great example of what small landowners can do to maximize their ability to produce income from the land.

"Research has consistently shown that if small and limited-resource farmers try to do it alone, they will be shut out of the mix," he says. "By banding together and forming a cooperative, they are able to continue to operate and be sustainable within their communities."

The WCSHC's slogan is "Working to Save Rural America." The group has been recognized at state and national levels numerous times, winning Co-Op of the Year twice—once in 2004 at Alcorn State University's Small Farmers Conference and again, in 2005, from the Federation of Southern Cooperatives.

Murray says, "Frank Taylor and the Winston County Self Help Cooperative are the epitome of how we do outreach in the Natural Resources Conservation Service. We use the 1890 land-grant institution and community-based organizations. What he's doing here helps us reach out to people who may be left behind and miss the programs we offer."

The WCSHC became a launching pad for members' successes under its first president, Columbus McReynolds. Over time, though, the roster dwindled to just four. A new action plan was set into place to help revive the organization and grow membership.

"This plan of action ignited discourse among some members because they only wanted to focus on agriculture-related issues and to embrace the holistic approach of surviving in rural America. However, the leadership galvanized and steamed forward ... "

Frank Taylor says today, the mission continues to center around helping farmers and landowners create additional income streams through grazing animals, vegetables and timber. But, leadership, financial workshops, health, housing and youth education are also key parts of the program. Membership currently stands at 39, with three of the founding members from 1985 still active in the cooperative—Dee Dotson, Bobby Hardin and Columbus McReynolds.

Shintri Hathorn is one of WCSHC's newer members, but she comes from a family that has managed a farming operation in Winston County going back to her childhood. Her family, including mom, Claranett Hathorn, and dad, Louis Hathorn Jr., are still landowners here.

"We grew up around animals and small-crop production, and we all followed with a formal education in agriculture," Shintri Hathorn says of herself and her sister and brother. Currently a Holmes County School District administrator, she has a 15-year tenure as an ag teacher in Mississippi's Jackson Public School district. Her family's farming operation allows her to put into action what she has spent a large part of her career teaching.

Shintri Hathorn manages both a cattle and a meat goat business. Her cattle are a mix of Charolais, Angus and Brangus; goats are a Boer mix. She is the most recent recipient of five Hereford heifers through Heifer International, a partner in the WCSHC. She hopes the new cattle genetics will help build up quality in the near-20-head commercial herd.

"Our main focus right now in the beef herd is on meat quality and muscle development," she says. "In this area, we are also looking for an animal that is drought-tolerant and can withstand high temperatures. And, we need good milk production out of our females."

Hathorn says she is working toward a more defined breeding program for the cattle, shorter than the 75 to 90 days they average now. Being a member of WCSHC means having mentors and support for the operation, both in animal husbandry and forage management.

Frank Taylor says cattle are a big area of interest for cooperative members and calls the partnership with Heifer International a flagship program. In 2017, members marketed more than 100 heifer and bull calves, helping diversify incomes. In addition, they passed on 15 heifers to three more families in the group starting cattle operations.

"The heifer project has worked out so well because it's helped generate interest in people maintaining ownership of their land, and most of these landowners are accustomed to having grazing animals. So it's very workable," he explains. "Some members have had animals in the past, and for those that haven't, we have experienced cattlemen in our group who act as mentors."

Taylor says they work with forage experts through Extension, as well as veterinarians, to be sure that any necessary help is available. In addition, the group maintains a 40-acre demonstration pasture where they allow cooperative members without space or weaning pastures to bring calves. The cooperative also works together on the purchase of inputs and sells cattle collectively to maximize returns.

Hathorn notes she has been a part of a workshop where the concepts of lot sales were introduced. "That is what we are working toward now. That goes back to quality and being able to meet certain specifications. It all works together," she says.

WCSHC members support the group financially and have common goals. There is a one-time joining fee of $100 and $140 in annual dues. To be a member, one has to have what Taylor calls "a legitimate interest," as well as access to land, either through lease or ownership.

"If you want to have cattle, you need to have the land to do that. We want to make sure everyone is in a position to succeed," he says. "Once we see a member has access to the natural resources they need, we move forward through meetings and mentoring programs."

Being one of the limited number of recipients of heifers each year is a process that starts with the land and ends with your name on a list. Taylor says it normally takes about a year to receive the animals. Recipients are given five Hereford heifers and are asked to return the same back to the program within three years' time.

New member Kevin Springs is working with mentor Alonzo Miller to learn how to handle cattle. He's next up to receive heifers.

"He is from an urban area and migrated to Mississippi about a year ago," Taylor says. "It's becoming more common to see people transitioning back to this area who may have left a generation back. We've been seeing this for about 15 years now.

"Some of these people have retired, some just want to move out of the city," he continues. "In most cases, their families had land here, and they were ready to become more active in the management of that land. Someone puts them in contact with us, and we start them out learning about land management. The cooperative acts as a conduit in a way. We show them what we can do for them but also make them aware of other services available in the area, too."

In addition to Heifer International, a few of the partner groups that work with the WCSHC include Alcorn State University, the Natural Resource Conservation Service, Farm Service Agency, Mississippi Forestry Commission, Mississippi State University and the Mississippi Association and Federation of Southern Cooperatives.

These partnerships, Taylor stresses, are the lifeblood of the cooperative. Without them, it would be impossible to accomplish all the good works of the WCSHC.

"The average cooperative member here has about 40 acres of farmland. That doesn't sound like a lot. But, what we've found is that when we work together, it is more than enough to make an important difference. We believe Winston County Self Help Cooperative and Youth Group will exist into perpetuity with its mission of helping save rural America." 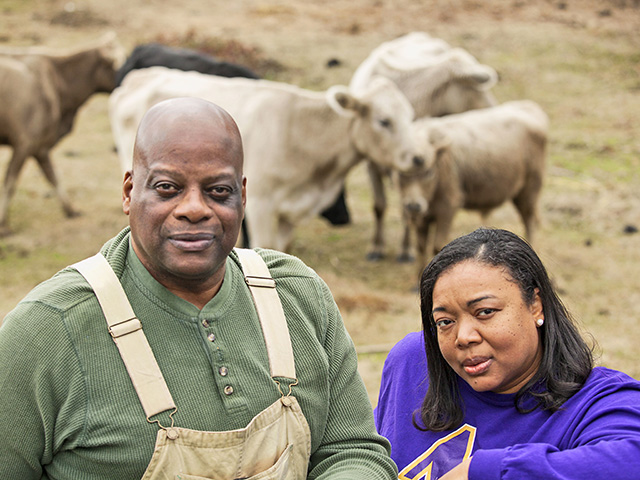