It's a kind of hard-earned freedom when a cattle producer builds a direct-sales platform. Those who hit the mark are a unique brand. They know buyers will ask questions about their products, and they come prepared with answers. It's proof, in a way, that patience pays ... literally.

Consider Kingsland Ranch Beef, a branded product from the King family, out of West Monroe, Louisiana. David King says they started positioning the herd to move into direct beef sales 19 years ago. Today, the venture supports a cow herd of 140 head, and King says expansion is in their future.

What King is experiencing, both in terms of opportunity and that openness to a direct connection with consumers, is something many in the beef industry predict all producers will deal with in the not-so-distant future.

While demand for beef and the reputation of U.S. product are strong, export markets and individual buyers are increasingly looking for reassurances of safety and origin. The ability of the industry to provide the same type of open information King gives his customers will decide what kind of market American beef producers enjoy not just in 2018 but for decades to come.

To illustrate how demand can throw the market a curve, Glynn Tonsor says to look no further than 2017. That's when the industry took an uncommon turn, as demand drove fourth-quarter calf prices higher. That kind of late-market surge has happened just five times in the last 15 years.

The Kansas State University beef economist explains: "Last year, we saw beef demand, both domestically and on the export market, get stronger throughout the second half of 2017. Typically, due to a higher supply of calves beginning in September and October, we see prices pull down. Given enough demand, you overcome that. The result was almost everyone last year got a better price than they thought they would."

Tonsor says that fourth-quarter anomaly isn't something he expects to see repeated in 2018. He predicts this year's market to be more of a break-even environment largely because of mostly stable input costs.

"The cost to run a cow in 2017 was around $807," he notes. "We expect this year, that will be around $812." Clearly, drought conditions that force producers to purchase more feed could increase costs.

Tonsor also believes there's opportunity for stockers this season. "There are two ways stockers do well in this market. If demand is strong and we see trade deals improve, or the global economy grows faster than projected, anyone selling a heavier animal benefits. So, those in the middle who bought calves and added weight are in a good position.

"The other way stockers do well is by buying discounted calves," he continues. "If I buy calves in October in a bearish market, and during the winter the outlook improves, I sell at a higher value than I bought at. The stocker sees upside, but it's a negative for the average cow/calf producer."

Tonsor believes the high end of the calf market has already been set, unless some market dynamics change moving into the second half of 2018.

"Supply pressure going forward looks to be greater than demand," he notes. "So, if a stocker is making money, it's probably going to be because he got a cheaper calf."

Missouri stocker Tim Saunders says his side of the beef business has always been about making the margins work. The Rea operator constantly tweaks his program to maximize those margins.

"We've increased the number of calves we're backgrounding and decreased the number we're finishing here," he says. The change was due mostly to issues with mud and his desire for access to other options for packing plants. It also fits with his growth goals for the business.

"I felt we were getting too much shrink doing long hauls," he explains. "I hope we'll have more carcass weight by making shorter hauls. I'm also looking for expansion opportunities. Right now, we turn the yards one and half times. As a preconditioner, we can turn the yards three or four times. That's without changing capacity."

Saunders, who, in the past, has averaged backgrounding around 2,000 calves annually, says he is working with some Kansas finishing operations to try out his plan.

Protocol for the stocker remains pretty much the same, he adds. Saunders buys 3- and 5-weight calves from sales barns in the state. He feeds a ration of dry, rolled corn, ground hay and corn gluten feed.

Not one to make long-term projections for calf prices, Saunders admits he starts to feel concern anytime packers have the market leverage. "When they have plenty of cattle to pick from, they become more selective and increase discounts on certain types of animals," he says.

Saunders believes the keys to his profitability are flexibility and making the best economic choices at any given time. Some years, that calls for him to put up silage, for example. Other years, the corn and soybean producer says that isn't the right call.

"The key for us is don't get locked into one production scenario. As fast as our industry is evolving, I'm always looking for opportunities; but I think you have to stay fluid to evaluate them."

Being able to adapt may be especially key this year, as some industry adjustments have been large. Consider early adjustments to calf numbers in USDA reports. Lance Zimmerman, market analyst with CattleFax, notes the agency's revision in January was the second largest in 20 years.

One possible explanation for that big of a revision, he believes, was weaning percentage and the breakdown of females in the herd. "It appears that a significant number of females were classified as cows, or bred females, that didn't wean a live calf."

Regardless of why the adjustment to calf crop size was made, it means the beef industry is likely looking at a situation where calf supplies for this year were front-loaded.

"In January, the cattle on feed number was up 8% year over year," Zimmerman notes. "That makes sense. Every market signal from every segment said sell. Feedyards made money in 2017, and they were eager to buy and fill pens.

"While the on-feed number is up, the calf supply outside of feedyards is down 3%," he continues. "So, it appears that all of our increase in production that can go through the system is already in the feedyards. And, the outside supply is constrained."

Depending on how feedyard margins work out, Zimmerman says prices for feeder cattle and calves could stay near year-ago levels into the fall lows. This balances out the bargaining position of producers selling to those in the next segment, whether that's the stocker, the backgrounder or the feedyard. He says it's possible the lows established in 2016 could truly be the long-term market lows for cattle, withstanding a demand catastrophe of some type.

"If demand remains normal, price lows for fed cattle could remain in the upper 90s (cents) to $1 area," he says.

When looking at female retention numbers, Zimmerman says keep in mind there's a two-year lag. This year's numbers, he believes, will say a lot about how producers see the future.

"What does it mean if we flip the page, and, a year from now, bred-female numbers are similar to this year's? Usually, when you see producers start to decline heifer numbers, it is a trend that continues five to six years. But, if Mother Nature gives us some moisture, and producers have a positive outlook, they may be willing to keep more females back. Texas and the Southeast have the capacity to bring more cows back to grass. Our herd capacity is far from exhausted, and we need to keep an eye on that. It could be a game changer."

For now, Zimmerman believes cow herd growth is likely to continue into 2019 and even 2020 if profits hold.

"If this year holds together, we'll get another sideways year or close to it," he says. "I don't see pressure at the cow/calf level to liquidate. Producers just may not continue to add at the rate they have in the past."

Where the opportunities and challenges lie this year will depend a lot on the individual operation, Peel stresses. He says this market is a work in progress, and if demand holds, 2018 is going to largely be a repeat of 2017.

"My general expectation is we'll have a bigger calf crop in 2018, which would be the fifth year in a row. That means we will have supply challenges. By the fourth quarter, there will be pressure on calf prices. How much pressure we see depends on demand. On the whole, if we see prices fall, we probably won't be any more than 8 to 10% below where we were last year."

Because supply pressure is unlikely to change, Peel stresses any weakness or interruption in demand will be to the down side. The key, as always, is going to be cost management.

"In general, I believe there will be opportunities for profitability at the cow/calf level dependent on costs. At the end of the day, you don't control much of the revenue side, but you can control resources and how you use them. It always comes back to what you can manage as a producer."

PUT THE PIECES IN PLACE

Louisiana's David King may be focused on direct marketing, but he'd agree herd management is his make-or-break ingredient. He says a key for his business has been finding the right composite for both the area and the end use. They use Red Brangus cows crossed with Hereford bulls.

"The Brahman influence is important for insect and heat tolerance," King notes. "We like the Red Angus because they can stay out longer in the heat than the Black Angus, and they give us the marbling we want. When we added the Hereford, we saw consistently bigger rib-eye areas."

Currently, he sells about 70% of his herd's calf crop each year through the Kingsland Ranch Beef label -- about 48,000 pounds. Those calves that don't meet his no-antibiotic, no-hormone criteria or are 450 pounds or less at weaning are trucked to the local sales barn.

King estimates, on average, they see about a 30% premium over sale-barn prices on calves he feeds out and markets consumer-direct. Weaned between 5 and 6 months of age, they are grass-fed and finished on a mixture of hay, corn, soybean meal and molasses.

"I really believe there is an untapped demand for this kind of beef," King says. "Consumers want to know where the meat they are buying comes from. If it's local beef, and it carries your name, that's your reputation on the line. You are trying to do the best for everyone. Even if they just buy a pound of hamburger, I want it to be the best hamburger I can give them."

And, while there are going to be ups and downs in the cattle market, King is convinced the future is bright.

"I think our industry is going to continue to grow, especially in the area of premium beef product," he says. "When you look at our market on the whole, here and globally, I have every optimism that we are in a long-term growth trend." 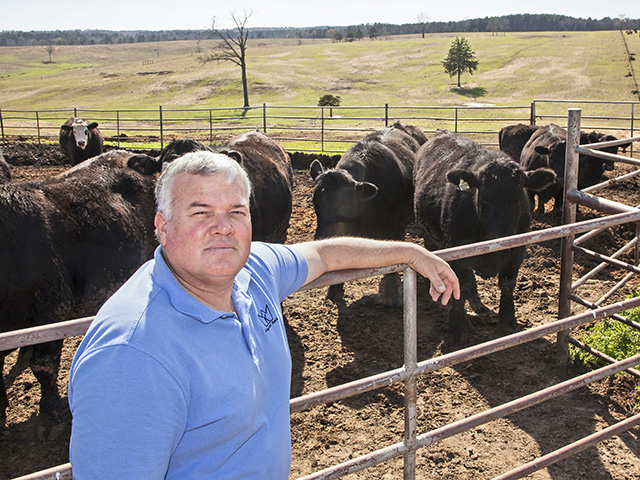