Joy Reznicek has heard all the reasons she should want to replace Kentucky 31 fescue with a novel endophyte, but at Mississippi's Town Creek Farm, they are taking the change slowly with an eye toward cost versus return.

The West Point operation is headed by Milton Sundbeck, who bought the property in 1993. He's emphasized soil fertility and forage efficiency across this Black Prairie, where the cattle of choice are Brangus and Ultrablack. Both are Bos indicus crosses, which make any benefits from shifting to a novel endophyte fescue less of a given in terms of production improvement. Despite that, they've taken the plunge across 300 acres.

"Milton has long had a keen interest in improving pasture forage," says Reznicek, president at Town Creek. She explains they consider the operation to be in the midst of a pasture renovation project going back five years. The focus has been on replacing toxic tall fescue (Kentucky 31) with Pennington Seed's second-generation novel endophyte, Texoma MaxQ II. Per-acre cost to make the change averages around $200.

"We've approached this in stages," she says. "The last two years, we have been in a wait-and-see mode. We are evaluating the Texoma in terms of longevity. At this point, I'd say it has met our expectations."

A drought in fall 2016 led to the loss of some visible stands of the Texoma, but Reznicek says they saw a good response in those areas come spring. Moisture and fertilizer brought it back where they needed it to be.

On the animal production side, Reznicek says in observing their females, they've not seen a difference between those on Kentucky 31 and those on the Texoma in terms of conception or body condition. She's pretty sure that's due to the hardy genetics of the herd. She points to research comparing response to tall fescue between Bos indicus and Bos taurus crossbred beef cattle. One work, reported by Richard Browning Jr., with Tennessee State University's research program, showed Bos taurus cattle grazing a toxic endophyte fescue had more of a reduction in postweaning growth (spring and fall) than Bos indicus crosses (Brahman/Angus; Simmental/Brahman/Angus).

For producers of Bos taurus breeds and crosses, research does point to a strong upside with that shift to novel endophytes.

A University of Arkansas (UARK) study compared animal performance on toxic endophyte and novel endophyte fescues over three years. The researchers consistently found better numbers for those cows and calves on novel endophyte stands. One of the authors of those studies, Ken Coffey, is a UARK researcher. He notes cow, heifer and calf performance were all markedly improved on a novel endophyte.

While cow and calf performance is strong, Pennington Seed's Chris Agee says in today's market, producers likely will get the most immediate bang for their investment in a novel endophyte with stocker operations.

"If you're in the fescue belt, and you have stockers grazing toxic fescue, you will see the most gain out of a pasture renovation," he says. "Those stockers take off on the novel endophytes."

Research at the Central Georgia Research and Education Center, near Eatonton, shows about a 1-pound improvement on average daily gains in both fall and spring stockers comparing toxic and novel endophyte fescues (Jesup MaxQ). Looking at the fall stockers, on a gain per animal basis, per acre was 137 pounds on the toxic endophyte and 188 pounds on the novel endophyte. Calves were stocked at a rate of 1.5 head per acre, and gains took place over a 63-day grazing period.

Pennington's Agee notes Town Creek's average of $200 to renovate an acre of Kentucky 31 to an acre of MaxQ is a very good number. He says drilling in 15 pounds per acre of Texoma MaxQ II will cost a producer about $52.50 in seed. Add to that labor, chemicals for burndown and feeding animals while that pasture is out of rotation. Agee believes the payback is there, though, and adds today's novel endophyte fescue is much more resilient than varieties in the past.

"This is still tall fescue, which is a tough grass," Agee explains. "If you graze it into the ground going into the summer, you can do some damage, but that's true of any fescue."

Novel endophyte fescue is a cool-season perennial grass, well adapted to those areas where Kentucky 31 is grown. This is primarily the eastern half of the U.S. It is best in soils that retain moisture and are fertile, with a pH of 6.0 to 6.5. It is considered relatively tolerant to drought.

Renovating a field from toxic to novel endophyte fescue should be considered a major operation. Expect these areas to be out of production for several months. That means part of the plan to renovate is to locate a feed supply or reduce the number of animals on-site during renovation.

The University of Georgia outlines steps to renovation in Extension publications. In addition, the Alliance of Grassland Renewal is an industrywide organization focused on education and workshops to help producers replace toxic tall fescue grass with the best varieties for their operations.

The Spray-Smother-Spray method is one common approach to renovation. It includes these five steps:

2. Destroy The Old. After preventing seed head formation, spray the toxic tall fescue stand with a moderate to heavy rate of glyphosate, at least 2 pounds per acre. Apply a minimum of 15 gallons of solution per acre. Time this one to two weeks prior to when a summer annual crop would be planted.

3. Plant A Smother Crop. No-till in a "smother" crop. Consider pearl millet or a hybrid of sorghum/sudangrass. This can be grazed all summer.

4. Spray Again. Mid- to late August, about a week before the new cool-season grass needs to be planted, make a second application of glyphosate.

5. Seed The New. Use a no-till drill after that second herbicide application to get the novel endophyte out. Plant according to recommendations by the manufacturer. In most cases, that will be 15 to 20 pounds per acre. 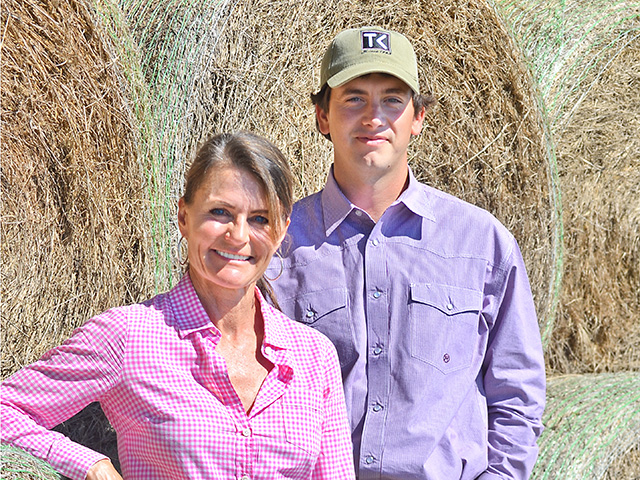