Oh yeah, and what's that little hamburger joint with the clown and golden arches? McDonald's? Some would no doubt claim this Johnny-come-lately vendor has above-average name recognition.

Of course, I jest. If the mere mention of "McDonald's" via television, social media or President Donald Trump's lunch menu doesn't cause a marquee of lights to immediately flash in your head, you probably need to get measured for a half-suit at the local mortuary.

It goes without saying that recognition and admiration are not synonymous terms. All of the powerful brands noted above owe their commanding notoriety to fans and detractors alike. Indeed, I don't think it's unusual for individuals to simultaneously experience both love and hate in this regard.

In fact, I would argue that many beef producers currently struggle with torn allegiance to McDonald's thanks to recent policy announcements by the fast-food giant that seem to pull in conflicting directions.

It's a little like being caught between a good cop and a bad one.

First, consider the easy and most intuitive end of the stick: McDonald's with its sprawling infrastructure and global network sells mind-boggling quantities of beef every year.

In a nutshell, McDonald's is the world's largest restaurant chain by revenue, serving over 69 million customers daily in over 100 countries across nearly 40,000 stores.

Serving 25 million customers daily in its nearly 14,000 U.S. outlets, the McDonald's menu has grown greatly, but beef remains the core of the firm's success.

According to Rob Cannell, the company's chief beef and pork buyer, he needs to fund enough product to make 15 million hamburgers each day. Such amazing velocity off of the grill makes McDonald's the single-largest beef purchaser in the U.S., nearly 1 billion pounds, at about $1.3 billion in value annually.

While the team in product development has occasionally been guilty of mutinous behavior (e.g., McNuggets, McRib, even vegetarian wraps), corporate leadership has generally been loyal to the meat that brought 'em to the dance. In fact, when CEO Steve Easterbrook was given the reins of a stagnant operation in 2015, one of his first decisions was to refocus on basics, like a good-tasting hamburger that consumers enjoyed.

All of which brings us to the positive headline of 2018 that beef producers can applaud without the slightest reservation.

In 2017, McDonald's announced plans to use all-fresh beef in its Quarter Pounder. This month, the company finally began serving fresh-beef Quarter Pounders and "signature crafted" burgers in 3,500 restaurants across the U.S. McDonald's is expected to have the program throughout the restaurant network by May (except in Hawaii and Alaska).

Such a shift in policy should most certainly have a positive impact on the domestic wholesale trade. The program will displace a percentage of presumably frozen, imported beef with domestic-sourced, fresh, lean beef in the Quarter Pounder formulation. This should support the domestic 90% lean trim market, which has ties to lower-quality fed cattle chuck and round cuts that can also be used as lean trim alternatives.

So it's all good news, right? What's not to like out of the McDonald's boardroom?

Unfortunately, the home of the golden arches has issued a second policy change, one far less appetizing to beef producers, one strongly implying that the current standards of beef production are hostile to environmental sustainability.

The high-minded pledge said the company would be able to meet its targets, while continuing to grow it business, by taking a range of actions. McDonald's will switch its franchisees' outlets to LED lighting, make their kitchen equipment more energy-efficient, and step up its sustainable packaging and recycling efforts.

Well, that sounds easy enough. Just turn off a few more lights and cut down on the garbage. No sweat. Unfortunately, the crusading paragraphs just kept rolling.

Furthermore, the green police at McDonald's said it would "prioritize action" on beef production. Since red meat is a particularly environmentally unfriendly foodstuff, McDonald's felt the need to underscore the company's determination to move toward more sustainable beef production.

"To create a better future for our planet, we must all get involved. McDonald's is doing its part by setting this ambitious goal to reduce greenhouse gas emissions to address the challenge of global climate change," said CEO Easterbrook. "To meet this goal, we will source our food responsibly, promote renewable energy and use it efficiently, and reduce waste and increase recycling."

On one hand, what kind of troglodyte would you have to be to take offense at this soaring rhetoric? Who among us doesn't want to be the best possible steward of Mother Earth?

And yet talking the talk and walking the walk are two very different projects.

Frankly, I get very nervous when ambiguous phrases such as "sustainable beef production" and "sourcing food responsibly" start flying around like aimless spitballs. Can we really judge their value and practicality if no one really knows what they mean?

My great fear is that some well-intended individuals and businesses start defining such sketchy goals by making incorrect assumptions about the status quo. For example, an incredible number of responsible citizens still believe the misleading suggestions of "Livestock's Long Shadow," the environmental study issued by the United Nations in 2006.

Infamously, this study suggested that livestock production was responsible for 18% of greenhouse gas emissions, more than the entire transport industry. It sent shockwaves to many corners of the world until the larger scientific community seriously examined the study's faulty methodology. While everything from corn production to the burning of the rainforest was counted as the carbon cost of livestock production, only fossil fuels were charged against transport.

Even U.N. scientists have acknowledged the unfair comparison and promised a corrective study. More than a decade later, we're still waiting.

Please understand: I'm not some flat-earther who's blind to the environmental risks and responsibilities of livestock production. But if we allow some zealots to exaggerate and/or misrepresent the reality of the context, then meaningful progress on all fronts is doomed.

Finally, one of the most important of these fronts is the awesome task of feeding the world (i.e., 7.5 billion, on its way to 10 billion by 2050). I think that means we just can't be good stewards, we must be good, productive stewards.

In McDonald's-speak, I think that means we just can't have range-free chicken and grass-fed, organic burgers, at the drive-through -- we must have safe, plentiful and affordable offerings produced by a sustainable agricultural economy. 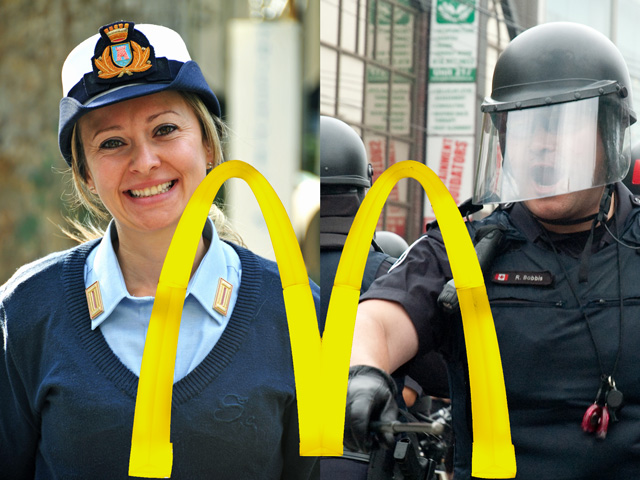