Heavy rainfall, from the middle to lower Mississippi River Valley eastward across much of the Ohio River Basin, resulted in widespread river flooding along Cincinnati, Cairo, Memphis and other locations, according to the USDA weekly Grain Transportation report. High water has caused navigation disruptions on sections of the Ohio, Illinois, Tennessee and Arkansas Rivers.

The Ohio River has dropped below the flood stage of 52 feet, and as of March 4 was at 46.59 feet. The National Weather Service is predicting the water will continue to recede over the next few days after water levels rose along Cincinnati's riverfront to 64.7 feet, the highest point since 1997.

On March 2, American Commercial Barge Line (ACBL) noted in its daily river update that many fleets and docks shut down along the Ohio River (OR), while elsewhere, slow transits were expected throughout the river. "Do not expect returning to normal conditions for at least 2-to-3 weeks," ACBL added.

ACBL also noted that Markland Lock (OR mile marker (MM)531) and McAlpine Lock (OR MM607) have resumed locking after the river fell below flood stage there. "Smithland Lock (OR MM918) suspended locking on Feb. 26 and is not expected to be back up until March 11-13. JT Myers Lock (OR MM846) had suspended locking, but boats are running the pass March 2 with a 12-barge restriction. This is expected to last until March 10. Cairo is expected to crest at 55 feet on March 3, at 50 feet; taller boats will have bridge clearance issues for until the middle of March."

"On the Illinois River (IR), meanwhile, heavy rain over the past two weeks and melting of the snowpack in Northern Illinois has resulted in widespread flooding that has extended downstream to the lower Illinois River basin," hydrologist Mark Fuchs at the Nation Weather Service (NWS) St. Louis forecast office reported.

On the Arkansas River, there is still limited movement with reduced tow sizes (six barges) below Van Buren (AK MM298) until the first half of next week, noted ACBL. On the Tennessee River, slow transits with reduced tow sizes are expected until the middle of this week. Chickamauga Lock (TR MM471) has reopened and is only operating during daylight hours, according to ACBL.

The large volumes of water from the aforementioned rivers are flowing into the Mississippi River, causing its lower portion to reach flood stage at multiple locations, noted USDA.

In the Lower Mississippi River (LMR) down to the Gulf, high water has resulted in reduced tow sizes, both north and southbound. "In most cases, tows have been reduced by two strings southbound (five-to-10 barges) with expectations this will continue for the near future. Transits are only allowed during the daylight through Memphis (LMR MM725) until second half of March, and Vicksburg (LMR MM435) until the end of March," noted ACBL.

That means we may not have seen the last of flooding if the precipitation forecast comes true. Should flooding continue into spring, it would slow barges up and down the rivers, but also it could also hamper spring fieldwork and planting in some areas. 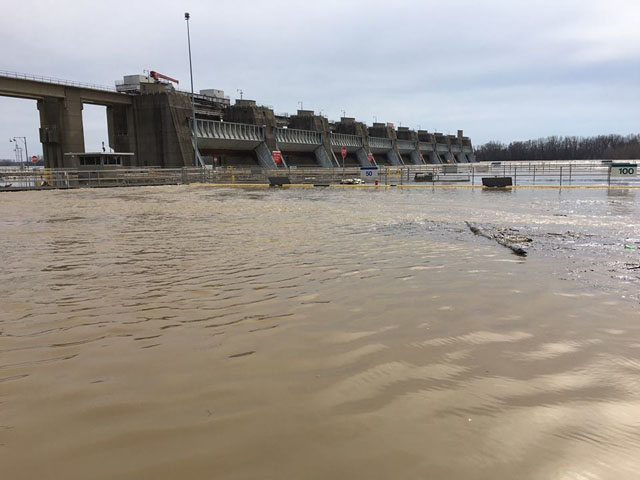 About the Author
Connect with Mary:
@MaryCKenn