Tick fever is a battle Texas cattle producers are fighting again, despite years of successful eradication. As the summer months approach, cattlemen and landowners are being warned to be especially vigilant.

One outbreak in Live Oak County last year was reported to have possibly exposed not just several locations in the state of Texas to the tick but more than 70 locations outside of the state. All of those tracebacks were cleared, but there were still 10 counties under quarantine: Cameron, Hidalgo, Kinney, Kleberg, Live Oak, Maverick, Starr, Webb, Willacy and Zapata.

More Than A Texas Problem

The stakes are high for producers all across the South. Pete Teel, Texas A&M AgriLife research entomologist, says the cattle fever tick eradication program is about protecting the nation's herds.

"At risk in the southern region alone are more than 400,000 cattle operations producing one-third of all fed cattle," he stresses. "The climate of this region will still support cattle fever ticks as it did before the successful eradication campaign in the early part of the last century."

This upsurge in tick infestations goes to two species of ticks—Rhipicephalus (R.) annulatus and R. microplus. Both transmit the pathogens that cause Texas cattle fever, more formally known as bovine babesiosis. Mortality rates in naive cattle from the illness are 70 to 90%. These same ticks can also carry anaplasmosis.

Both were declared eradicated from the U.S. in the 1940s after a long effort to purge not just Texas but 14 Southern states of the pests. A permanent buffer zone was created along the international border from the mouth of the Rio Grande to Del Rio. But, by the 1960s and '70s, infestations were starting to pop up outside of the buffer zone.

Teel believes, in some cases, these reinfestations were coming from wildlife. But, he says it took until the 1980s for the community to accept that white-tailed deer were at least one alternate host for the ticks. Since then, it has been found on several species of exotic game, most notably the nilgai antelope.

Recent environmental conditions have also tended to favor development of tick populations. Teel notes 95% or more of these ticks' lives is spent off of hosts in vegetation and rangeland. They tend to favor warm temperatures, higher humidity and adequate precipitation.

"When we get into wet periods, these promote the long survival of these ticks on the ground," Teel explains. "The opposite is also true. Dry, hot, low humidity—that is detrimental to tick survival. The tropical species is not as able to withstand cold temperatures for extended periods. So, depending on what kind of winter we wind up having, that could help or hurt with our control efforts."

Since wildlife can spread these parasites as they move throughout the environment, treatment is key. But, it is also more challenging.

With white-tailed deer, the recommendation is to feed them ivermectin-treated corn or to put up permethrin-infused rubbing posts at feeding stations.

As for nilgai antelope, Teel says migratory movement and land use are different from deer. This has left researchers working to determine what new tactics may be most effective. There is no clear recommendation at this time.

Teel notes the antelope are closely related to cattle and were imported from India in the 1920s.

"One of our biggest dilemmas is that we are lacking sustained research funding to help us," Teel adds.

He notes with wildlife, it's impossible to guarantee every affected animal is treated or they are getting 100% of the dose needed for efficacy. There is also the issue of educating landowners when it comes to buying and selling deer or exotics.

"Many people in Texas, due to the success of the eradication program, are not even aware this is a real animal health issue anymore," he says. "They don't understand the risk and, therefore, are more likely to purchase or move animals without being certain those animals are tick free."

Prevention continues to be the primary focus for fever ticks in cattle operations. A new tool was added when, beginning in 2016, the vaccination, Bm86 immunomodulator, by Zoetis, was mandated in permanent quarantine areas. It does not replace systematic treatments and can only be administered by the USDA Animal and Plant Health Inspection Service (APHIS) Veterinary Services, the Texas Animal Health Commission (TAHC) or authorized agents.

Andy Schwartz, state veterinarian and executive director of TAHC, says the vaccine is currently being used throughout the permanent quarantine areas, with the option of using it in other quarantine areas.

"We are encouraging continued research in additional vaccine options," he adds.

The vaccine includes one initial dose, a booster four weeks later and additional boosters every six months. It's provided at no cost to producers, as available. There is a 60-day withdrawal period after its use.

Teel reports female fever ticks stay on the same animal through all life stages until they fall off the host blood-engorged. It then lays 2,500 to 4,000 eggs and dies. Males don't drop off the host but remain to mate with more females. The cycle lasts 20 to 25 days. Any animal movement during the cycle allows ticks to drop in new locations and attach to new hosts.

There are three options for treatment in quarantine areas.

Option 1, considered the simplest, is use of the injectable doramectin, given on a 25-to-28-day schedule, for six to nine months.

Option 2 is a scheduled dipping of the entire herd in a solution containing a parasiticide every 14 days for six to nine months.

Option 3 is to vacate the infested premises so ticks are starved out by removal of hosts. The pasture must be vacated for nine months, and, prior to removal of cattle, they are dipped twice.

Producers concerned they may have found fever ticks on cattle are asked to call their herd veterinarian or the local TAHC office for help with identification. Teel urges surveillance and vigilance for ticks by producers, landowners and animal health agencies. All, he says, will be essential in limiting the spread of these ticks. 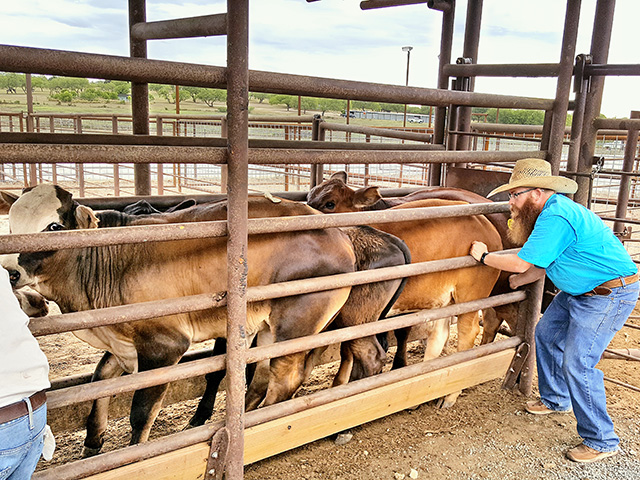