With more than 40 years of experience in beef production, Richard Winter is well-acquainted with the onset of stable flies come late spring and early summer. He also knows that an integrated fly-management plan, including parasitoid wasps, has been effective for him.

A veteran feedlot manager in Texas, Winter is convinced the tiny fly-fighters can take the edge off heavy fly loads when used correctly.

"We started using wasps because of a general lack of success controlling flies with oral pesticides, sprays and baits," Winter said. "We want our cattle to use as much energy as possible for performance. With heavy fly loads, cattle spend too much time fending them off."

Stable flies cause restless behavior in cattle. The flies use their snouts to dig into cattle's bellies and legs, causing pain and stealing blood and tissue to sustain their life cycles. They feed two to five minutes at a time, usually biting an animal several times.

Stomping and tail-switching are all part of cattle's defense responses. If fly populations are intense enough, cattle may actually lie down with their legs tucked under their bodies to avoid bites. Bunching and crowding are also common defenses. All of these behaviors distract cattle from eating and gaining, thereby reducing performance in a feedlot environment.

Common fly breeding grounds include feedbunks and feeding aprons, under fences and near stored hay and other forages. Fly larvae are found in wet, fermenting areas, such as manure piles, near manure pits/lagoons and near water leaks. Once hot, dry weather sets in, stable fly populations usually drop as the pests' breeding areas dry up. Outbreaks can recur, however, after a rainy period.

Parasitoid wasps, which attack stable flies during the pupal stage, are available in many species. They are harmless to anything except fly larvae. The wasps, when placed in strategic areas at critical points in the stable fly's reproductive cycle, can greatly reduce fly populations.

"We found the best mode of application was having our supplier handle timing and placement," Winter said. "Their staff is trained to identify when and where fly populations have the potential to increase."

Wasp with a Payoff

Entomologist Frank Junfin, owner of Kunafin Trichogramma Insectary, Quemado, Texas, manages wasp programs at feedlot. He says their program initially starts with an onsite visit to determine where at the facility stable flies are hatching.

"Parasitic wasps, which are about 1⁄8th of an inch in length, use a stinger to deposit eggs inside fly pupae," Junfin explained. "The eggs hatch into wasp larvae, which feed on the immature fly, emerging as adult wasps within two to four weeks. A mature wasp lays from six to 350 eggs per day."

The wasps will perpetuate themselves to a point. However, the most effective means to suppress stable fly populations is regular (usually weekly) placement of the wasps. Junfin's staff visits regularly to assess the need for wasp placements during fly season.

"One reason for weekly placement is that flies reproduce in a shorter cycle than wasps," Junfin said. "Wasp-placement timing is key to keeping fly populations low." In a fly-management program that includes manure management, pesticide and fly bait, fly populations can be significantly reduced. Use of chemical sprays in wasp-breeding areas must be minimized, as these can harm the parasitoid wasps. Blanket use of chemicals such as fogging is not advised.

Oklahoma State University associate professor and entomologist Justin K. Talley said parasitoid wasps are smaller than a gnat. "If wasps prove unsuccessful, it's usually because they weren't used properly," he added. "They have to be placed after temperatures rise above freezing, be located near fly-breeding areas and be put into use before fly populations are out of control."

USDA Agricultural Research Service entomologist Chris Geden has researched the effectiveness of these wasps. He said they work best in feedlots and other areas where animals are confined in concentrated numbers.

"Flies are highly mobile, and wasps need to be where flies breed, not where flies are found," Geden said. "Our research has shown the cost of purchasing wasps is more than offset by the reduced cost of insecticide. In general, we found wasps pay for themselves when used properly."

Geden recommended investigating suppliers prior to purchasing wasps in order to verify viability of the company's product and to learn how to use it properly.

"Some companies sell a blend of wasp species and may be able to customize a mix tailored to a specific geographic area," he explained. "Some wasp species are more effective in dry conditions, some are better indoors or outdoors. Know exactly what you have for fly-breeding conditions before you purchase wasps." Geden adds there is no magic formula for how many wasps to use. Weekly monitoring of fly populations and breeding conditions will indicate how many wasps are needed and the best placement locations.

"Biological control typically takes longer than chemical control," he said. "Spot cards can be used to record fecal specs and help determine fly-population levels. Counts of more than 100 spots per card per week are usually considered a high level of fly activity." â¦� 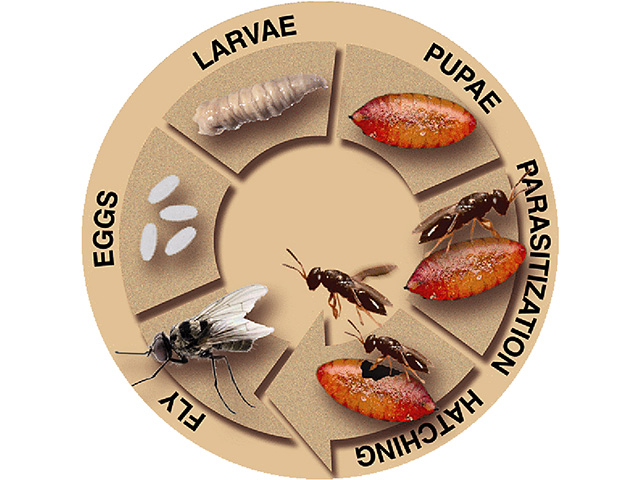