Roy Burris' pinkeye-prevention program begins weeks before he ever sees a calf with irritated or cloudy eyes. And a single case of pinkeye in one heifer is all he needs to see to put his isolation plan into place. Early detection here means quarantine and treatment with an antibiotic. That step, Burris contends, is every bit as important as prevention.

The longtime University of Kentucky Extension beef specialist works hard year-round to both prevent and, when necessary, treat any cases of pinkeye in the 190-cow beef herd he manages at the research and education center near Princeton, Ky. He's the first to admit, though, that when it comes to pinkeye, there is no silver bullet.

Burris keeps a mental checklist of six things he needs to do to keep pinkeye from becoming a problem. That checklist starts with controlling face flies that irritate cows' eyes and spread pinkeye. Next, he keeps pastures clipped so grass seed heads won't aggravate eyes. He provides a mineral mix with Vitamin A, and he vaccinates for pinkeye prior to fly season. He watches for early signs of the disease, which can be treated with antibiotics before permanent damage occurs; and if an animal is infected, he isolates her. He is also careful to keep infected animals out of direct sunlight.

There's a strong economic incentive behind pinkeye prevention. Because the condition causes sufferers to feed less, weight loss is common. A calf with one infected eye can weigh 30 to 40 pounds less at weaning than calves with healthy eyes, according to research from the University of Kentucky. That's a loss of $48 to $64 (based on $1.60 per pound) per head. If both eyes are infected with pinkeye, the calf may weigh an average of 70 pounds less at weaning or even be blind.

"Pinkeye not only decreases the performance of calves, but its effects can detract from the appearance of a pen of cattle and can lower the sales price by over 5 cents per pound," Burris explains. "In addition to the financial loss, pinkeye causes pain and discomfort for animals, which we want to avoid."

Unfortunately, pinkeye is a common problem in beef herds. If infected animals aren't isolated and treated quickly, an infection can spread, possibly affecting 25% or more of a calf crop.

The primary infectious agent for pinkeye is the bacterium Moraxella (M.) bovis. Face flies spread the disease as they feed around eyes and nostrils. Several factors contribute to the development of pinkeye, but most cases start with eye irritation, which face flies then spread from one animal to another.

M. bovis bacteria can survive on flies up to four days, meaning one face fly can spread pinkeye to several animals. And since fences don't stop flies, they can easily carry the disease from a neighbor's herd.

For most producers, fly control means the use of insecticide ear tags, sprays and feed-through larvicides in minerals. Timing is key to their effective use. It's especially important that ear tag use be well-timed.

Producers often insert ear tags when they work cattle early in the spring. If these tags are applied weeks before fly season begins, however, a period of effective control is wasted. The tags may become weak and/or ineffective at the point when control is most needed. Just as important as putting tags in at the appropriate time is removing them at the end of the season. Fly tags that are not removed contribute to resistance.

To prevent resistance, it's recommended producers rotate classes of insecticides in the fly controls they use. For example, if you use pyrethroid ear tags for two years, switch to organophosphate tags the third year. If flies continue to be a problem, use pour-ons, sprays and back rubs (with fly face flips) to improve control.

Breeds which lack pigment on their eyelids (Herefords, Hereford crosses, Charolais and some Holsteins) are more susceptible to pinkeye than dark-hided cattle. Whittier explains they have an increased sensitivity to sunlight and a decreased immune response in the eye.

Calves are more likely to develop the disease than adult cattle because, as animals age, they develop protective antibodies on the surface of their eyes.

Vaccinations And Vitamin A

"I'm not an advocate of vaccinating for pinkeye," Whittier says. "The pinkeye vaccines have been disappointing as the sole means of controlling pinkeye because there are many strains of the M. bovis bacteria, and continuous mutation occurs in the bacteria. While the vaccines contain the most common strains of M. bovis, they do not contain all the strains that occur."

However, beef specialist Burris thinks a pinkeye vaccine is cheap insurance at $1 per head­—even if it's not effective 100% of the time. Along with that, he likes the idea of making sure cattle get Vitamin A in their mineral, which is a proven preventative when it comes to pinkeye.

John Johns, a retired Kentucky Extension beef specialist who now works as a consultant for Burkmann Nutrition Co., Danville, Ky., has formulated mineral mixes with higher-than-normal levels of Vitamin A at the request of a stocker operator in the state. He says he and the stocker have been pleased with the results they've seen.

Early detection and treatment are key to keeping pinkeye from spreading. Watch cows and calves for excessive eye-watering and sensitivity to sunlight. If you notice a calf with a half-closed, weeping eye, check back in a few minutes to see if the irritation is only temporary or the calf might have the early stages of pinkeye.

Approved products to treat pinkeye, Whittier says, include long-acting oxytetracycline (for example, LA-200 or Bio-Mycin 200) and tulathromycin (trade name Draxxin). These products should be used according to label directions in terms of dose and route, and under a veterinarian's guidance. Slaughter withdrawal rules should be carefully observed when any antibiotic is used.

Lastly, don't assume pinkeye is a summertime affliction. It can happen in the winter, as well, Whittier adds.

He explains cattle confinement creates a good environment for the spread of M. bovis bacteria between animals. Animals that have recovered from pinkeye are often long-term carriers and shed the bacteria in their nasal secretions. When these secretions come into contact with the eyes of other cattle, they can lead to an outbreak in the group. And since calves tend to have less immunity than older cattle, outbreaks in stocker or backgrounding cattle are more frequent. 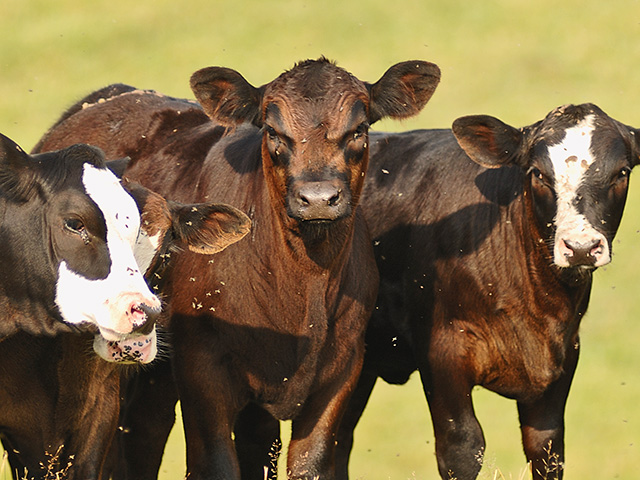