In the past, conservation and confinement operations have not always been thought of as compatible. But times have changed, and when fourth-generation beef producer Lance Sennett started planning to expand the family's confined feeding operation in Waynetown, Indiana, he had stewardship, the environment and a profitable business all as part of the overall goal.

Sennett started with the idea that for the family's feeding operation, which handles 2,000 head annually, a deep-pit beef barn with a concrete slatted floor was the best possible solution. Here's why.

Compared to an open lot, a deep-pit barn improves production efficiency by providing cattle with summer shade and protection from winter's worst conditions. Because no bedding is required, the slatted floor reduces the amount of labor necessary for cleaning the barn. The pit safely holds nutrients applied annually to their corn crops, and fly-control needs are minimized.

Tiling around the bottom of the manure pit allows Sennett to monitor for any sign of leakage. About half the water from the barn's rooftop washes into the manure pit, helping maintain the manure's liquidity.

With the barn's efficiency, Sennett feeds out up to 2,000 head of cattle annually, while managing a 200-head cow/calf herd, a seedstock program and a grain operation.

When Sennett designed his barn, it included total slats in half the barn and sections of slats set in between solid concrete slabs in the other half.

"Our concrete slats are 4 feet wide, 10 feet long and 6 inches deep with 1.5 inches between slats," Sennett said. "Our thought was to start cattle on feed in the pens with 100% slats thinking we could minimize leg and hoof issues by giving the cattle more solid footing as they became heavier."

Over time, what Sennett found is that animal weight didn't seem to play a role in lameness tendencies. Regardless of their development stage, some animals came up lame. In an average year, before they started using rubber barn mats, five to eight head would turn up lame.

"From the beginning, one huge benefit of the barn has been virtually no sick cattle," Sennett said. "Lameness was never an excessive problem, but it was our most frequent health issue."

Profit Concerns. As cattle prices climbed in recent years, animals that had to be removed from Sennett's barn because of lameness were significantly hindering his beef-production goals.

Animat, a company that recycles tires to produce rubber livestock barn mats, helped Sennett solve the majority of his lameness issues. Animat reheats recycled rubber at a high temperature, a process they call "vulcanizing," to ensure total bonding and produce a genuine fused rubber mat that cushions the impact of the concrete floor on cattle legs and hooves. Producers like Sennett can select the mat model that best suits individual flooring design. The mats are priced per square foot and range from $5.50 to $7. They can be expected to last 10 to 12 years.

"We've also identified certain beef breeds that seem to have fewer lameness issues in our slatted barn," Sennett said, adding that those breeds are generally Angus crossed with a Continental. "Soundness is a trait we scrutinize carefully when we purchase feeder calves."

To Build Again. If he could design his barn today, Sennett would have 100% slats on both sides of the barn and use rubber mats to reduce lameness, because the slats make maintenance so easy.

"With all the different facets of our operation, this low-maintenance barn design is a no-brainer for us," Sennett said.

The leg and hoof injuries Sennett experienced in his barn have been common in slatted beef-barn designs around the globe. University of Iowa researchers Renee Dewell, Grant Dewell and Russ Euken led one on-farm trial that compared the effect of bare concrete slats to concrete slats with rubber mats. Their research found that rubber mats improve lameness issues and animal mobility.

"In the 1970s, lameness issues related to concrete slats were one of the reasons slatted beef barns weren't more popular," Euken said. "This one trial with limited replications did show fewer lameness issues when rubber mats are used; however, there wasn't a significant difference in daily gain or feed efficiency with rubber mats over the slats as compared to bare concrete slats."

Sennett sees his barn design as one element of his family's emphasis on sustainability and environmental stewardship. With the barn, costs for veterinarian services have been reduced, and animal finishing timelines are typically shortened by some 30 days. As to setting a dollar figure on how much the reduction in finishing times saves, Sennett says it's dependent on feed costs.

"By applying nutrients from our manure pit to corn fields, we've seen yield increases as much as 50 bushels per acre," he said. Sennett distributes close to 1 million gallons of manure annually, injecting it into cropland. The barn design allows him to manage that input better and maximize its value to his crops.

An additive in the pit helps control odor, which is important to Sennett since his farm is located close to a major interstate highway. The family uses a custom-blended liquid microbial treatment by Iowa Beef Systems called CattlePit 18 with the manure.

The Sennett family is one of seven regional winners of the Indiana Environmental Stewardship Award, sponsored by private and federal environmental organizations, and administered by the National Cattlemen's Foundation. The program recognizes cattle producers across the U.S. who utilize innovative and extensive environmental stewardship practices.

Sennett sought technical assistance from conservation organizations such as NRCS to plan and implement runoff feedlot storage facilities to protect waterways and maximize nutrient resources. The slatted barn, built in 2001, qualified for funding assistance through the NRCS Environmental Quality Incentives Program (EQIP). The Sennetts have also set aside 2.9 acres for a state native plantings program.

"When the Sennetts constructed their manure pit, they integrated the changes the barn brought to their operation with crop rotations, residue management, grass-waterway plans and a nutrient-management plan. Our organization has found them to be quite conservation minded." 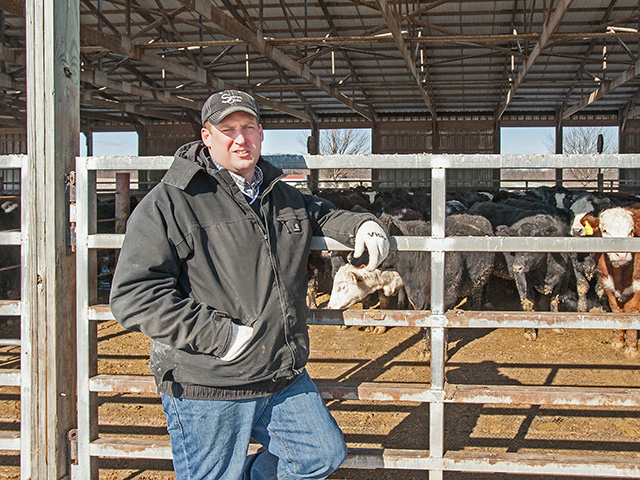