Some Midwestern corn and soybean producers may want to get into the cattle business, but with land still averaging more than $8,000 an acre, it's impossible to pencil in a profit using traditional methods. Jeff Morse, Council Bluffs, Iowa, did that math a few years back, and he couldn't make it work.

"We were looking for a way to bring my sons, Jared and Joshua, into the operation," he says. "We initially were thinking we wanted to expand our feeder operation, but we got caught with some heifers when the market went down, so we decided to expand with a cow/calf operation. Land price was the element that made adding pasture acres a cost-prohibitive move."

Morse was looking at buying pasture for 64 cows—a herd size that would have required around 160 acres. The purchase price for that much ground in 2011 around Pottawattamie County was a shocking $1.5 million. And Morse points out that in Iowa, those 160 acres would only have supported the cattle for part of the year.

"Providing you get ample rain and you fertilize well, you are only going to feed them from May through August [on pasture]. Maybe, if you're really creative, you get five months off those pastures. The rest of the year, you are going to have to feed hay, cornstalks or something," he says.

another Option. Morse started to consider a cow/calf operation that wasn't so traditional. What about raising calves under-roof 365 days a year?

He has now pulled the trigger not once, but twice, on hoop barns designed to do just that. The first year, 2011, he added a barn with a capacity for 64 pairs; then in 2014, he put in a second barn with a capacity for 128 pairs. These systems come with the added benefit of Morse being able to reuse cornstalk residue from where cows bed down on corn and soybean ground. The residue fertilizes and aids in the soil's biological activity.

Fast Adoption. Brent Bryant is managing director of Hoop Beef System (www.hoopbeef.com) and a fourth-generation Iowa beef producer. The Bryant family started selling hoop barns for cattle in 2003. Today, these structures are being used by both feeders and cow/calf operators across the country.

The Bryants not only provide the barns but also expertise and even their own composite-type heifer they believe adapts especially well to the controlled environment. Cost for a structure varies based on size and customization. Bryant says a general turnkey price for a cow/calf facility can be figured at about $1,400 per pair. Estimates show there are now close to 1,000 hoop-barn systems in the state of Iowa alone.

Morse uses the Hoop Barn System, with most of his cow herd coming from the composite heifers he bought from the Bryants. He says they are half Jersey and half Gelbvieh, bred to Black Angus or Black Simmental-cross bulls. Average cost for these bred heifers in 2015 was $2,400. Prices change monthly based on the market. At press time, Bryant said bred heifers were being contracted at $2,000 each.

"A lot of people will look at you and question the Jersey, but these heifers have decent size and the hips that will take the capacity of that high-performance black bull," Morse says.

Bryant says because they don't sell just hoop barns but also breed cattle and finish 3,000 to 4,000 head of feeders annually, they know from experience what will work in a given situation. He explains the original hoop barn system (there are multiple variations, depending on what a producer needs) is 36 feet wide with a 4-foot awning over the feedbunk and a center ridge vent down the length of the building to keep air circulating. End walls and roll-up doors are steel. Lengths of buildings vary.

Life of a hoop barn is between 20 and 25 years, with the fabric guaranteed for 15 years. Morse says he has seen no unusual wear and tear on his buildings, and believes they will last longer. Bryant says they've built systems in 14 states to date, with capacities ranging from 80 to 4,000 head. Recommended stocking rate is one cow/calf pair per 2 feet of running space or 2 feet of bunk space.

"Ten years ago, we saw the first wave of cows going under-roof into a year-round controlled environment," Bryant says. "The main force behind this move was a lack of pasture, affordable or otherwise, in the Corn Belt. We take calls now from guys from Canada to North Carolina, all facing the same challenges. If I have grass, and I look at the cost for a cow/calf unit on that ground, many operators can't make it pencil out. That's why we developed this system."

Not For Everyone. Bryant says some producers using the system are under-roof year-round, some for part of the year. It depends on the resources of each operation.

"We match those resources with the producer's goals to come up with the type of system that best fits their operation and their skill set," Bryant explains. He adds a cow/calf operation under-roof is not for everyone. "When we put feeder cattle under a roof, we can hide a lot of management flaws. The buildings allow people who aren't the world's best managers to do a great job of feeding. But the opposite is true if we're talking about a cow/calf operation. If you are a below-average manager, this will expose flaws. This is not for everybody, and it doesn't solve all your problems," he stresses. "If you just want to check cows once a week, this is not the best choice for you. You will be with them every day. You will need an up-to-date vaccination program, a consulting veterinarian and a nutritionist. Those are important elements in a profitable operation. Once you have cows under-roof, it's not a hobby, it's a professional operation."

Grant Dewell, of Iowa State University College of Veterinary Medicine, agrees cows under-roof necessitate more intensive management. He says calves born in this environment can be more prone to scours and respiratory disease if management is anything less than excellent. The reason is partly because calves are in close proximity to each other, but it also can be due to something rare in a pasture environment—cross-fostering among cows.

"The colostrum a calf gets from its dam is so critical to the immune function of that calf the first couple of months of life," Dewell explains. "In confinement, we sometimes have problems with cows that have strong maternal instincts trying to clean other cows' newborn calves; sometimes, they will do this to two or three calves. Once they clean that calf, it will nurse them, but since that cow has no colostrum, the calf won't get the immunity it needs."

Dewell says this makes it critical that cow/calf producers working in this type of controlled environment have management in place to ensure calves are nursing from the right cow as soon as they are born.

In the hands of a good cow/calf producer, even with these type of challenges, Bryant says he has come to believe a roof can be the best tool to get the highest number of live, weaned and healthy calves. It eliminates weather losses and deaths to predators, helps ensure cows maintain the best body condition conducive to rebreeding and makes it easier to spot and treat health issues in a timely manner.

In Morse's case, breedback on the herd is at 91%. He feeds cornstalks, supplemented with distillers syrup from a nearby ethanol plant. Calves get creep feed and are weaned with their dams until moved to the feedlot.

Temperature Controls. When asked how these barns are heated or cooled, Morse explains the design makes both unnecessary. In the winter, cattle are out of the wind, and the ridge vent down the top of the building releases steam that can build up and cause lung problems. The cattle stay dry and out of the elements. In the summer, Morse opens the north side of the building and allows the natural airflow to create a fan effect through the barn. He adds there are no flies and no smell associated with the building thanks to its design and management that focuses on keeping everything dry inside the facility.

Morse's operation has three calving seasons balanced around row-crop work, the need to split bull usage and marketing. Those times fall around November, February and April. Asked if he can tell a difference in terms of disposition of cows under-roof and those on pasture, the producer says there is a big improvement in cows in the barn. He describes them as more docile and says, in most cases, they allow him immediate access to their newborn calves for tagging and inspection.

"I can go right up next to mom and welcome her baby to the herd," he says. "Most of these cows will let me put my hands on their heads and their hips. Honestly, it wouldn't take much for me to be able to walk up and start milking them, they have that good of a disposition. And as they get older, they just get tamer and tamer."

Growth Areas. Bryant expects to see the use of controlled environments for cow/calf operations continue to increase, especially in the Midwest. While some in the industry commonly refer to these systems as confinement, Bryant stresses that paints the wrong picture.

" 'Confinement' as a word has a lot of negative concepts," he says. "We are putting cows in a controlled environment where they have cornstalks to lay on; they aren't in the mud or the snow or the rain. It is absolutely the best maternal environment you can give a cow. We give her the exact food she needs. Our goal is that she never have a bad day. Even when we wean calves, it is a totally nonstressful event. They are already eating, and they are weaned nose to nose with their dams."

There's one more plus to the system, Morse says, that often goes unsaid. He believes it's about as green of a system as exists thanks to the use of the decomposed cornstalks from his fields.

"Before, we'd leave cornstalk residue on the ground," he says. "It takes about five years for it to completely decompose into the soil. If we take that residue off to feed and bed our cows, and then haul it back and spread it on the same ground, we've helped speed up nature's process, and we've improved the soil. We are, in essence, utilizing a waste product, and we don't have to buy commercial fertilizer. I believe that savings alone will pay for these barns. That is green. It's a win-win for me." 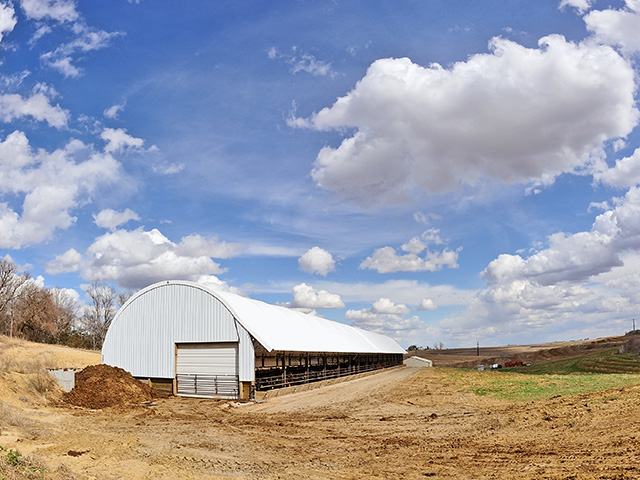