Given the choice between feeding hay to his cows in winter and selling the bales to horse owners at a tidy profit, Scott Stephens chooses the latter. His market for high-quality hay has grown well; there are lots of horses in central Florida.

"Our hay business has grown amazingly well over the last five years," says Stephens, who manages Ventura Ranch, near Lake Panasoffkee, for his Atlanta-based family. "We put up 4,500 to 5,000 round bales of Alicia coastal bermudagrass a year. The hay that gets rained on or has grown too rank goes to our cattle. All the rest is sold for horse hay."

As well it should be, since Florida has more than a half-million head, according to the American Horse Council. In total U.S. equine numbers, the state ranks third behind only California and Texas. But Stephens' cattle need groceries, too.

When the cold winds blow across the sunshine state, Ventura Ranch's dominant pasture, bahiagrass, goes dormant. Stephens then turns to his longleaf timberland for the forage his crossbred commercial cattle (primarily influenced by Brangus bulls) will consume during late winter. He chose to have cattle forage the timberland based on advice from his consulting forester, Ralph Jowett, High Springs, Florida.

Found Pasture. Inside fences built around his timber, Stephens lets the cows and calves graze under the pines on wire grass, the dominant grass found there.

"We looked at a map and saw we could run a mile of fence and pick up 1,200 acres of native grasses under the pines during the late winter, and cut our hay costs by 30%," he says. That pays for a lot of fencing.

Stephens used to grow 500 acres of rye every year for feed. But the cost to water it and get the ground ready and fertilize became prohibitive.

Forage work at the Florida Institute of Food and Agricultural Sciences shows that regrowth wire grass following burns improves TDN (total digestible nutrients) and boosts crude protein to about 9% compared with 5% before the burns. Stephens makes up for the nutrient deficiencies of the grass by including hay and supplementing with molasses.

Creating A Return. "We had [the] acreage that we burned anyhow with no return on investment," Stephens says. "So we have tried to make the land pay us back something by grazing cattle on it. This fits our program." Stephens tries to burn the underbrush and grass growing under this longleaf timber every three years.

"I'm using the wire grass in addition to hay when the bahiagrass and everything else is gone," Stephens says. "It's carrying my cattle through January, February and March, until the pasture grasses start to green up. When bahiagrass gets up again, the cattle go back to it," he explains.

With 1,200 acres of longleaf pines fenced, Stephens burns 600 acres every year. That gives him 600 acres of new grass and 600 acres that are recovering from being burned. "Fire works really well to thin out underbrush. The cattle nip the buds [as the burned brush begins to grow again]. But 85% of what they're eating is wire grass," he says.

Training The Herd. Still, trading lush bahiagrass pastures for wire grass under the pines isn't exactly like raiding a candy store for the cattle. Straight Brahman cattle would most likely do best on wire grass. "But the temperament of the Brangus is more in line with our plan," Stephens says. He recalls, with a laugh, his cattle's initial reaction.

"It was their first year in the woods, and it was a little sketchy," he says. "It's like you've been eating steak all your life, and someone tells you you're going to eat vegetables."

Stephens locked his herd in the timberland for three weeks so they could adapt. "They did it. They didn't lose too much weight for me to handle, and after a couple of rains, the grass sprouted back, and they learned the transition, coming and going as they pleased." 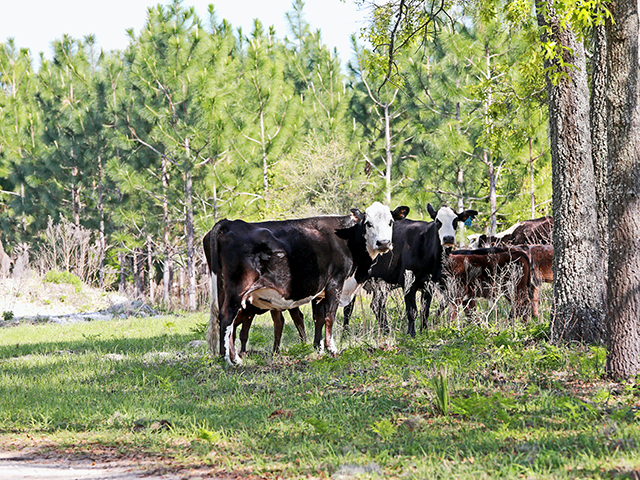